Mulch isn’t something most of us think about regularly, but choosing the right mulch to go around your home, is surprisingly important. Michelle from Dream Home DIY had me thinking about the pros and cons of mulch the other day.

Oh yes, my life is that exciting—but now I’ve got the pros and cons of mulch on my mind. After some research, I started to look into rubber mulch. Is rubber mulch worth it? Does it really work better than the standard wood chips? Honestly, until my journey down the mulch rabbit hole, I didn’t know that rubber mulch was even an option for home landscaping. Here’s what I learned about why rubber mulch is a smart choice. 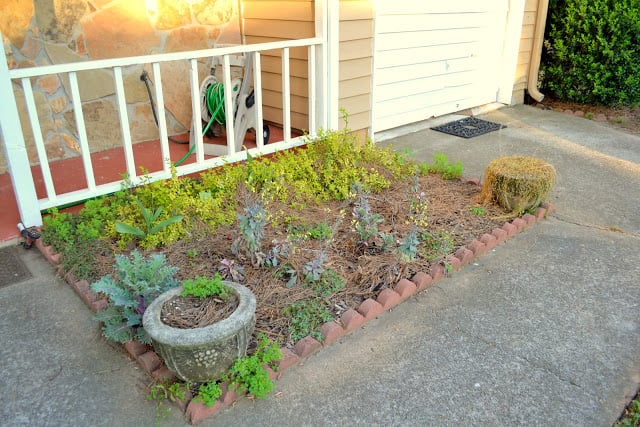 For a while now, I’ve been using the standard wooden mulch chips sparingly in the front garden, but it’s getting annoying. First of all, wooden mulch gets messy—it gets all over the place when the wind blows, scattering wood chips everywhere.

Secondly, I don’t weed my garden (like I should). The wooden mulch doesn’t block the weeds for me (like it should). I know that weeding is one of those chores that I probably should do more often, but the whole purpose of mulch is to help control weed growth, and frankly, I’m not seeing the wooden mulch living up to its potential.

Perhaps most importantly, the idea of putting a smorgasbord of wood around my cedar sided home to tempt termites gives me the heebies! Carpenter ants, termites, and bugs in general seem to really love to feast on that delicious wooden mulch. Wooden home plus wooden mulch seems like a recipe for disaster (or for bug dinner)!

So, once I’d finally found out that there was a rubber mulch alternative, I hoped it would be the right choice for me. My biggest concerns were the investment (I wanted the rubber mulch to be worth it) and the look. I didn’t want my mulch to look like ripped up tires around my garden.

Once I decided to take the rubber mulch plunge, I discovered it’s a really great mulch option. Here are 7 reasons why rubber mulch is totally worth the investment!

1. It’s the Last Bag of Mulch I’ll Ever Have to Buy

Okay, so yes, rubber mulch is a little more expensive than wooden mulch (which you can find for very cheap and even occasionally free). But is rubber mulch worth the investment? Absolutely!

The way I look at it, you have to figure your total cost of ownership. If rubber mulch lasts twice as long, then it’s worth twice the price, right? Well, hold on to your gardening gloves! Rubber mulch lasts for 10-20 years! You don’t need to spread mulch around for a decade! Plus, the rubber mulch doesn’t require as much upkeep as wood mulch—score one for the lazy landscape girls like me.

2. Rubber Mulch is a “Green” Choice

I know, it seems counterintuitive—rubber doesn’t seem like a natural option for the garden. But here’s the deal: rubber mulch is surprisingly eco-friendly because it cuts down on waste. Rubber mulch is made from recycled materials, like the flat tires I kept having problems with before I bought Rose. At least parts of those tires don’t have to wind up forever on the side of the road. The rubber for mulch is cleaned and shredded and made to look like wood. It’s a great way to recycle rubber that would ordinarily set in the landfill. Around 303 million tires end up in the landfill annually and rubber mulch offsets that waste in a small way.

Lots of mulch and mulch alternatives are also toxic to animals. They may contain cocoa and dye that could make your pets and wildlife sick. Many of the rubber mulch brands are certified non-toxic (and for dogs too)! Before you pick a brand of rubber mulch to buy, do your homework so you choose a reputable option.

Rubber mulch comes in a wide variety of color options—something to fit with any home exterior or décor. Even better, like your favorite lipstick, the color doesn’t fade! In the Georgia sun, this is quite a nice perk.

I don’t know if you’ve experienced the spring disappointment of wooden mulch, but most types of wooden mulch only hold color for one year at the most. Every spring, you’ll notice that it starts to look dull, faded, and even spotty. With rubber mulch, you never have a shabby looking garden–the color is usually under warranty for 12-15 years!

4. Rubber Mulch is “Fake,” but it Doesn’t Look Fake

Rubber mulch may seem like the knockoff handbag option of mulch, but honestly, it’s really quite “real” looking. The look was one of my biggest concerns because I didn’t want to spread some eyesore around my house that looked like chopped up tires.

Fortunately, I discovered that even though rubber mulch is made from rubber, it mimics the look of shredded chips of wood. Unless you really pick up a chunk and look very closely, you can’t see that the mulch isn’t wood. Meaning I don’t embarrass myself even more in front of my neighbors.

Okay, so as I mentioned in point one—this is the last bag of mulch I’ll likely ever need to buy (at least for the next decade or so). Yes, it’s a bit pricier, but it doesn’t breakdown like regular wooden mulch. So rubber mulch is a better value. How much more does it cost? Well, the wood is usually under $4, and rubber mulch is 2-3 times more. But as I said before, in a few years, it will pay for itself.

Moreover, it saves me money because it protects my plants. I don’t need to worry about them getting munched on or choked out by weeds. It looks beautiful and it adds to my curb appeal. In the long run, my investment in rubber mulch will save me money on landscaping, replacing plants, and dealing with the hazards of wooden mulch.

For bugs, wood mulch is a gateway drug to cedar-sided homes like mine. As soon as they see all that tasty wood surrounding a delicious wooden home, they’re ready to move in! One of my biggest concerns about mulch is that I really didn’t want to attract bugs to my yard and trap them close to my house.

Well, fortunately, rubber mulch doesn’t harbor insects (like termites)! It turns out they don’t like rubber at all. Not only will the rubber mulch protect my yard, but it also protects my house from wood-eating creatures. Bug protection is the number one reason why I’m doing rubber mulch over wood-based materials.

Finally, the other aspect of rubber mulch I love is that it’s not messy. Regular mulch blows around and ends up on your sidewalk, down the street, and in your grass. It tracks into your house too.

Rubber mulch, on the other hand, is heavy! Rubber mulch doesn’t blow away and can be kept at a shorter depth than wooden mulch—meaning you use less product and cover more ground. Less product helps alleviate the increased cost.

Now, I know some naysayers will discourage the use of rubber in landscaping. There are assumptions that the chemicals from the rubber leach into the ground and will kill your plants, or the rubber blocks out all moisture and will smother your plants instead. Some people are just not thrilled with using a less-than-natural material. However, multiple reputable organizations like the EPA have endorsed rubber mulch as appropriate recycled use of rubber tires. It’s perfectly safe.

Besides, if plumbing (or attempts at it) has taught me anything, it’s that water has no trouble getting into anywhere on the planet. Your plants will still get water and survive the use of rubber mulch. Of course, when it comes to choosing mulch for your yard, I say go with what works for you. In my case, that means the mulch option that requires as little effort as possible. Busy girls have things to do! 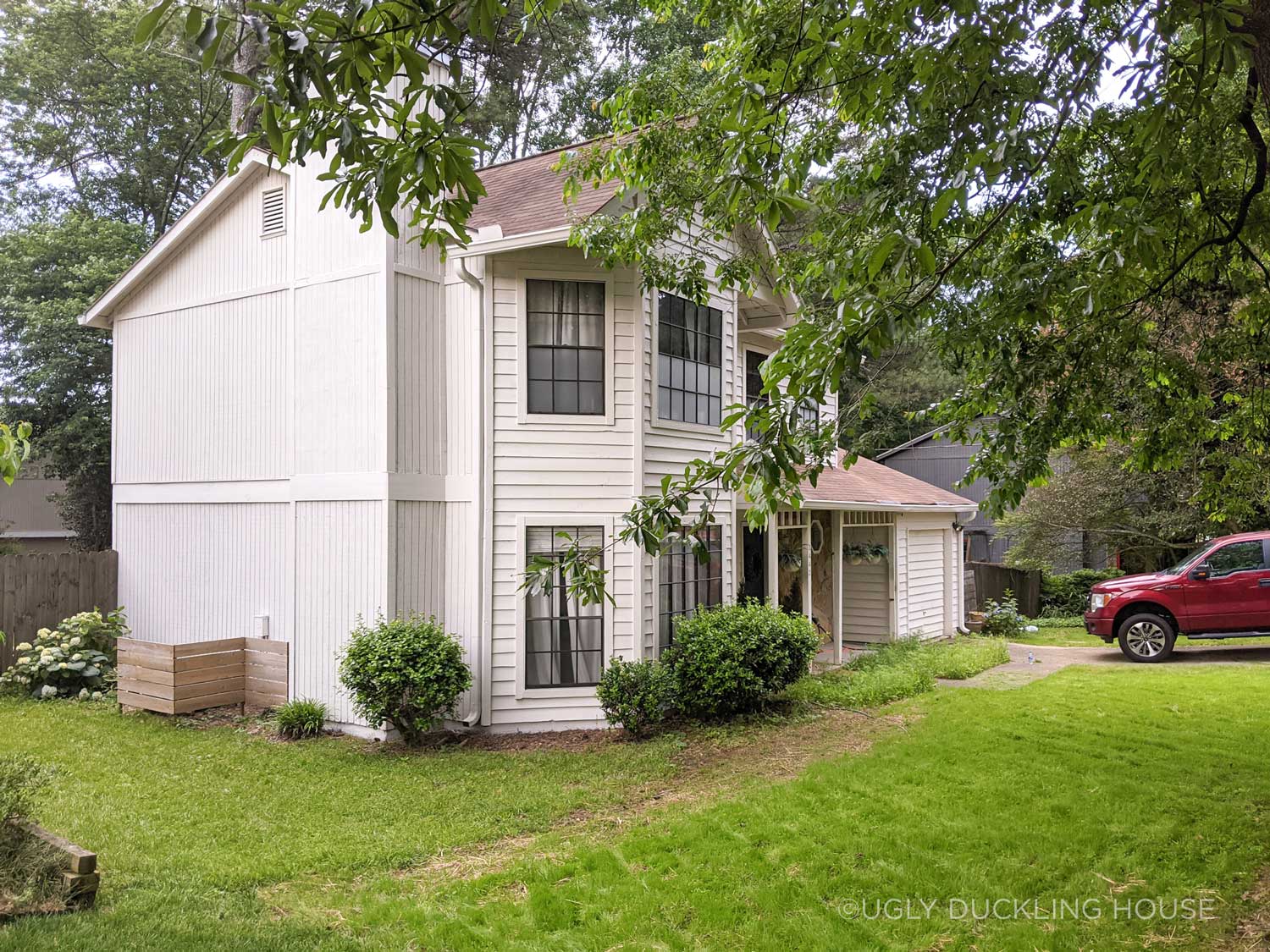 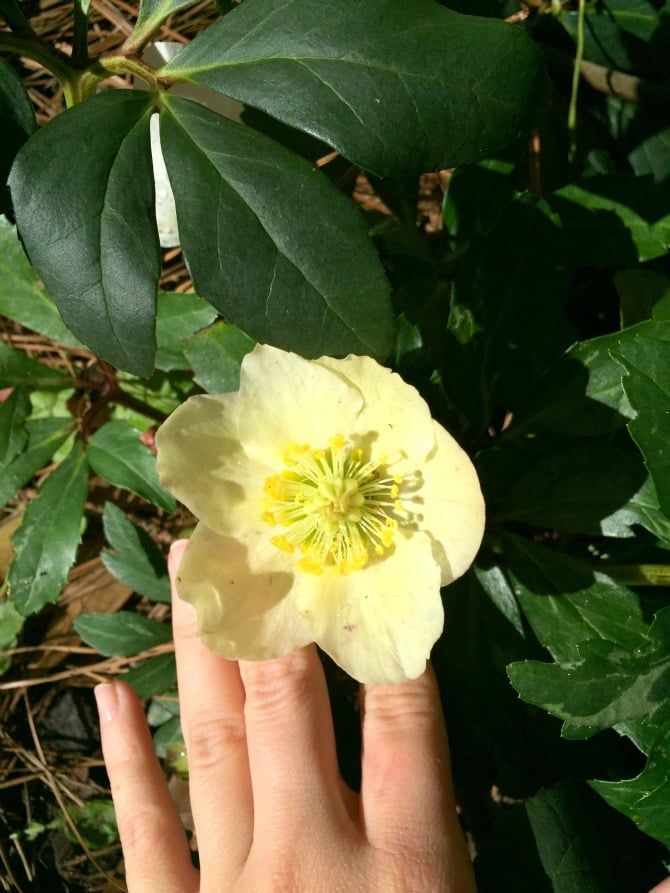