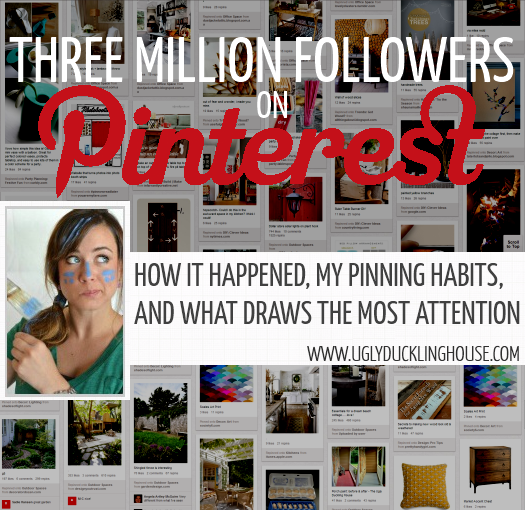 I know that sounds like a brag (and don’t get me wrong, three million people are following a random stranger, and that stranger happens to be me, which yeah, I kinda wanted to brag about just a smidge), but I think that about sums it up. I thought it was worth posting about. Because, um, it’s pretty freaking weird.

And to answer the very next question that always comes when I mention “my big number”:  how did I do it?

The answer isn’t going to knock your socks off. Because I didn’t. Pinterest did.  I was minding my own beeswax and just pinning away like most folks do when Pinterest decided to no longer do the invite-only thing. And when they did, my teensy thousand followers (which had been growing steadily for months and I was quite pleased with) suddenly became 15,000 in the blink of an eye on a random Friday evening. I thought it was a fluke (because I’ve been on Pinterest long enough to remember several server crashing issues they had at the very beginning due to their overwhelming popularity and growth) and just let it go, assuming that the number would go back to normal by the weekend.

Except it didn’t go back to normal. 15,000 became 50,000, then 200,000, and 500,000, and it wasn’t stopping. I was shocked. Thrilled. And clueless as to where it was all coming from. I told some of my Atlanta blogger friends and we were all baffled – I believe “damn lucky” was the specific phrase used (and I agree!). Thanks to Amy from For the Love of Georgia, I think I have some idea of what happened:  when Pinterest opened up their site and no longer required an invite to join, they also began suggesting pinners to follow for new users. I was one of the ones suggested.  It was simply a click of a button, and these new users were now following me. Which was incredible. Pinterest picked me?

So, I suppose that begs the follow-up question:  why did Pinterest pick me out of so many, when there are clearly other pinners who had a greater reach at the time? There were plenty with over 500,000 followers already that they could have picked instead. So while Pinterest hasn’t gotten back to me on precisely why they did (quite possibly this is still a complete accident), I’m just going to tell you what I see consistently with pinners who have a lot of followers, why I follow the pinners I follow, and what I seem to have in common with them.

1. I pin consistently, week after week.  You will usually see a spike in my activity on late Sunday evening when I’m either done writing a blog post or trying to overcome writer’s block for a blog post. But I do pin week after week. I take the time to correct or rephrase pins if I think they need to be and delete repeats if I realize that there was one that accidentally repinned twice.

2. I don’t pin only from my site, and I don’t only repin either.  I spend a lot of time around the blogosphere, pinning what I want, and I also follow several great pinners. So, there’s a little bit of a mix in there of popular and fresh content that may not already be pinned. I do my best to pin from original sources, too.

3. My largest board is my Home & Style board.  This is what Pinterest must be using when they recommend me. Every other board still has less than 20,000 followers, which is spillover for those who chose to follow all my boards rather than just this one. But there is really nothing different about this board than any of my others. It’s simply a matter of what new Pinterest users see.

4. I am selective about my boards and pins.  I don’t have a board for cute animals, babies, boards for celebrities (Zach Braff and Josh Turner are an exception to this and on my “Wish List” board, and I simply follow this board for rugged man inspiration),  or pin things just because I know there is a trend for it (I have Trend boards of my favorite ones, but what you won’t see are ones dedicated to chevron, wreaths, or cottage-y decor). There’s nothing wrong with any of these subjects; I just don’t like them enough to keep pinning consistently on them week after week. So, I don’t bother creating boards for them. It’s easy to feel like there needs to be a board for everything (you OCD’ers know who you are), but trust me:  the site’s purpose is meant to pin only the things you love; not what everyone else is into. So I stick to that. This also prevents me from having only two pins for each board (which I usually interpret with other users as “I have an account, but I don’t plan on using it”).

5. I label things in a way that makes sense to me.  I keep board names simple and consistent (and sometimes a little punny); all of my trend boards start with “Trend: ___”; all of the ones for holidays start with “Holidays: ____” – and I do my best to organize each board with like items (so Collections are with other Collection boards, Trends with Trend boards, and so on). I think it makes it easier for users to identify the boards they want to follow (maybe they are only into my ones about home decor?) and ignore the ones they don’t.

6. I just let the boards do their thang.  I will make an attempt every now and then to pin something from my site to my Home & Style board if I think it’s worthy (like my before & after shot of my front porch paint makeover). Does it give my site a boost? You betcha. But I don’t want to pin from my own site so much that the integrity of the board is lost (i.e., what is driving the new followers to follow in the first place). In fact, spamming (even if it’s from your own stuff) is considered a violation of Pinterest’s policies, so the last thing I want is to have my account shut down.

7. I don’t share boards, don’t participate in Pinterest-only promotional giveaways, and I don’t get paid to pin.  I am rejecting every. single. invite. from spammers to join their boards. I am getting flooded with them. I finally figured out a way to block them (there is one that kept inviting me, day after day, and I really would like to poke them in the eye). But I’m doing this for the same reasons I’ve already stated:  I want to keep the reason I’m pinning and what I’m pinning consistent. If I do a giveaway or a blogger I like is doing one, I might pin it to spread the word. But I haven’t been participating in those create-a-board-for-brand-x-and-pin-only-our-stuff-to-win-x contests. It’s just a personal preference. I also haven’t seen that there is a legitimate way to generate income off of my Pinterest following that doesn’t annoy the hell out of me (and I have searched for articles that claim to give tips on the subject; they all appear to have nothing figured out other than knowing that pinning leads to traffic on other sites; the act of pinning itself doesn’t produce squat). (Update:  After this initial post, I signed on to work with an affiliate company to start generating a very modest revenue from some of my pins. The one thing that changed my mind is that this company lets me have complete control over what gets pinned; they don’t choose the images, the brands, no minimums, or make me feel like I’m obligated to pin anything I wouldn’t ordinarily already have pinned on my own without being paid.)

So, there you have it. Consider me one lucky board… er, broad. Got any of your own Pinterest advice to share? I’d love to hear it.

(Oh, and don’t forget, tomorrow is the day to share your project for the Pinterest Challenge – it’s odd to share two Pinterest related posts this week, but today’s was based on the numbers. Tomorrow will be full of great DIY projects, so be sure to check it out!)

(One more thing:  in case you were wondering, Pinterest isn’t paying me to mention any of this, nor is tomorrow’s Pinterest Challenge paid either. I just thought it would be fun to talk about. Happy Monday!)

While every effort has been made to ensure the accuracy & effectiveness of the information displayed on this website, The Ugly Duckling House is for entertainment purposes only. All tutorials and demonstrations are not intended to be professional advice (nor substitute as such), and I make no guarantees as to the procedures and information here. Creating with my suggested methods, materials, and tools is under your own risk. Please ensure you are following proper guidelines with anything used, and seek professional advice if you don't know how to do something! Read my complete disclosure here.
110 shares