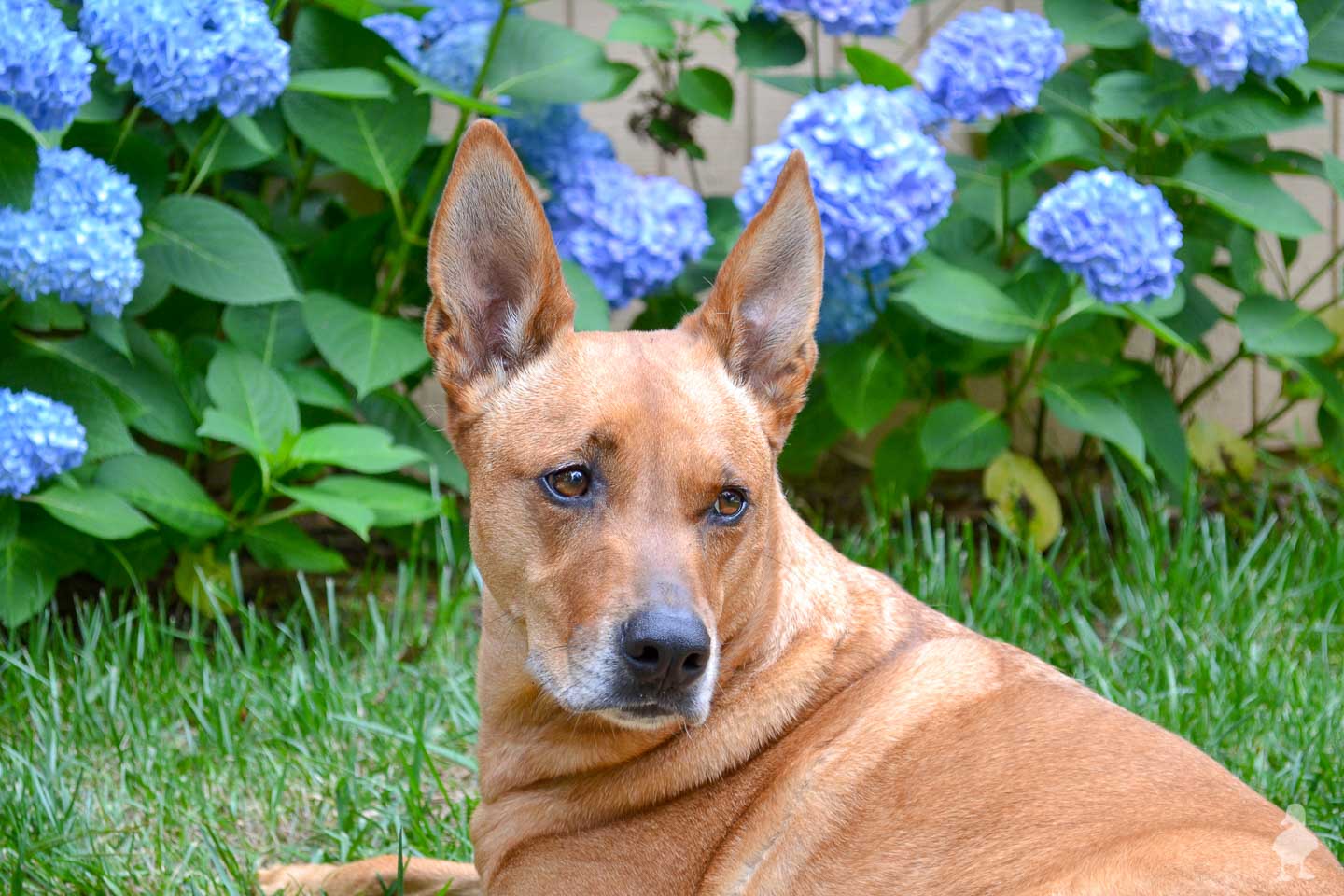 This post is, more or less, a treat for those of you who love updates on Charlie and have asked about her new life with K & Stella moving in.

This summer was the first full season that Charlie and Stella have lived together (in case you missed it, here was that announcement back in February). So far, it’s been going great, though we’ve had to adapt as we go to new routines, different pet quirks, and just kind of let the dogs sort the details out for themselves.

As much as I’d like to make most of my posts DIY-friendly and informative/full of tips, sometimes, I just plain want to document some of these memories to go back and read someday. So, I thought it would be a great opportunity to just share a ton of their cute photos of the pups from this spring and summer. If you’re the all-DIY-all-the-time type, then I’ll also be sharing tips for keeping the pups cool this summer in a separate post, and I’ll interlink that when it goes live.

Charlie has been simultaneously curious and aloof at the whole backyard build thing. She LOVES the new deck and perches on it whenever she goes outside. I think it’s just a higher spot in the yard to make her feel like she’s getting a good survey of her domain. She’s the ever-dutiful watcher of things. 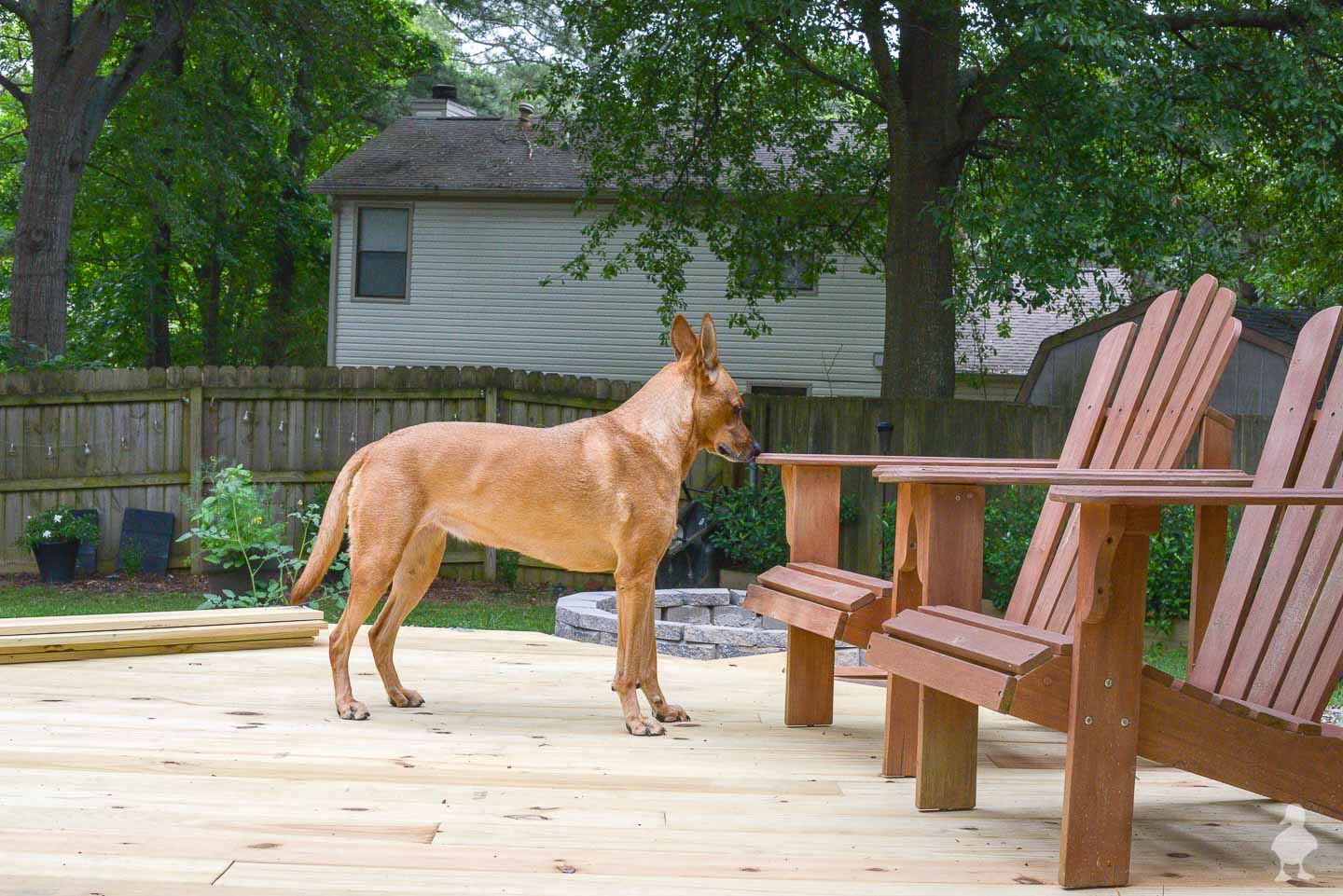 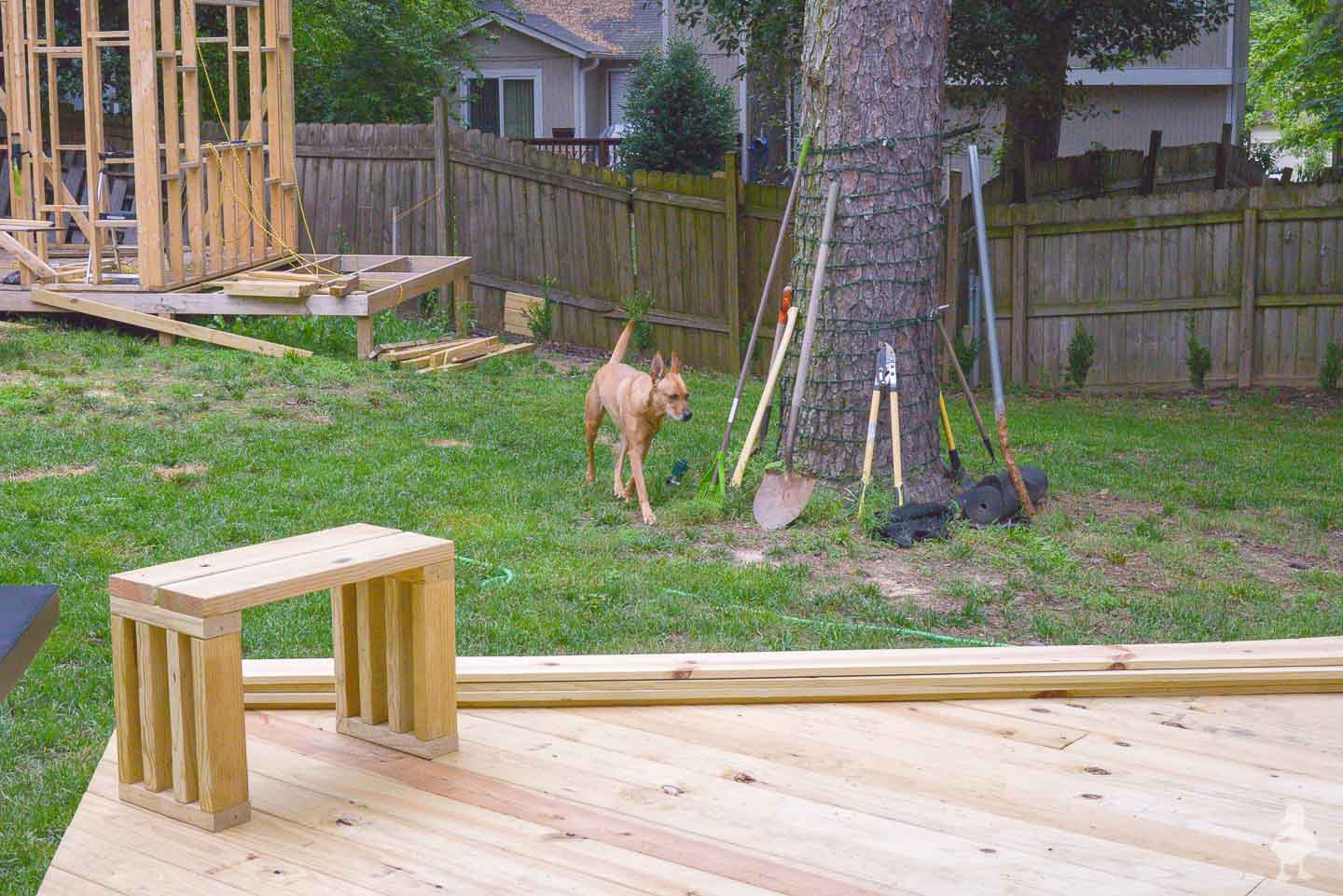 (that scrap wood bench can be found here – free plans too!)

Charlie has adapted to being a “big” sister pretty well. While I’m not 100% certain of Charlie’s date of birth, she was born in the spring of 2011, which makes her just a few months younger than Stella. But because of how much bigger she is, Charlie and Stella both seem to agree that Charlie is Stella’s protector. Stella takes cues from Charlie on when to bark at possible intruders (aka, the mail guy and/or neighbors), and Charlie will put herself between Stella and any perceived harm. 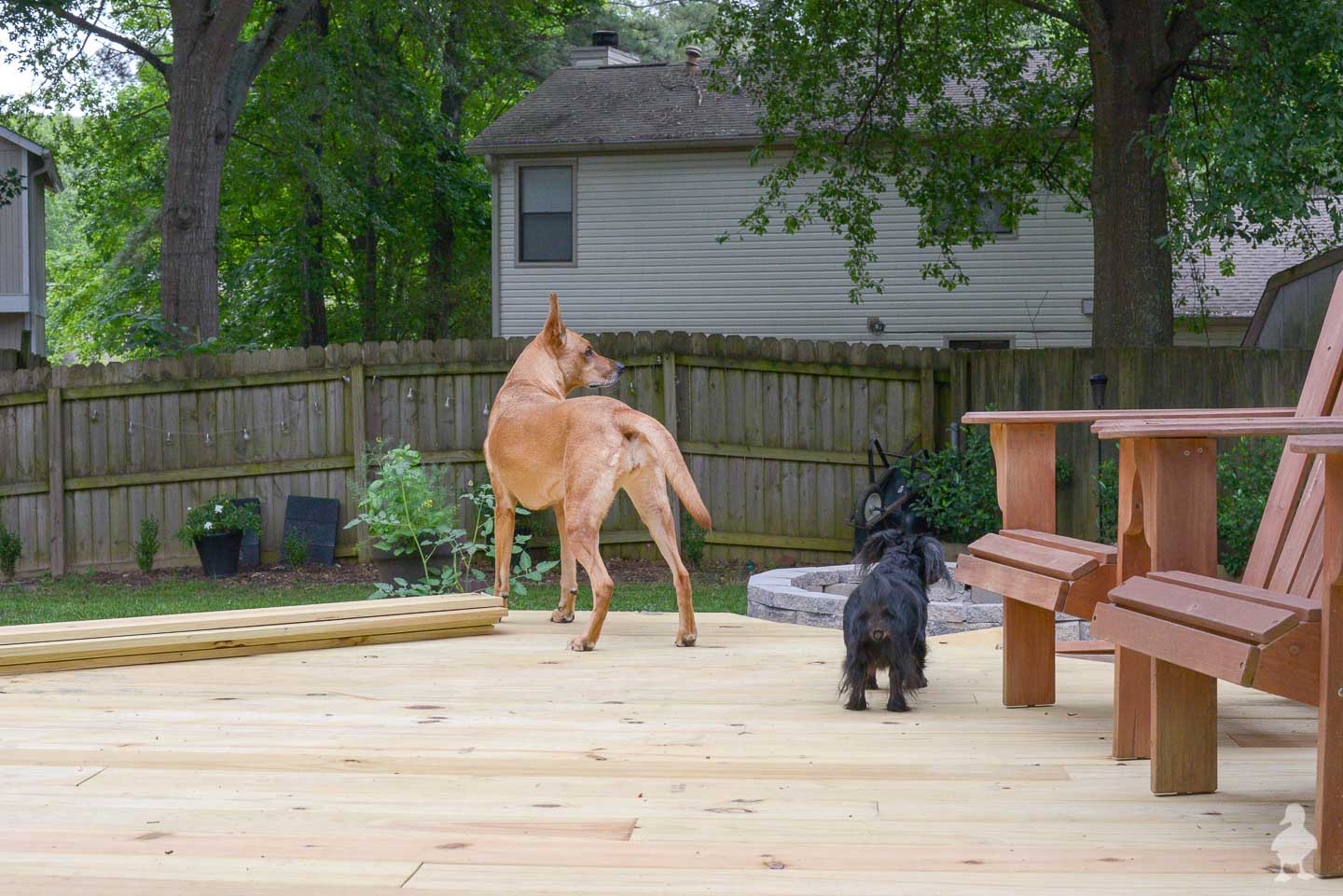 For instance, when we last took them to the vet, Stella was taken by the nurse and got her shots first. Charlie paced around the room until she returned. Charlie sat in front of Stella when they were reunited, making sure they didn’t take Stella again (❤️). But, the joke was unfortunately on her, because Charlie needed to be grabbed for her shots next!

Charlie is a bit clumsy, so she doesn’t always notice when Stella walks underneath her. I guess the blame is really on both of them, since Stella should probably learn not to go hiding under Charlie’s feet when Charlie is excited and jumping around.

But, Charlie seems to know how to be very gentle, too. Whenever Stella gets in the mood to play, Charlie pretty much just allows Stella to jump at her face, nibble on the folds of her jowls, and pester her (well beyond what I think I would have patience for).

Charlie has also become more of a homebody. She is happiest when all four of us are around, and noticeably paces/worries if one of us is gone or breaking routine for too long. I think as she gets older, she’ll crave more and more routine. Some days, she still seems like the goofy puppy who didn’t know how to use her limbs. Other days, I realize how gray her muzzle has gotten and how much she seems to enjoy a Sunday of nothing. [sniff]… I just love this girl. 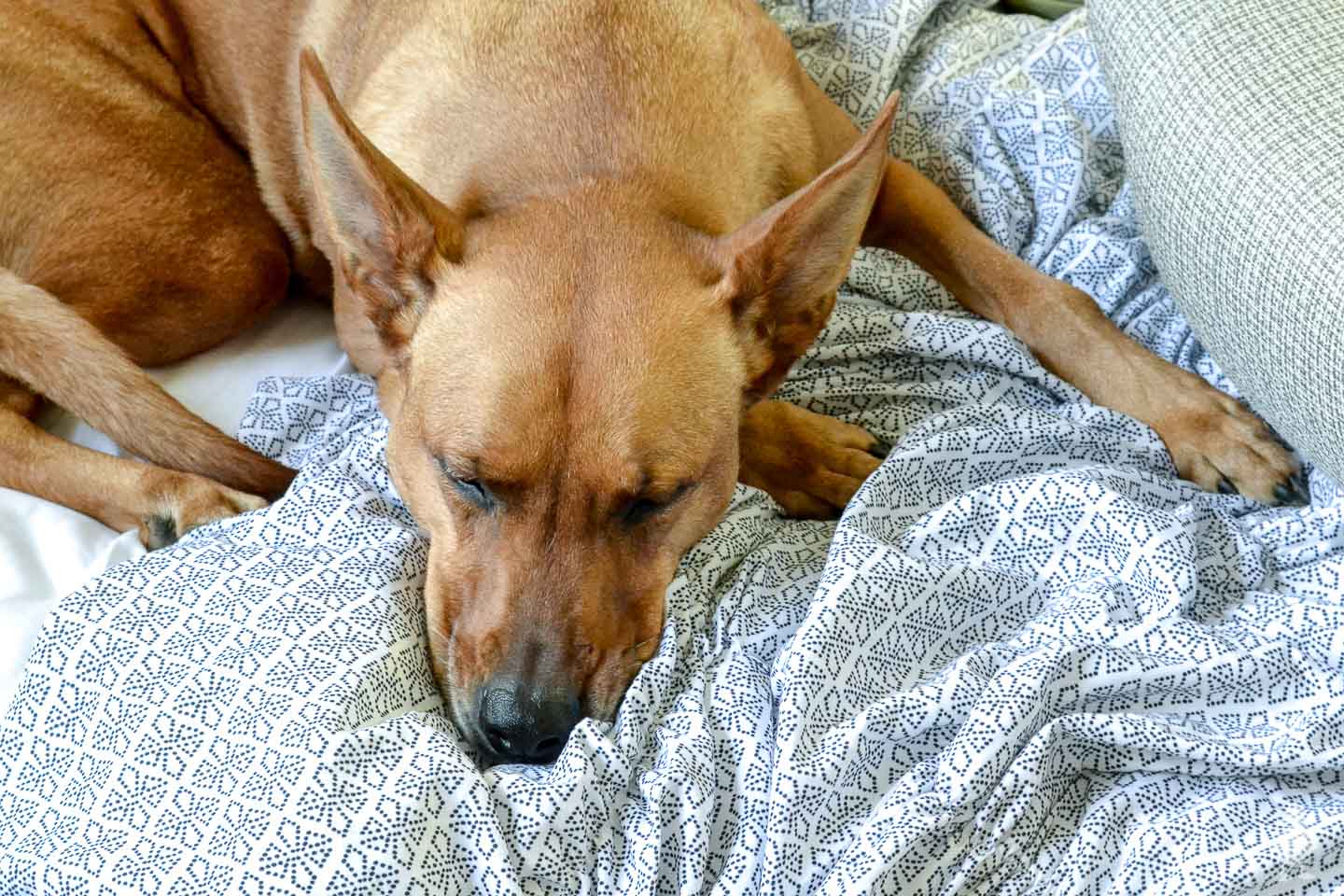 Stella flat-out LOVES that I’m home during the day for work. She does this really cute thing where she crawls up onto K’s pillow to snooze as he gets ready for work. But as soon as she feels like she wants me to be awake too (or I crack ONE eye open just a LITTLE), she leaps on my face with her little paws outstretched and kisses/nuzzles me until I’m up. I am not at all a morning person, so I think the universe has given me the one wake-up routine where I can’t get cranky. It’s too adorable. 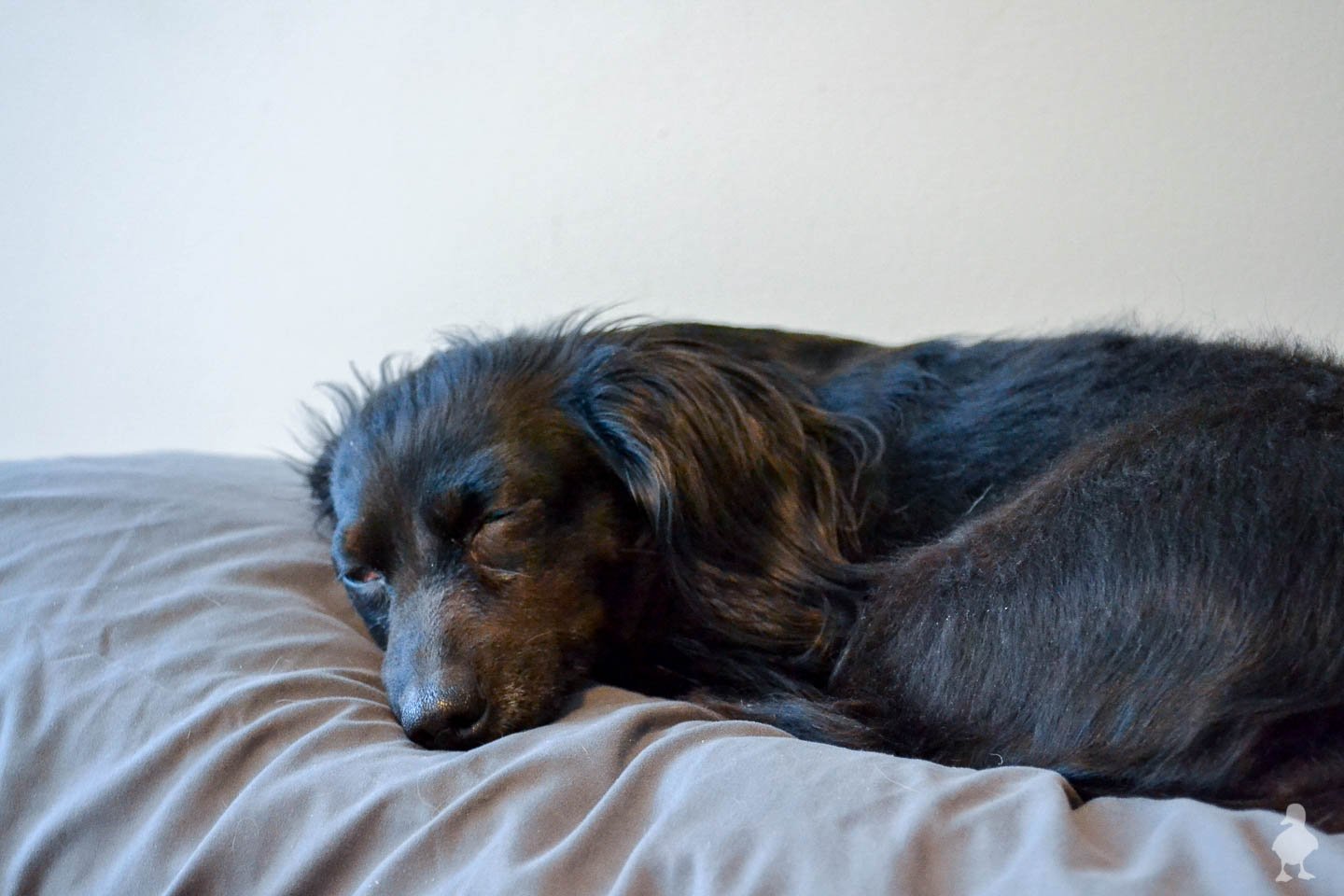 Stella has also learned Charlie’s barks. She knows the difference between what we call Charlie’s “protest bark” (such as if she wasn’t fast enough and the patio door was closed before she realized we’re now in the back yard) vs. the “POSSIBLE INTRUDER OR FOOD DELIVERY” bark vs. “K’S HOME K’S HOME” bark.

She’s also good at milking how tiny she is for all it’s worth. She knows I’ll baby her, and she knows how to tug on K’s heart strings like a master manipulator. She has thing she does where her eyes seem to take up 90% of her tiny body, and you turn into a puddle of love and obedience and yes you can have my last bite of my sausage biscuit, anything for you. 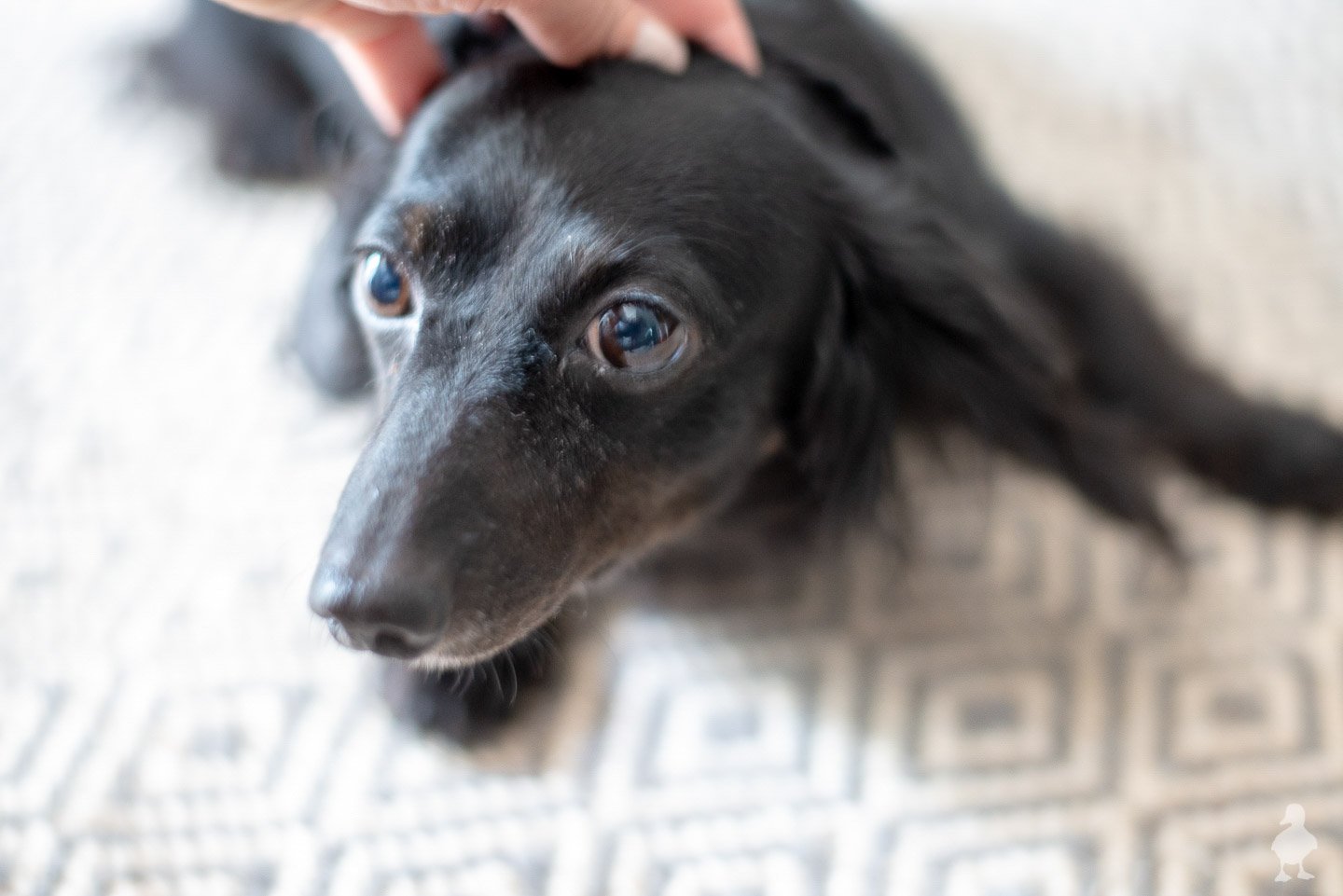 Stella also LOVES to hunt. And dig. And look into trunks for mystery animals (the photo below is a bird bath K’s parents will scratch on to make her think something’s inside of it). She can dig giant holes in no time at all. But again, her size is one of the funniest things, since she will flat-out disappear in my gardenia bushes or in the ivy that separates me from one of my neighbors. Sometimes, all you see is a little shimmy of the plant to know where she is. She’ll emerge covered in dirt and looking very proud. I have a video in my IG Stories of one of those dirty bath times, so I’ll try to convert that for you guys here so you can see!

Also… she has a puppy blanket. It’s SO CUTE. It’s actually K’s childhood comforter, and now belongs to Stella. It matches literally nothing in the house and is thin and covered in pilling, so it’s a design blogger’s nightmare. But it’s so adorable how she knows it’s “her” blanket whenever it comes out of the wash. 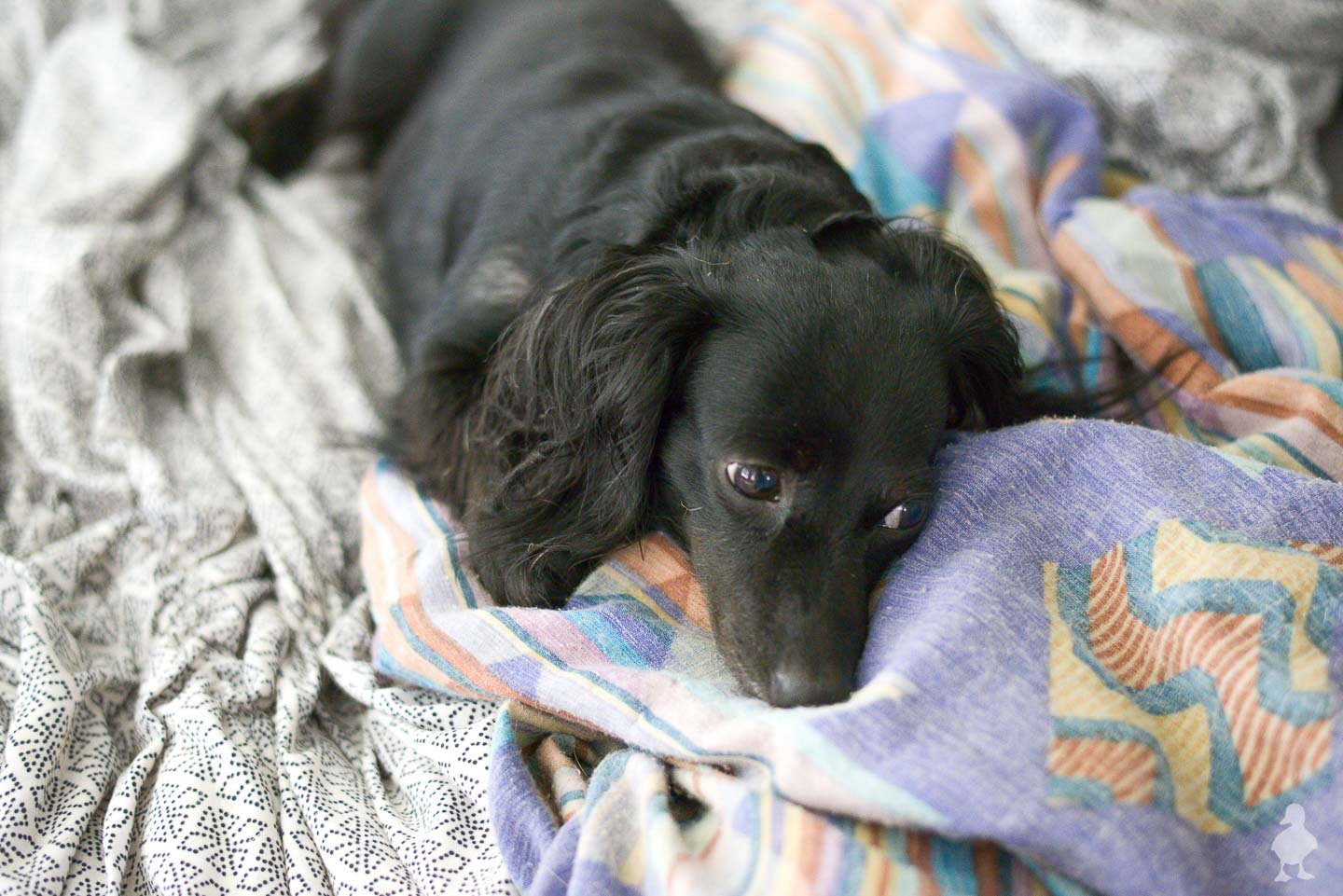 Charlie has been training every night with K on their nightly walks around the neighborhood. I’m sad to admit that I was pretty terrible about leash training before, so I’m glad to see that she’s gotten a lot better! 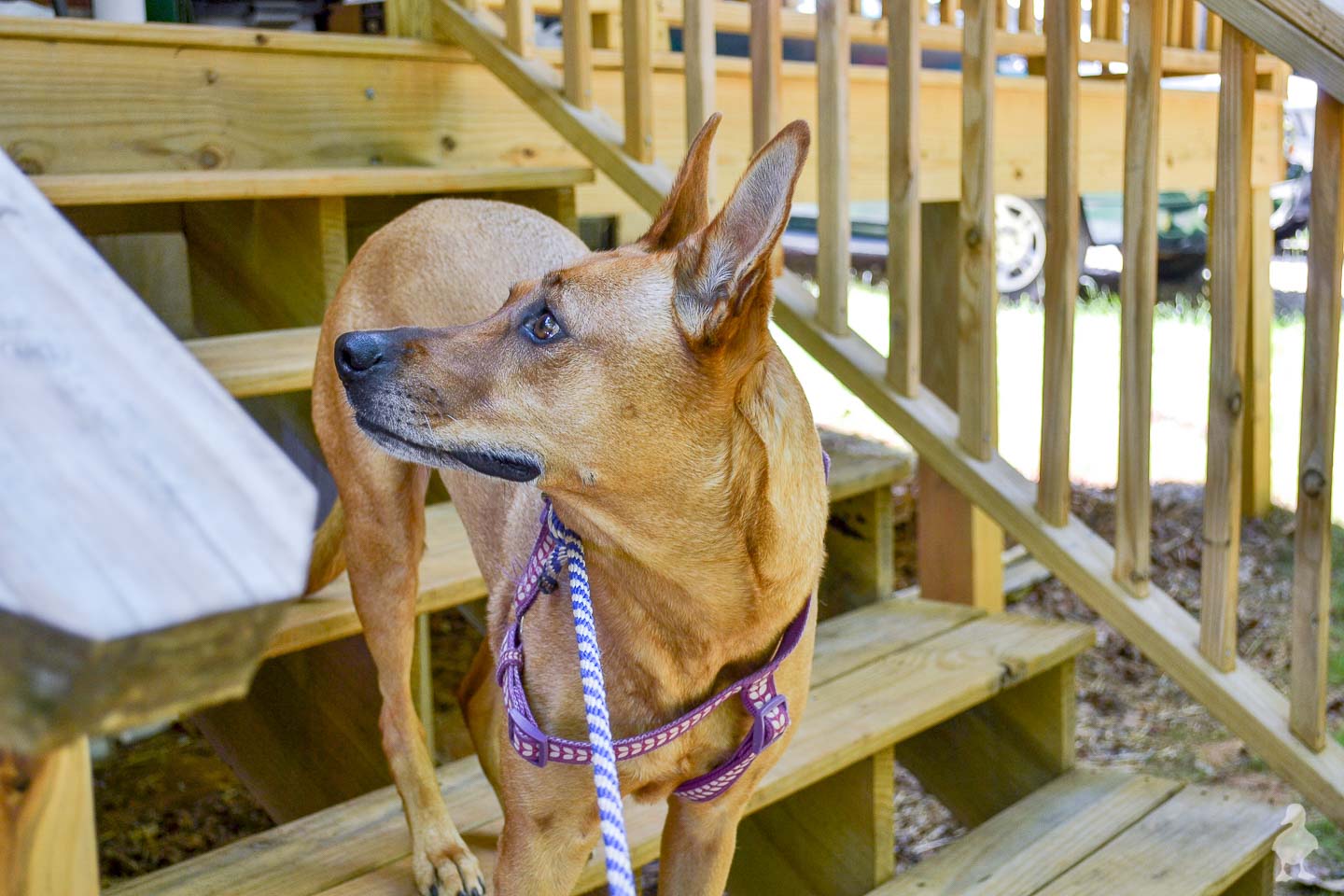 With the summer months and humidity being so brutal on them both, I’m careful to let them out in the mornings when it’s cooler; it also makes for some cute photos when the morning light hits. 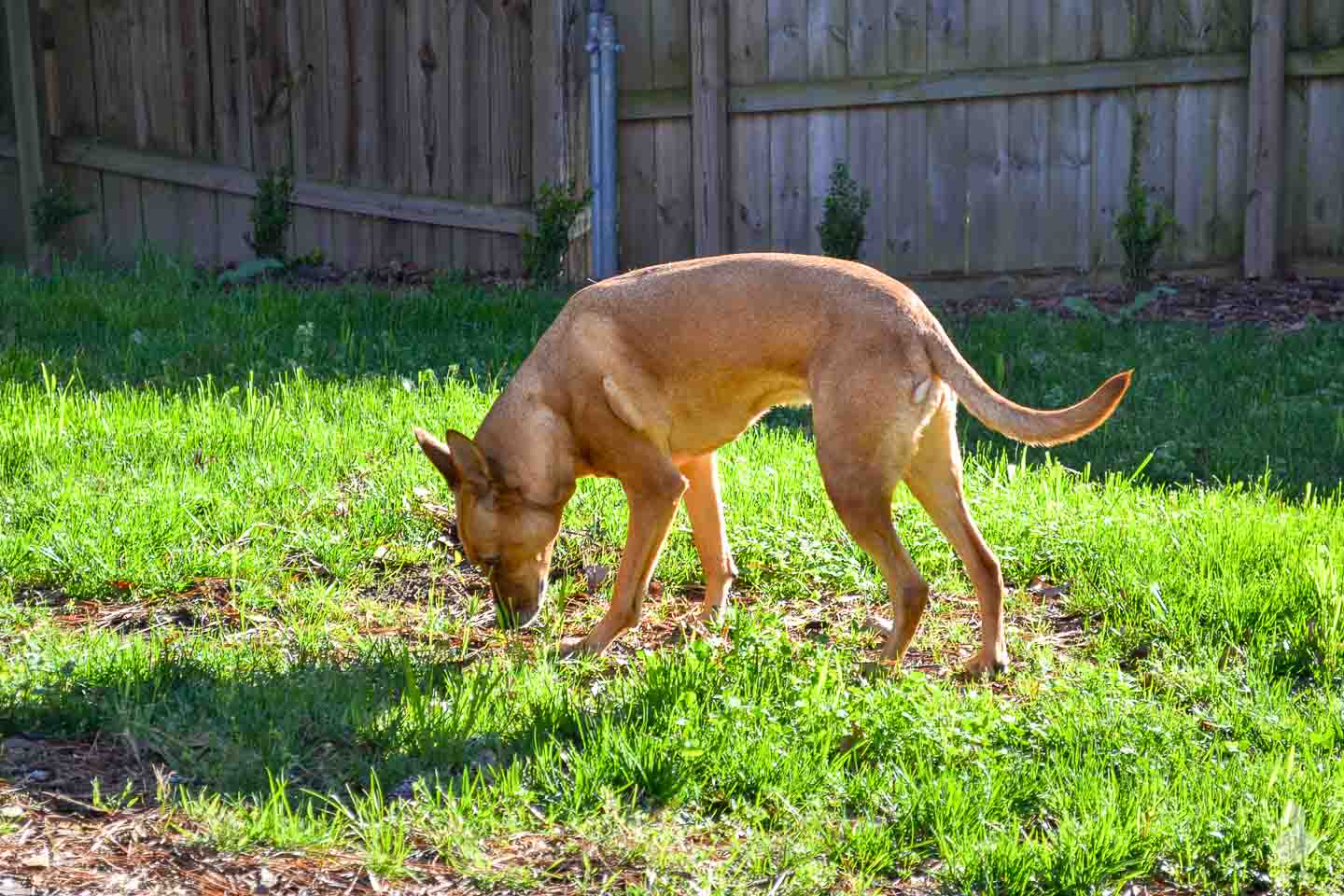 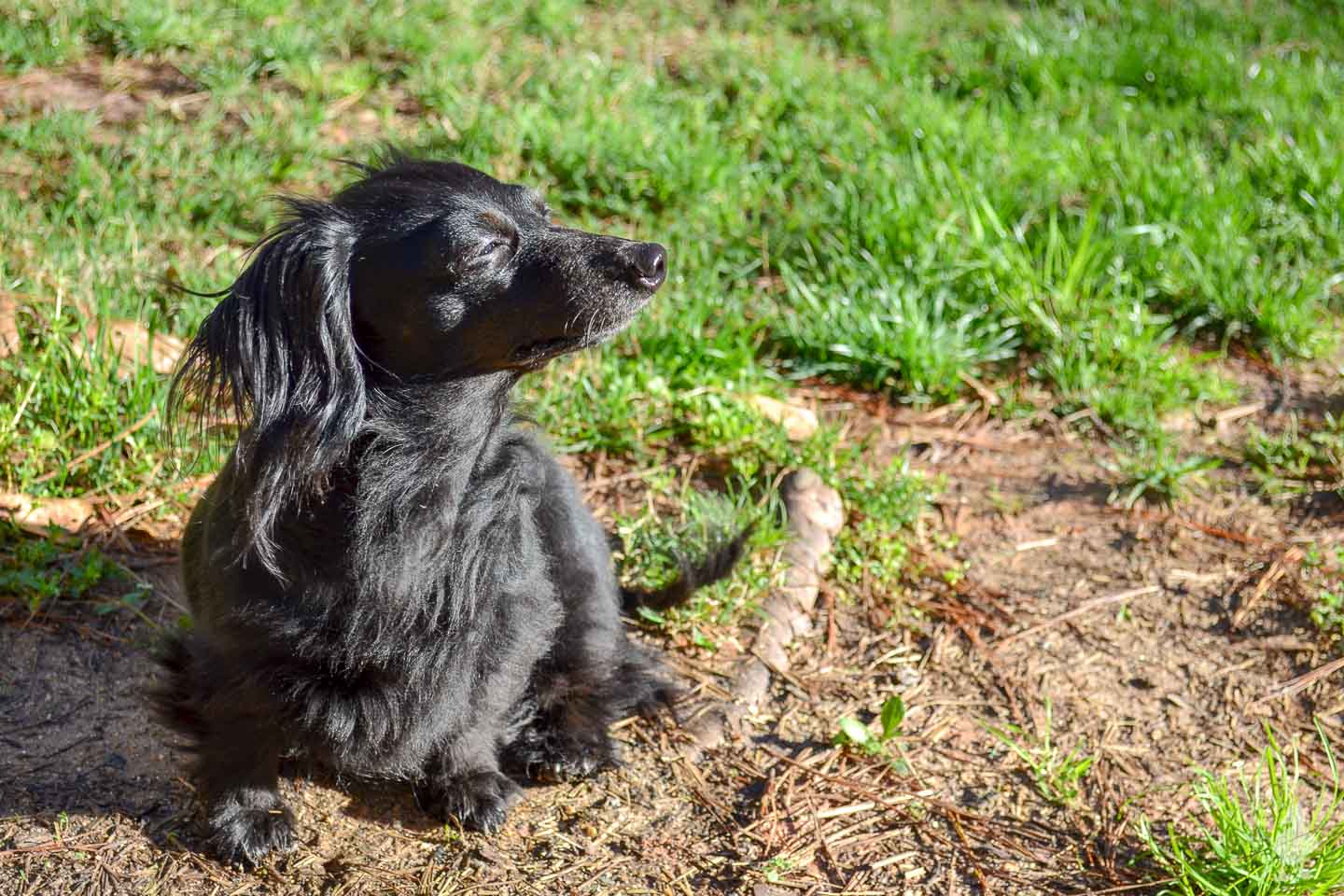 Ultimately, I think the pups are doing a great job at learning how to be together when they’ve both spent most of their lives being the only dog in the house. They aren’t really much for cuddling with each other, but they keep an eye on each other, follow each other around (Stella usually follows Charlie), and seem to miss each other when the other is gone (they reunite like they missed the other, but in a way like they don’t want to admit that they have). 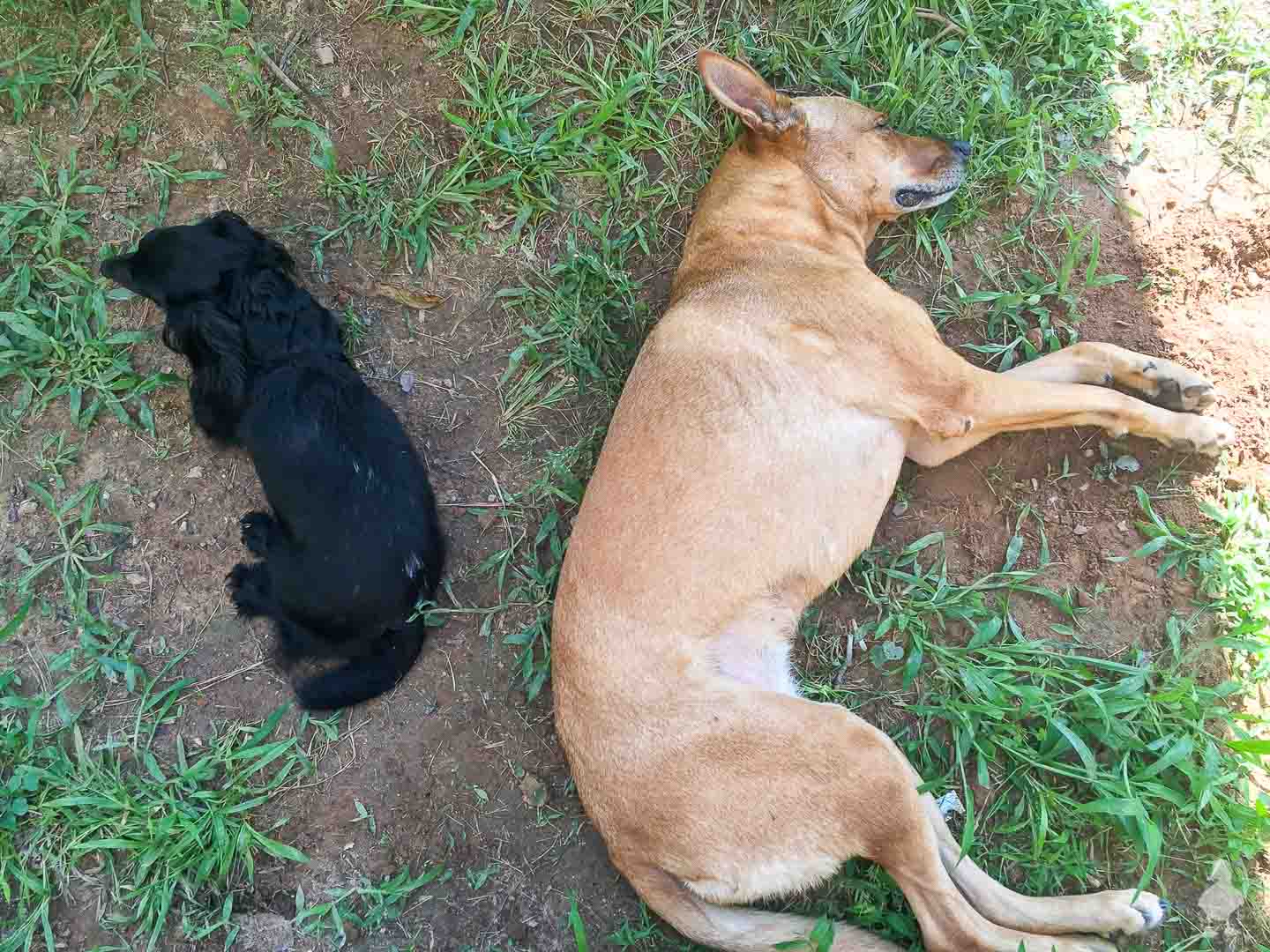 I hope you guys enjoyed the PUP-date… get it? Let me know if you want more Stella & Charlie posts and I’ll be sure to include them a few times per year. 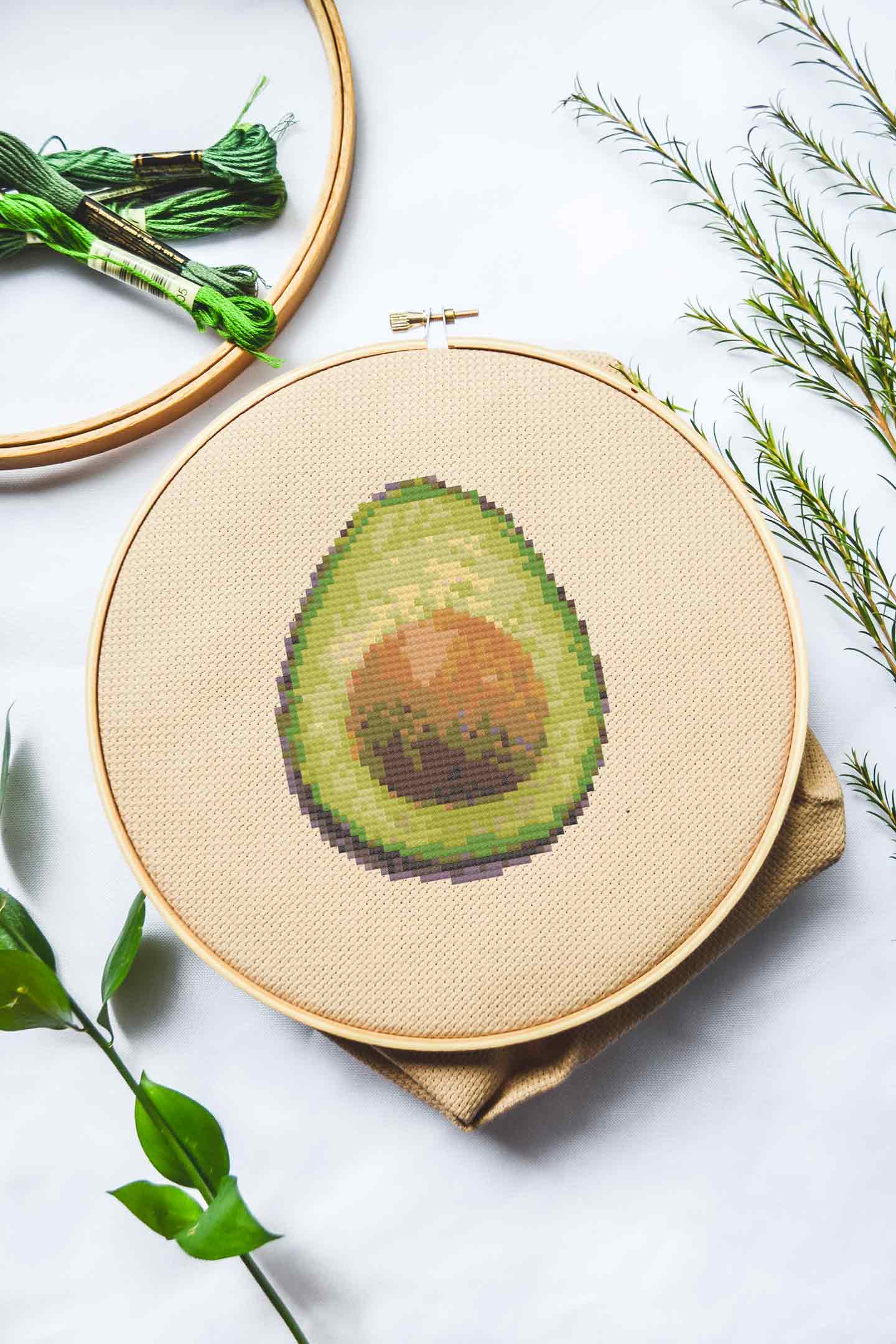 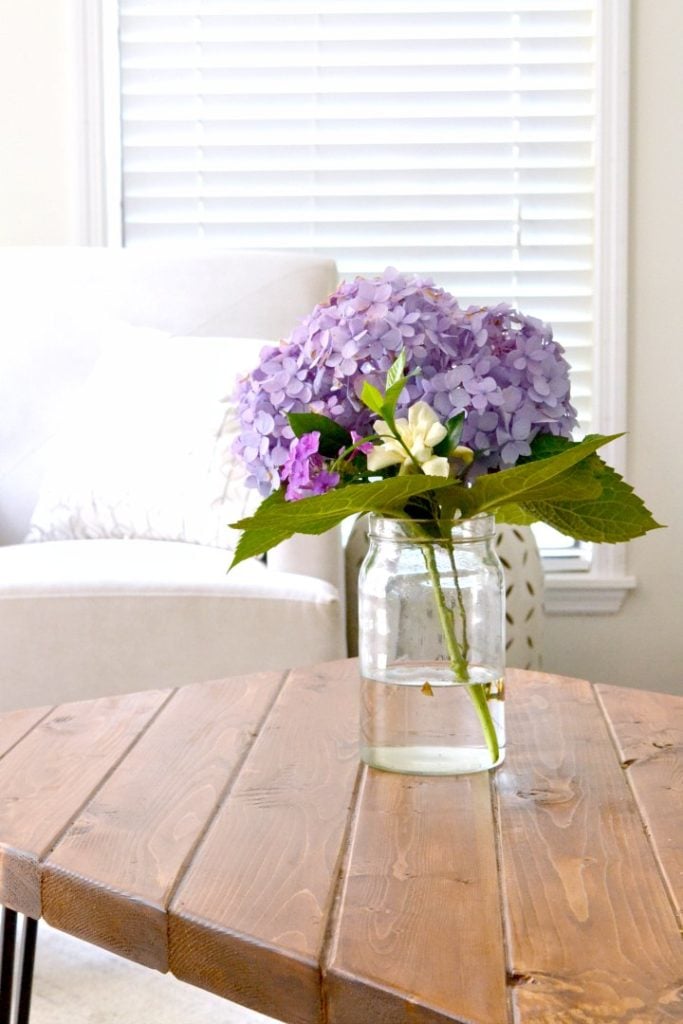 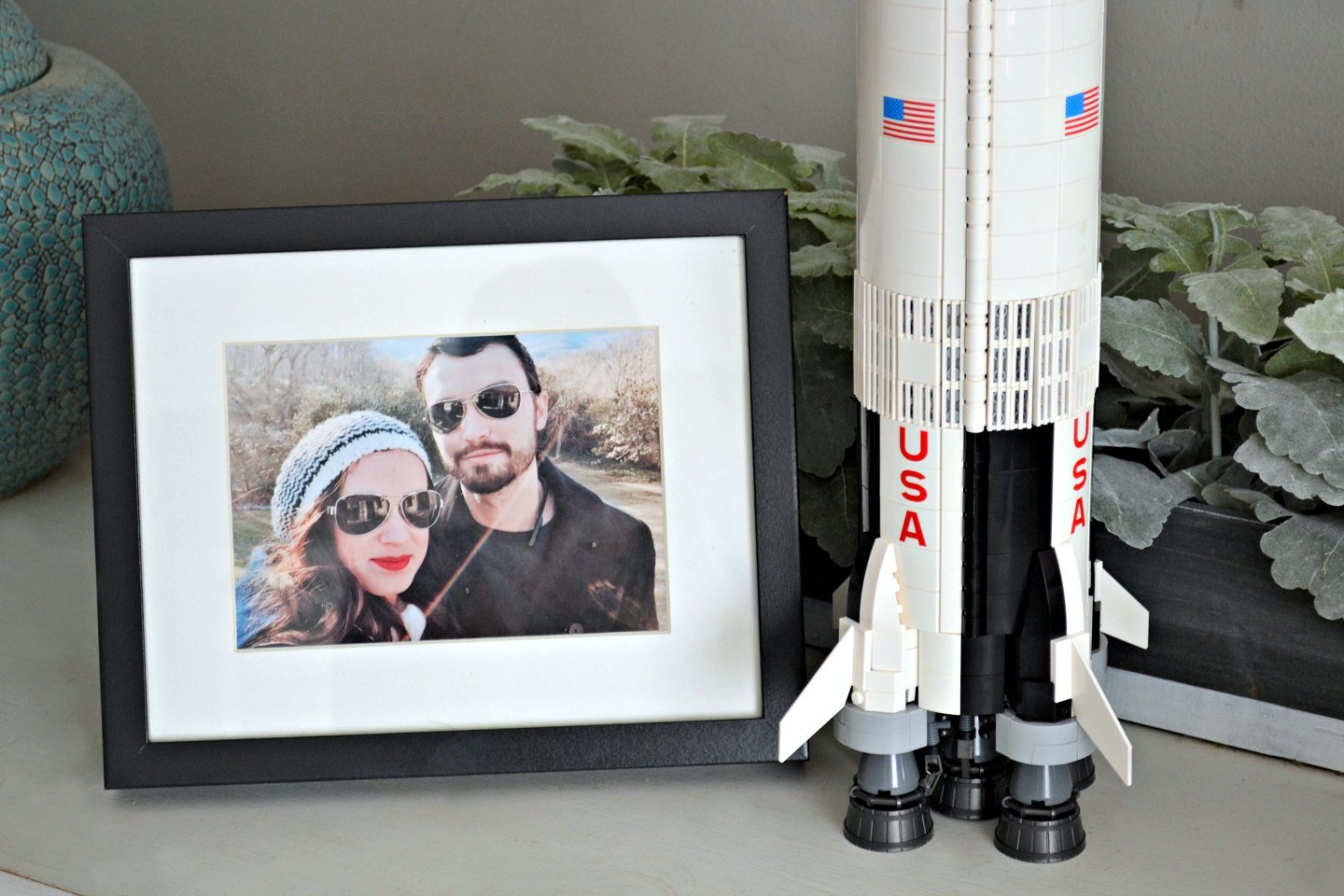 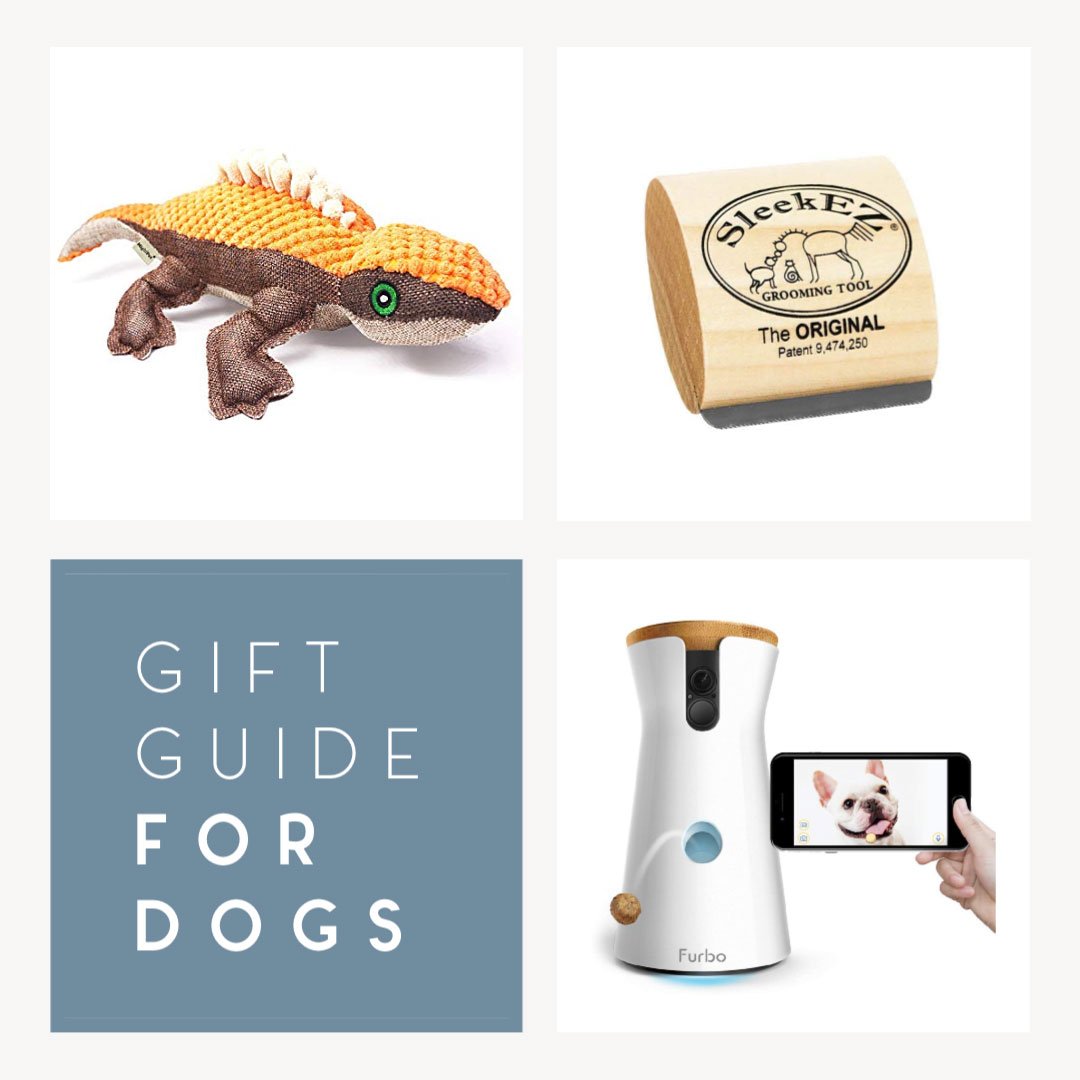