Pin
Share
Tweet
Yum
The list of six design books I have been wanting to purchase is now already reduced to five.Big shout-out to one of my readers, Paula, for commenting on my most recent Saturday on Six post. After realizing I have been blogging about home improvement for over two years but didn’t actually own any home improvement-related books, I picked out my top six – most of which were written by some of my favorite bloggers.When Paula commented that Ana White was in Atlanta for the start of her book tour (The Handbuilt Home

, just released!), I realized I had a fantastic opportunity to have a one-on-one chat with someone who truly inspires me. For those of you that are just finding out about Ana White for the first time: she is amazing. She and her husband built their home in Alaska by themselves. As in, board by board. And they’re still married. I know – I could stop there, but she went on to start her own blog and teach her readers how to build their own furniture. I started reading her back in 2010 when her site was called Knock-off Wood. And the “being inspired” part is no joke; she showed me it was possible that instead of buying a piece of furniture, I could just make one myself and save a lot of dough in the process. And then, I totally did. She posts easy-to-understand plans, gives advice for beginners, shares photos from the thousands of people she inspires, and is also in the process of building a Momplex with her husband (those posts in particular are my favorite!). She’s a badass with a nail gun and still has perfect hair – when I usually have paint in mine. The awesome part about Ana’s book tour is that it’s taking place at Home Depot. She is not only signing copies of her books, but doing a short demonstration from the book and doing giveaways of what she builds. And it gets even better, because if you spend $20 at Home Depot, you get the book. For free.  Gee, how hard is it to spend $20 at Home Depot??? I’m there at least once a week, and I spend way more than $20 a pop. 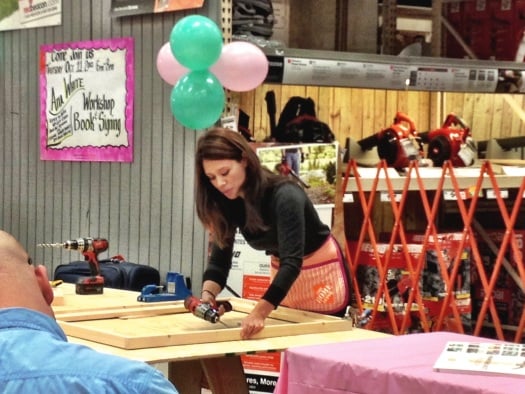 So, last night, I made a 30-minute trip after work to the Home Depot where she would be signing copies. I made it in time to catch the tail end of her presentation but took off around the store to see if I could find myself twenty bucks worth of things I need anyway (I needed a flat pry bar that would work well for removing baseboard and a pipe cutting tool for when I make my custom window treatments, which is easily $20 right there). On the way to searching for what I really needed, I took a peek down the tool aisle. It’s a sickness, people – I couldn’t help myself. But to my surprise, there was an entire rack on the end loaded with used tools. 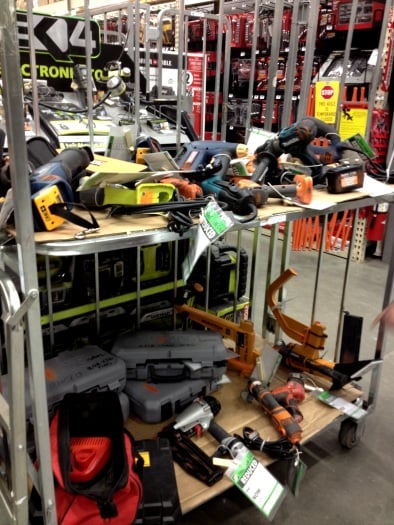 I am no stranger to buying a used tool from Home Depot. I’ve had some success with them. Part of it is because I always do research and look up reviews on my phone right when I’m in the store so that I know how the tool (if it were purchased new) would usually perform (because if it got bad reviews, I wouldn’t want to consider buying it anyway). And since the tags are marked with what is wrong with the tool, you can usually make a confident decision that the discount is worth the risk (My tips:  Don’t go for the ones that are marked as “slow performance”. You’re usually good when it’s only marked as “used/reconditioned”. And most of the tools in the used section come without a battery or blade if one is needed, so make sure that the steep discount won’t be full price – or more – if you have to also purchase the battery).

Apparently, I spent a little too long over in the tool section. After making my final purchases (almost bought a reciprocating saw but reconsidered after I found a broken part and knew I’d also have to find a compatible battery), I walked back over to the area where Ana had been doing her demonstration. Immediately, I met Paula and her husband (who were so very sweet to meet in person, and I forgot to snag a picture) who also informed me that I missed the giveaway. I guess I’d won and they re-drew when I didn’t claim my prize. No matter though, because the large display board that Ana built in-store was going home with them instead!

Finally, I had a chance to chat with Ana herself while she signed my book. Even better is that she recognized me from when I helped her with a demonstration at the Haven conference earlier this year (!!!). And I have to say, talking with her was definitely the highlight of my week. She is so down-to-earth and I am so thrilled that we had a chance to talk about everything from blogging, giving up control (going from blog to book involves a lot more people than just yourself, and that can be a strange new experience when a blog is all yours), unexpected joys and successes, and my own soon-to-be surprise for all of you (no, it’s not a book of my own, but it is exciting, and I’m hoping I can spill the beans next week). True to my nature, I also tried cracking a few jokes about how awkward it is to date as a single DIY blogger (“Hi, nice to meet you. What do I do for fun? I have a website. No, not that kind of website…”).

It was definitely an experience worth sharing. And that’s where you come in. Atlanta was only the beginning of her book tour, so you still have an opportunity to see Ana and get her awesome book! Next stop is Houston, TX, but you can click on the link above to see where she’ll be throughout October. 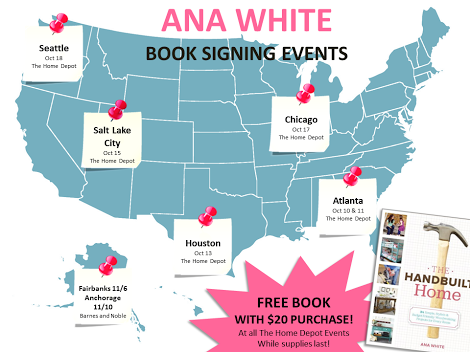 Many thanks to Ana, Paula, and Katie Bower (who had an Instagram pic from Ana’s first night in Atlanta and kept me talking about it). What a cool night!