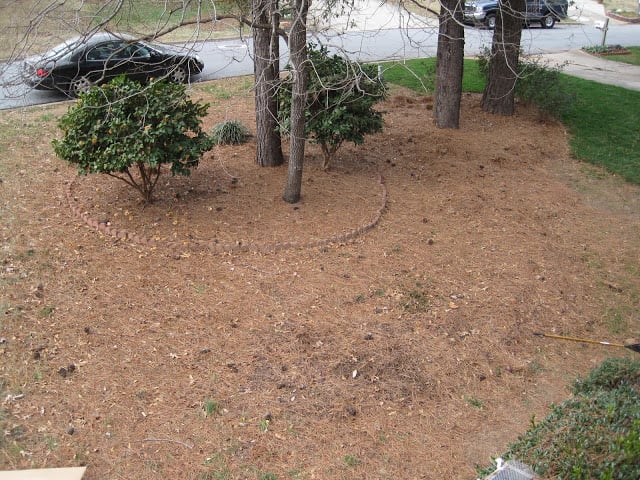 Last week, I took advice from a friend and decided to Craigslist (ha! let’s verb that noun, shall we?) my overabundance of pine straw for free to any takers (“you rake, you take”). Before I list anything, I usually try to find other listings that are similar to give myself a template.

While there were plenty of pine straw listings, none of them were for free, so I figured my chances of getting rid of at least a little bit were pretty good. After all, even if only one person was interested, whatever they took would be that much less that I would have to rake and haul to the burn pile myself. Plus, they would be getting a $3.75/bale value at the amazing low price of zero dollars. I liked the odds.

I considered it an experiment in a “one person’s trash…” kind of way. During the week, I had only two people contact me from the listing. The first one wanted to know how “clean” my pine straw was, so I sent him a pic from last year’s rooftop misadventure (where a bird’s-eye view allowed me to fully realize just how much pine straw there was in the front yard as I sat trapped on the roof). The quantity and quality were virtually the same, save for an extra patch of grass here or a missing pine cone there. 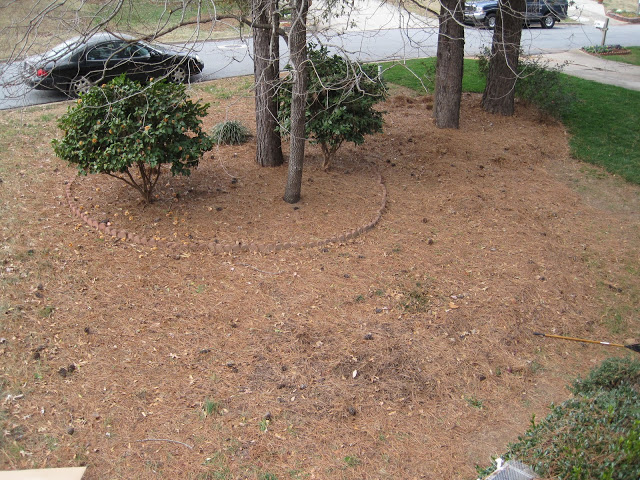 Realizing I’d left out an answer to what seemed to be an important question, I added the same picture to the listing to see if I could entice more interest. And it worked; a second person contacted me and asked if that was all that I had, or whether the back yard had some too; he had a large truck that he wanted to fill. I told him that I had five more pine trees in my back yard, and his immediate response was, “is Saturday good for you?”

It was. He showed up that morning with his son (who looked super excited, btw), two rakes, and a tarp. I told him he could take whatever he wanted from any part of the yard; after all, it’s not like I didn’t have more in the back. He cleared about half of the yard (which filled the back of his pickup) and then rang my doorbell to say that he was going to go drop off the load and come back for more. The next day, he showed up with his wife (even more excited than her son was the day before) and they raked up a second truckload. And the front yard?

Front yard cleared. And I didn’t have to rake a thing.

I don’t have a picture of my cleared yard to share, but they worked almost until sundown to get everything loaded (I thought it would be rude to try and sneak pictures). But imagine no pine straw; it’s basically a smothered and unkempt front lawn just like before, only greener and actually mowed thanks to new access to the grass.

I am really glad I tried this out. Even though the back yard still has a ton of pine straw, I think I’m going to give this another shot (for the back) this weekend and do it again next year. If I can’t get rid of it all, no real loss; I just have to clear room for a burn pile. Plus, this also seems like a good way to possibly get rid of the random bamboo sprouts that are still trying to creep over from my neighbor’s yard (maybe again, what I see as a problem is actually something wants to find?).

And the best part? While my yard was being cleared, I had the opportunity to do some more work on the stairs inside and put up the Christmas tree. I’m so close to finishing the stairs, and I’m getting super excited about showing you the finished results.

Only to finish, I have to take another trip to the home improvement store – and Ikea. So stay tuned!