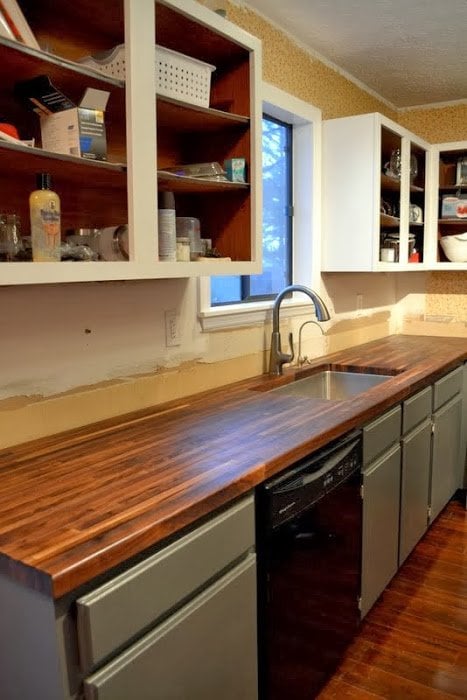 After repainting my kitchen cabinets, I had to re-hang the doors. In this installment of Dueling DIY, I show you a nifty trick for how I did it!

It’s Wednesday, which means it’s time for another Dueling DIY  update! In case you missed it, the concept is pretty simple:  another blogger and I go head to head each week… which basically keeps me in line and on task. The smack talk is just for the fun of it.

For this particular installment, which I’ve dubbed “Clash of the Kitchens”, I’m squaring off with Carrie from Brick City Love. Who has been working wonders on her kitchen thus far. The brick wall alone put Carrie at an early lead. Unfortunately though, Carrie had a bit of a setback last week when the row home next to hers caught fire. Lots of damage:  soot, grit, debris… everywhere. I didn’t know until she posted her update (she kinda had her hands full). Fortunately though, Carrie wasn’t harmed (She was out; yet another example of the importance sharing a pint with friends plays in everyday life. Smart girl!). Her home, while messy and damaged from the fire department needing to check behind walls & ensure the fire was contained, was spared from the blaze. And her pups were safely away.

… so … I guess I’ll just keep going? Ha. Carrie clearly has some more pressing issues to attend to (damaged roof, front door, bathroom ceiling, etc. trumps whatever this blog thing is), but in the meantime, I still want to honor the concept and keep sharing. After all, this isn’t just about Carrie and I… we’ve got a few other readers who are redoing their kitchens and have been linking each week, so I want to keep the motivation going. And who knows? Maybe Carrie’s sooty debris becomes her radioactive spider, and she kicks my ass despite having a hole in her roof. And then I’ll gladly buy her a round at the pub.

And now, onto my kitchen update (I’m going to apologize ahead of time with a spoiler:  everything is dusty and dirty. Shocking how fast it accumulates when you have just enough time to choose between “clean kitchen floor” and “do laundry so I have clean underwear”)…

I’m excited that this week, invisible progress turned into the kind of progress that I can actually photograph. To begin with, the last two coats of white on the uppers became a reality: 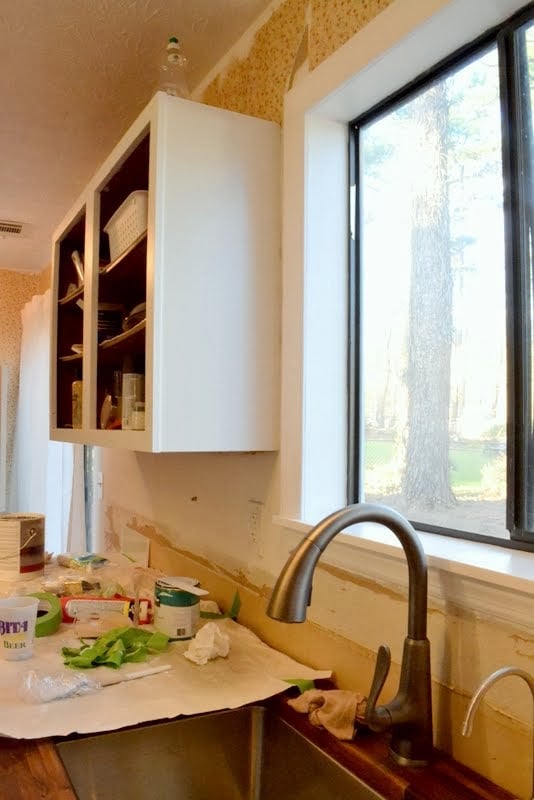 For those wondering, I’m using Benjamin Moore’s Advance paint – uppers are Decorator’s White, and lowers are the same paint brand but color matched to Martha Stewart’s Seal. I love the crispness of the white (no hints whatsoever of yellow, but no visible bluish tones… color balance seems to plague this house and my photography ineptitude doesn’t help matters either). 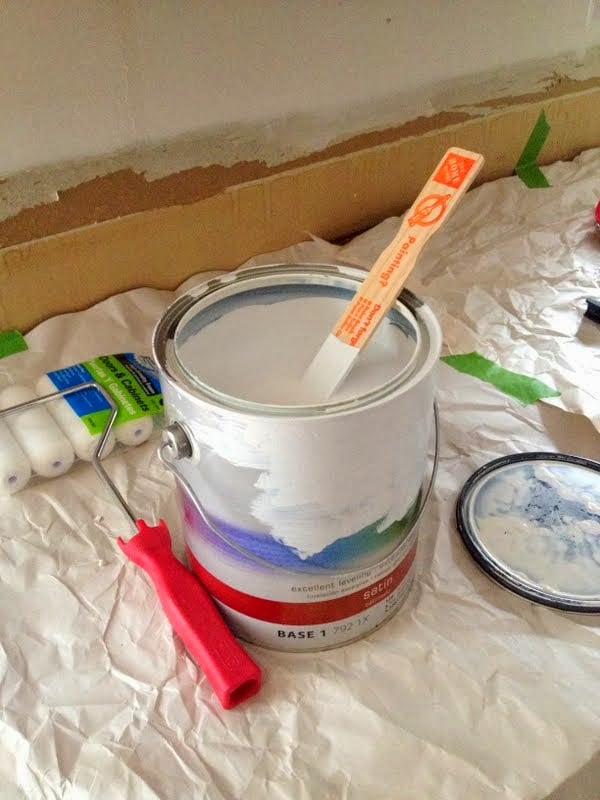 The big task though was installing new cabinet hinges on all of the finished lower doors. A little tip? Keep the old ones, at LEAST for making sure you’re buying the new ones that most closely match! This helped and hurt me at the same time: 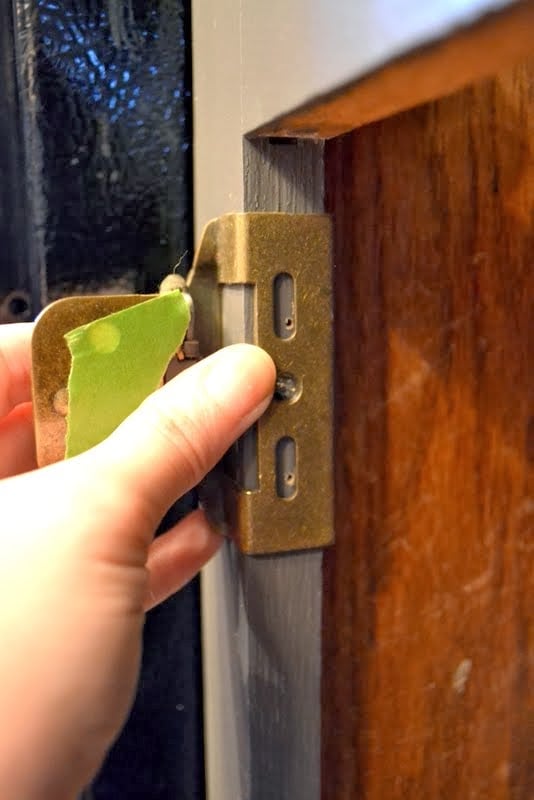 How to Re-Hang Cabinet Doors When You’re Working Solo — A Neat Trick!

Hanging cabinet doors on old cabinets with no assistance is not exactly the easiest task. I found myself needing at least one extra hand at each step (one to hold the door steady, one to press the hinges into place to keep the holes lined up, and one to drill… don’t get me started on the contortion required for also photographing the process). So, I had to employ a little ingenuity to get the job done: 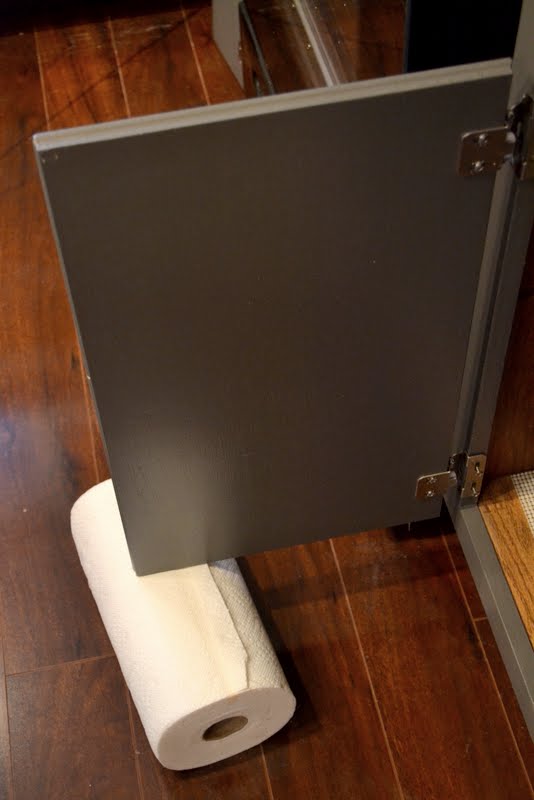 The paper towel roll was just a smidge too high for the cabinet (turning too low with no assistance into too high with the roll), so I squished it a little to give me just the right height. Another Goldilocks moment (I swear, with as often as they happen, I should rename it from the Ugg-Duck to The Goldilocks House; the name even fits the cottage-y exterior better // UPDATE — I did start calling it this)!

How to Level Old Cabinet Doors — Start by Removing the Drawers

I had to take each drawer out to make room for the little level I was using (why are the cheapies always the ones that hang around the longest? I bought this pink one as part of a (clearly gendered marketing) starter kit from Walmart before I moved in — which I now feel silly for buying — and it’s stuck with me for 4+ years!). 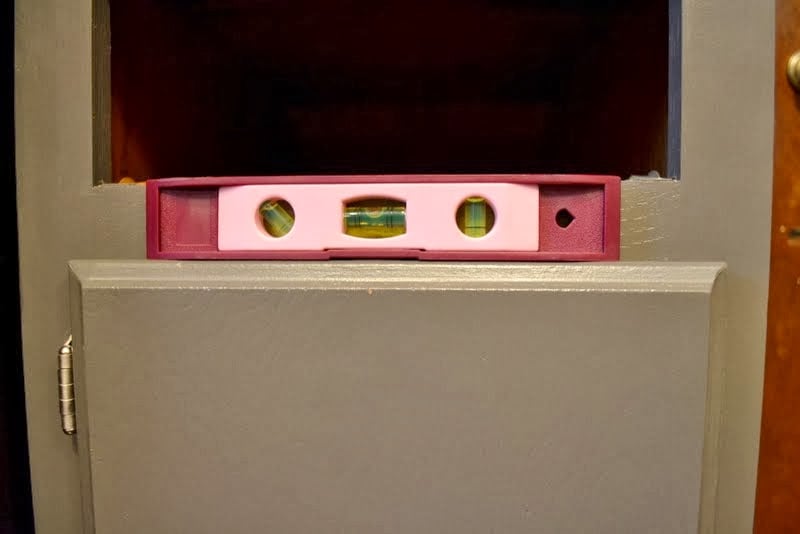 As you might be able to tell in the (blurry) photos, some of the paint chipped while moving things around (I, clumsy as can be, wound up letting them clunk together because my hands were too tied up to catch ’em). Guess they’ll need a touch-up soon. 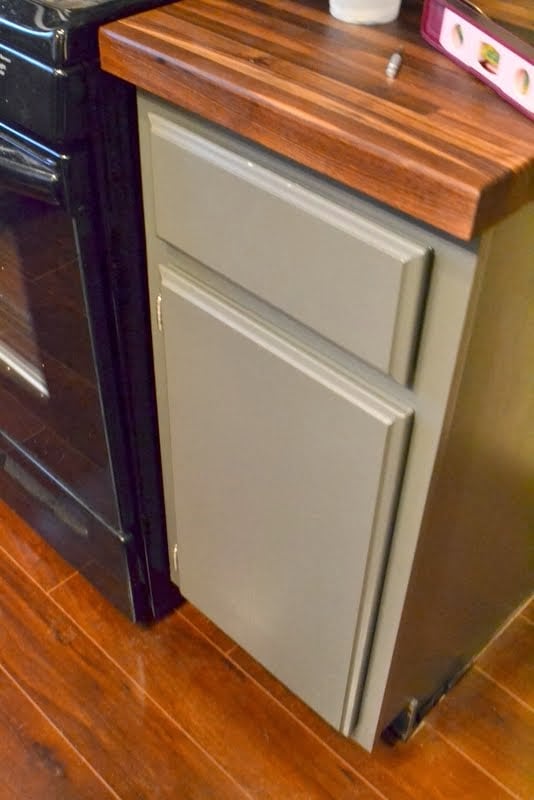 (For what its worth, I held onto a door from the cabinet painting kit experiment I did a few years ago, and there wasn’t a chip on it… so I would still easily recommend that kit for a quick and chip-free option, they just didn’t have the color options I wanted for the kitchen.)

The whole process went a lot smoother than I first feared (which is why I procrastinated on it for so long); I thought I’d screw it up royally and have wonky, uneven doors everywhere. Which would make me throw tools and blurt obscenities all afternoon (or worse, quit). There was one door that flustered me for a bit, but then I realized that the door was perfectly level; it was the drawer above it that wasn’t quite straight (after trying to resolve for a few minutes, I’m chalking it up to a problem that’s always been there and will solve another day). 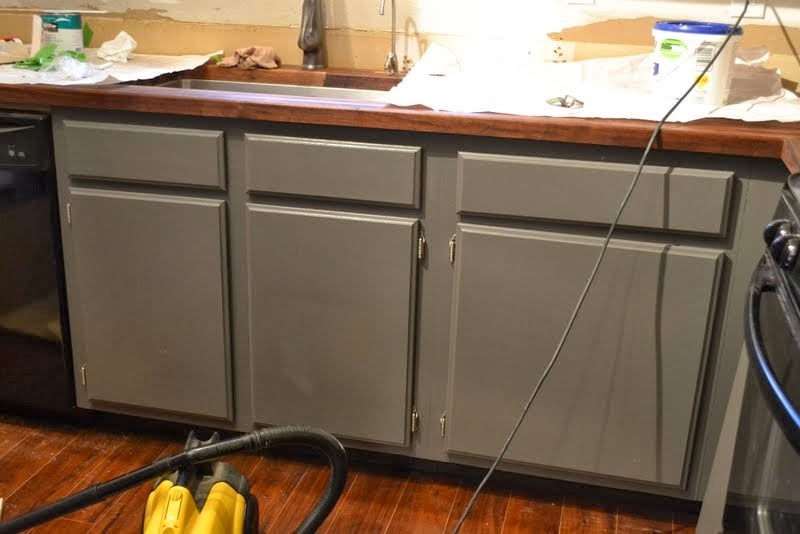 But the best part? I’m starting to reclaim this space as an actual kitchen. That means having space to finish the dining room (soonish). And a living room in which I can enjoy my new TV and not be distracted by the piles of furniture, flatware and dishes that belong elsewhere. 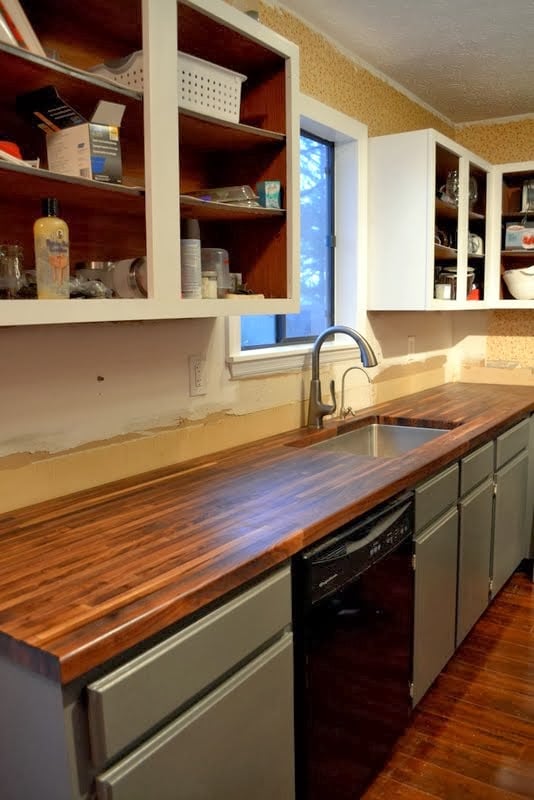 Sure, that means having to wash all of the dusty dishes & do some cleaning, but it’s a small price to pay for my progress!

And now, for the linkup so I can see your kitchen progress too (as usual, let me know if the code is wonky)! Also, do me a favor if you’re going to link up:  please include a link back to this week’s post (mostly so your readers know what you’re referencing if you mention “Dueling DIY” and can then find the other links of those participating). Have a good one! 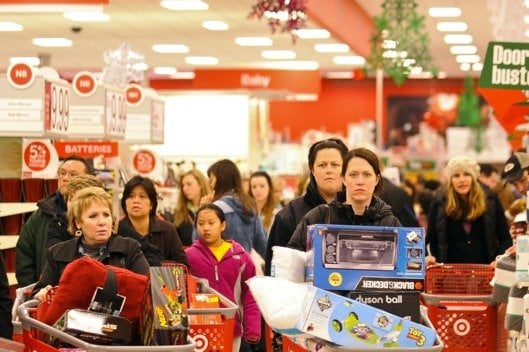 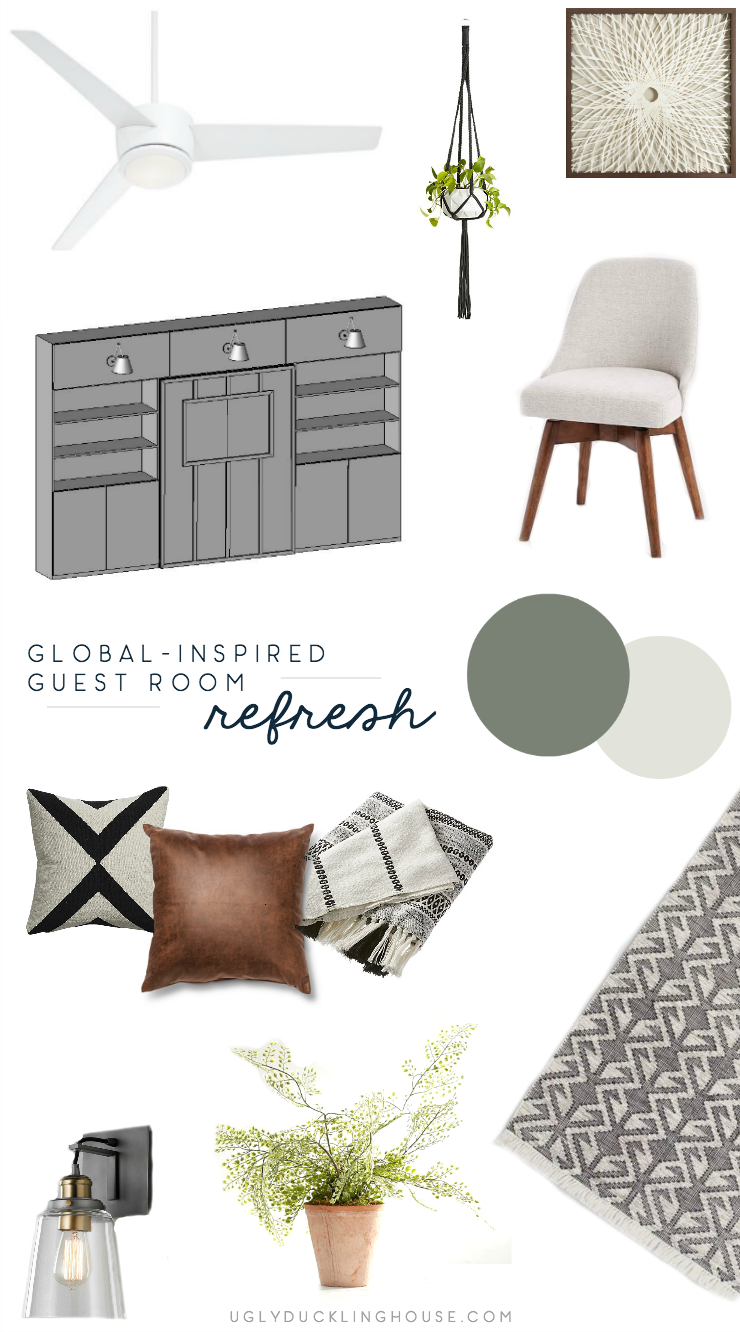 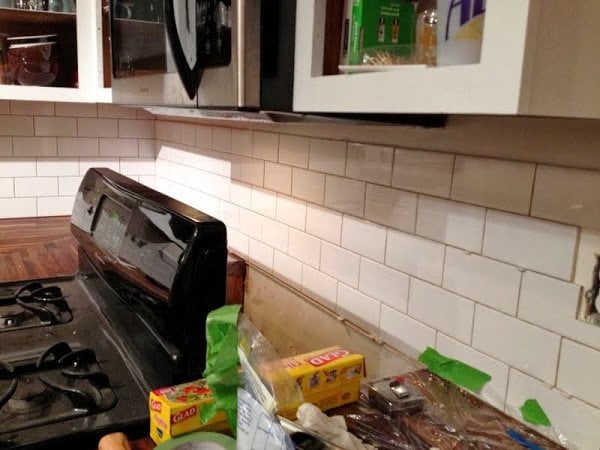 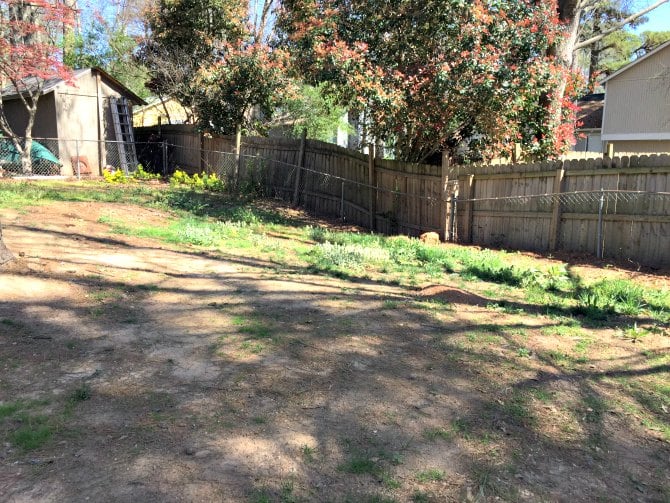 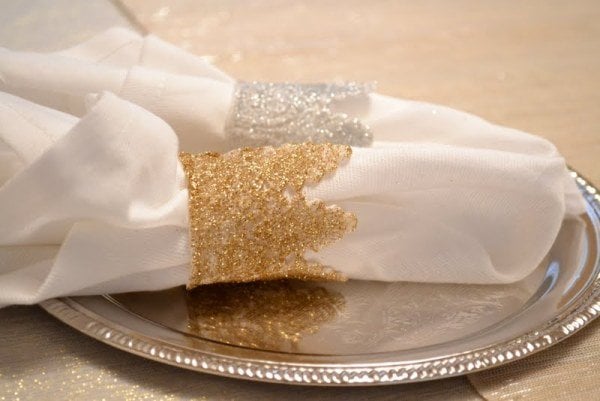 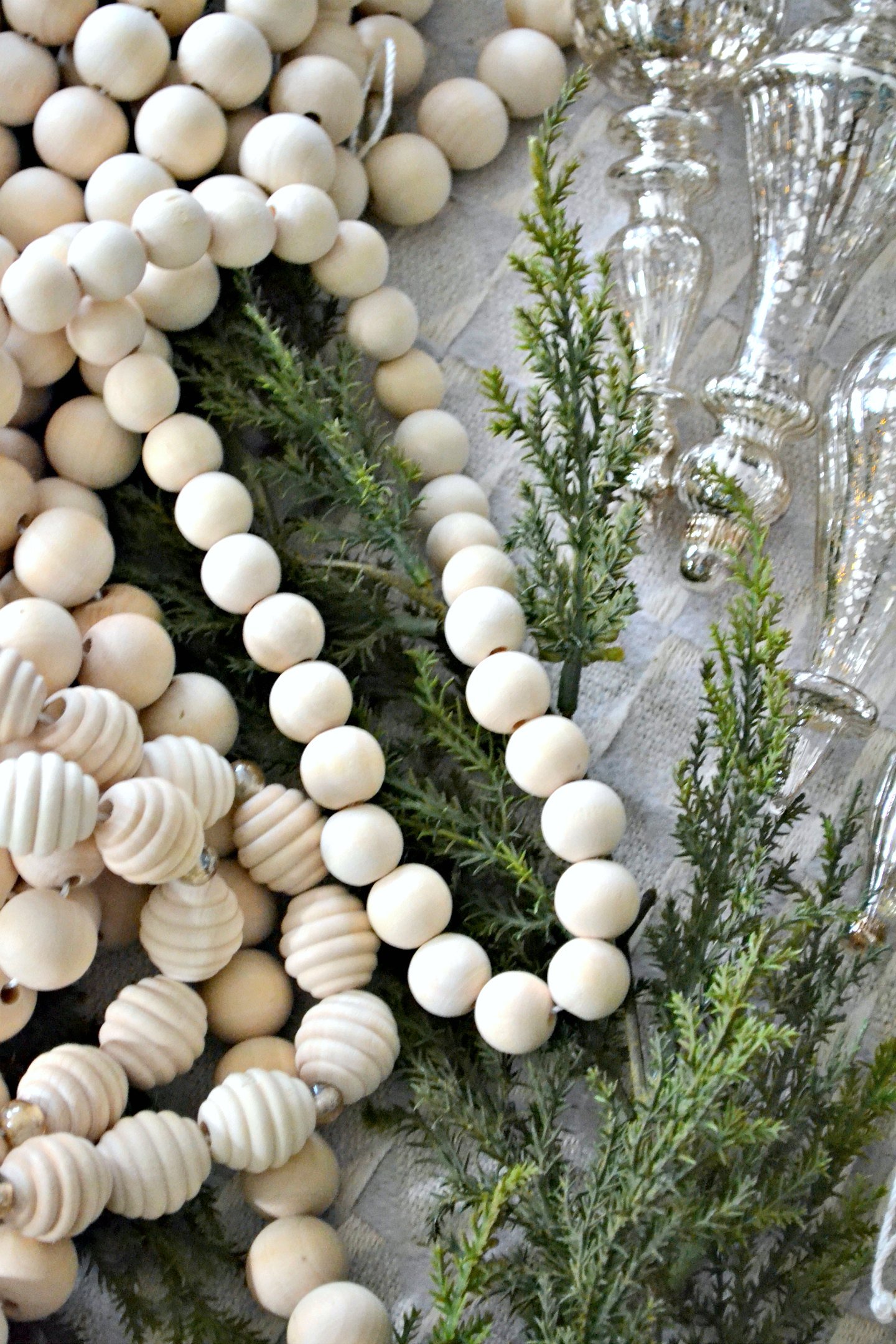