Pin
Share
Tweet
Yum
Baseboards may not be the most expensive thing to buy in the molding department, but if you’re doing a renovation and are able to save the pieces you remove from the wall intact, your savings can really add up. Here are just a few of my tips for salvaging old baseboards:

*note: the steps in this section were done while I was in class (which is nicer than coming home after class and still having to do it – thanks Dad!), so I don’t have pictures to show. The next time I have to remove them, I’ll take these and update the post.

2. Use a flat prybar to wedge between the baseboard and wall. I own this set and recommend it.

(affiliate link)  Use the large, flat one. Try to be gentle, but pry the baseboard away. If you can simply remove the baseboard, nails and all, do it. Pretty Handy Girl has an excellent visual example if you need one of this (since I don’t have the pictures yet!).

If you can’t pry the board off cleanly without splintering the board, try to pry just enough off the wall, then hit the baseboard back onto the wall with a swift blow of a hammer (but not where the nails lie; you’ll want space along the wall to create the effect). What often happens is the nail will stay more firmly in place, but the hammer’s connection to unsupported (no nail) spots on the board will further separate the nails from the wood. Often this causes the nail to jut out from the baseboard at this point, so you can use a claw hammer to completely remove the nails and take the baseboard off.

As you can see from the picture below, the original nail holes were never covered when the baseboard was installed, so nail removal was a snap. If you pried the baseboard off the wall complete with nails poking out of the board, try the following technique: 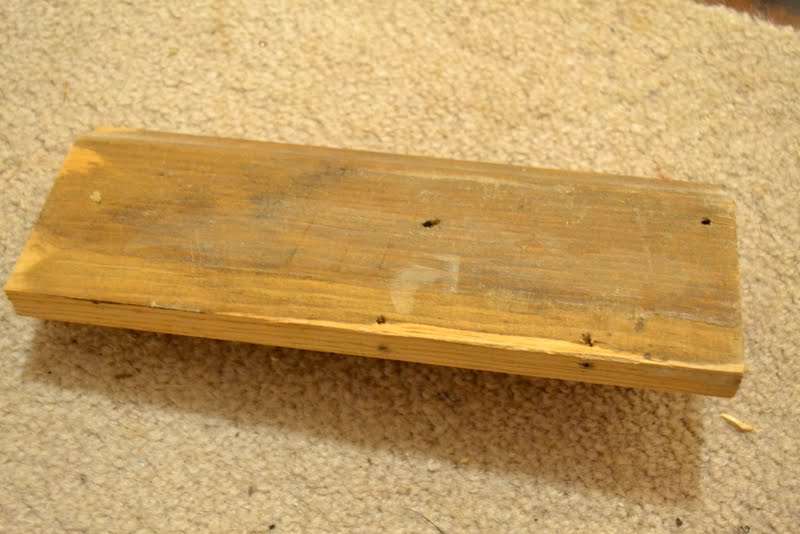 1. Flip the board over to expose the nails. I found that using a soft surface (like the carpet just before my upstairs hallway – excuse the debris from working in the guest bath!) worked easier since it was more of a cushion. 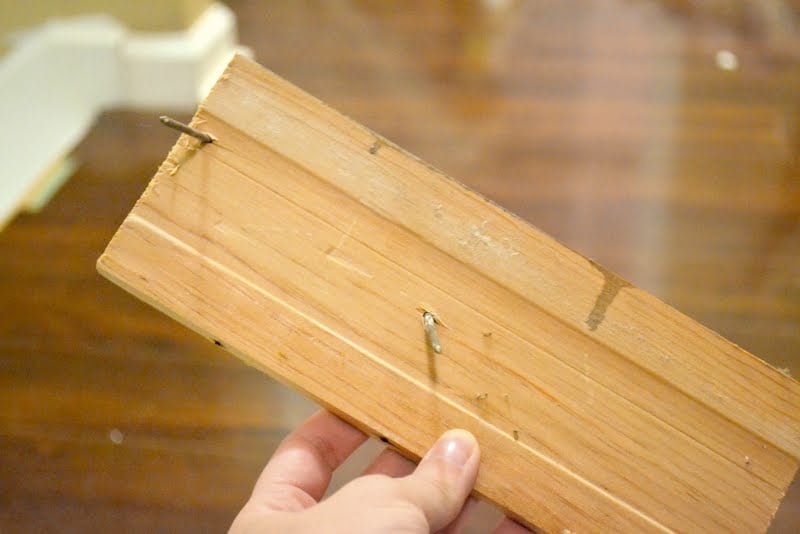 2. Hit the nail points with a hammer, causing the nails to shift back through the front of the board. 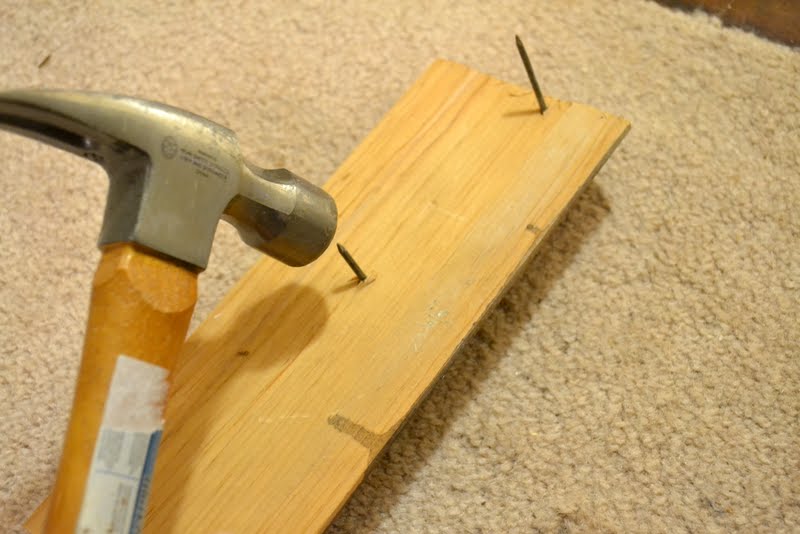 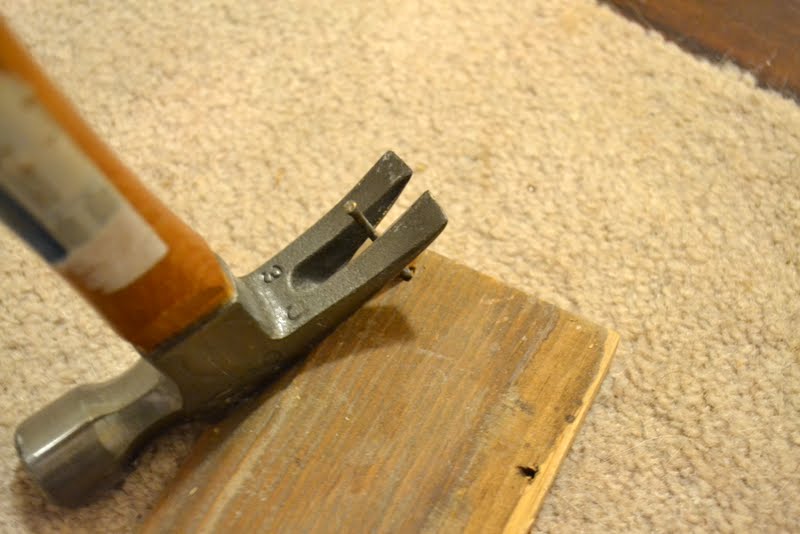 Yet another removal method

In the case of even older boards (say, restoring old houses), you can actually use the claw hammer or a pair of pliers to grip the nail on the back of the board and pull it all the way through the baseboard instead of pushing it back through the front side. If you’re at all concerned about the nail head causing more damage going back out the front of the baseboard (which sometimes happens when the nail hole has been covered over with wood putty and painted), try this method instead!

I highly recommend priming and applying at least the first coat of paint to the baseboards when it is still off the wall. It is simply faster and you don’t have to tape anything off. The pic below is after two coats. Don’t they look a million times better now? 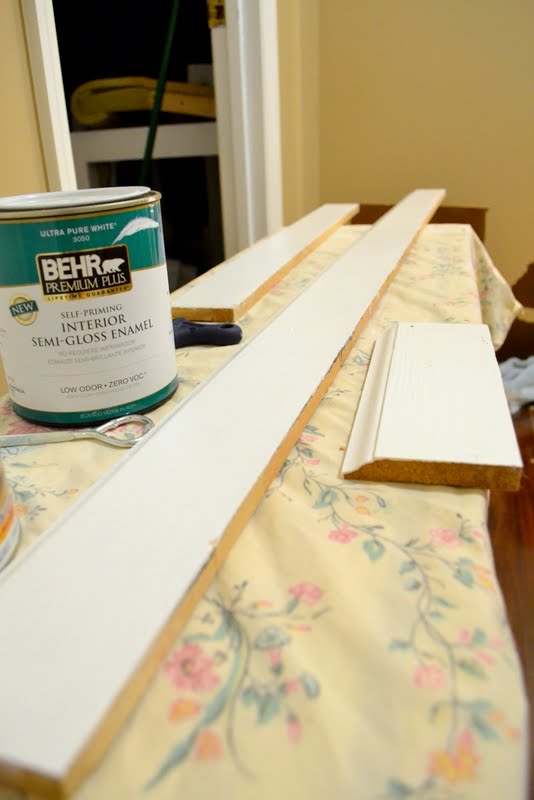 The best part about re-using the baseboards is that your cuts are already made (unless you make changes to the width of something that was installed).

1. (Optional – and useful where there are areas that can’t be nailed in place, like around my tub). Apply construction adhesive to the back of the baseboard in an s-curve fashion. Using circular motions will cause air bubbles.

2. The old nail holes might be too weak to use again, so I would recommend finding a new spot to drive a new nail (especially if you’re painting it anyway). Just a couple nails every eight inches or so (if your molding is like mine, top and bottom in one spot) should do it. If you’re working around hard surfaces like laminate or tile, be sure not to angle the nail’s entry so that it doesn’t bounce off the surface (and fly at your face; I’ve seen it happen). Regardless, be sure you use eye protection if you’re using a nail gun.

3. If the baseboards do not fit (I had one spot where my new vanity was wider than the old, so installing the old baseboard was about an inch too long), use an oscillating tool or miter saw to cut off the excess. Again, this is much easier and cheaper than starting fresh, even if there are a few adjustments to make.

4. When everything is back in place, caulk the top (where the board meets the wall) to keep things clean (no one likes crevices, even tiny ones, where dust can settle) and caulk any seams or nail holes, then touch up with paint. 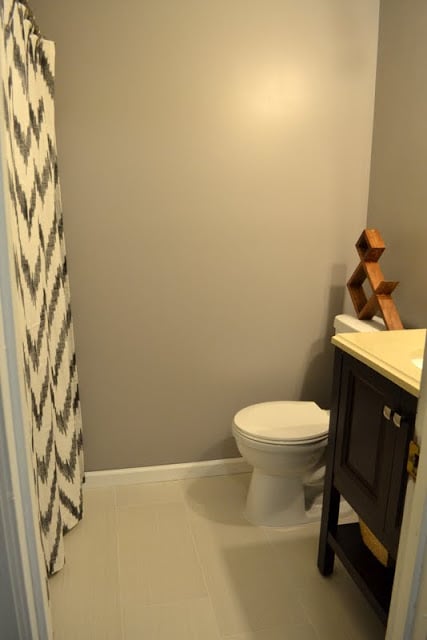 Prest-o, change-o, cheap-o. Use the dollars you saved to buy yourself another tool (or whatever else you like to spend your money on – that’s just my choice).