Overseeding is known to most landscape professionals, but many homeowners aren’t familiar with this technique for improving the growth of a lush, healthy lawn.

This weekend, I found a dead goose beside my air conditioner. And that was — thankfully — the worst that things got, since I actually managed to get quite a lot accomplished in the yard (albeit, holding my breath at times… ick). While I’ll have to wait for one more truckload before I can share the amazing deal I got on gravel for the new fire pit (it’s looking so good!!!), I wanted to bring up a topic I haven’t really gone into much depth on before: overseeding a lawn — the how, the when, and the why.

The concept of overseeding is pretty much there in the name: it’s simply the technique of spreading out new grass seed over an existing lawn. It took me a while to learn about the concept when I first bought my house, so I assume that it may be a first to some of you guys, too (or at the very least, worth going into a little more detail on). When done right, overseeding helps to fill in bare areas, helps prevent weeds from taking over, and keeps lawns green when the temperatures change and some grass varieties lie dormant (summer grasses vs winter, for example). Think of it almost like getting bangs — the first change is the most dramatic, but regular maintenance is also pretty darn important (although I’m pretty sure lawn care has far fewer selfies and regret involved).

Those of you who have been around the blog for the last year have seen me do quite a lot to whip the back yard into shape, including grading, planting new grass, creating a temporary fire pit to help get rid of old tree stumps, and more.

The planting of new grass seed this past spring was really successful thanks in large part to adding a sprinkler system, but I laid down both fescue (a long-term, drought-tolerant seed known for growing well in Georgia) and rye (a short-term seed that would eventually die off but help to prevent soil erosion from undoing all of my previous hard work).

Now that we’re approaching fall, I took the recent cooling of temps to start thinking about the same long-term goals I had in the spring. Some of the grass died off as expected, and given that I had such aggressive weeds in the yard prior, I knew that my seeding efforts would be better served as more of a marathon than a sprint. So, since the online expert lawncare gods seem to all agree that overseeding is a good idea in the fall, I thought I’d give it another go and see if things look even better when spring rolls around again. 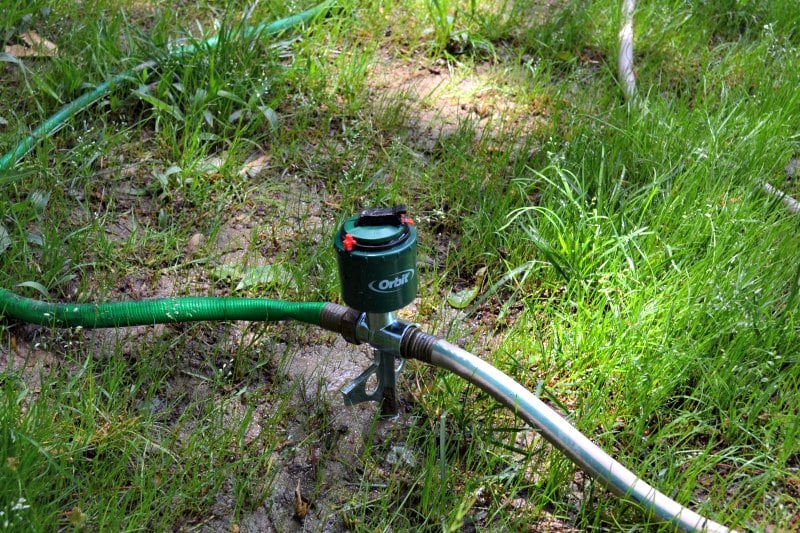 In truth, my timing might be slightly a bit early — it’s supposedly better to do in September/October in parts of Georgia, but since I’m traveling and have other goals in mind for this fall, I figured that as long as I got it done when the temperatures seem to be in the right range, then I’m better off than my inevitable procrastination would likely lead to (as in, no seeding at all). My overall plan is to first re-seed with my year-round grass (fescue) and then have a later follow-up seeding of some winter rye (just to keep color and again help with weeds and erosion). I’m not exactly following every step recommended by lawn experts, but I’m doing a few of the basics that are already working for me.

I wish it were as simple as buying a bag of seed and throwing it into a spreader, and for a long time, that’s all I ever tried to do… which clearly has not worked, since I’m still trying to grow! But one of the big perks to having that temporary fire pit in my yard over the last year or so has turned a lot of burned yard debris, ash, rainwater, and vegetation into a sort of dark, rich compost (and by accident!). I was really happy when I discovered this (and all of the lively activity from worms, bugs, etc.), as it meant I already had an awesome source for healthy soil to spread around the yard in preparation for my new seed. 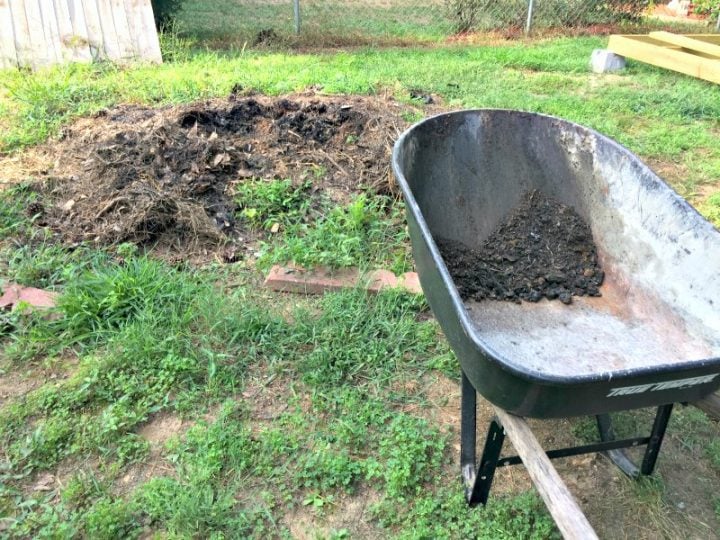 In addition, I spent a little time raking up “thatch” (a general term for the little bits of un-decomposed yard debris that comes from mowing, twigs, leaves, etc. and gets stuck in the grass above its roots). This basically primed the yard for the next step. 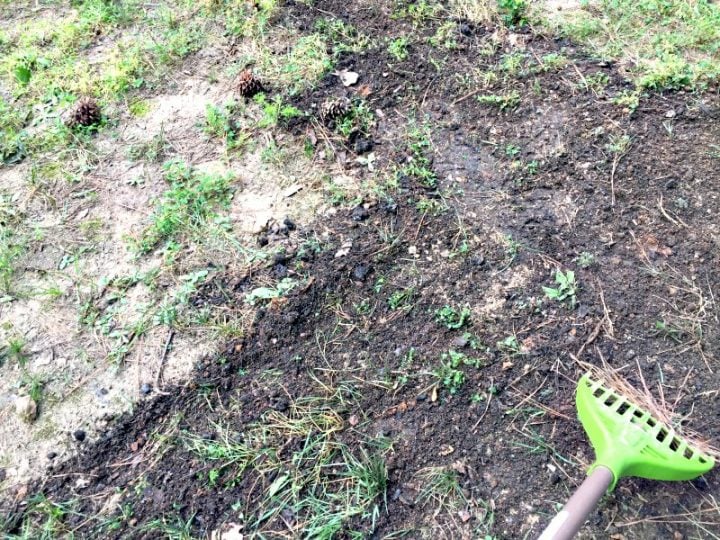 I know that eventually, I’ll probably downgrade my expensive grass seed choices to the kind of stuff that doesn’t have fertilizer and all of that already combined with the seed itself, but for now, I still gravitate toward the stuff that can basically grow on a concrete block if you asked it to (there are a number of different brands that have this type of seed, just FYI). On the package of the seed I purchased, it was recommended to spread three separate times, so that’s exactly what I did. After spreading out all the seed, I then gave it another quick raking to sort of mix the soil and seeds (another recommendation on the seed packaging). 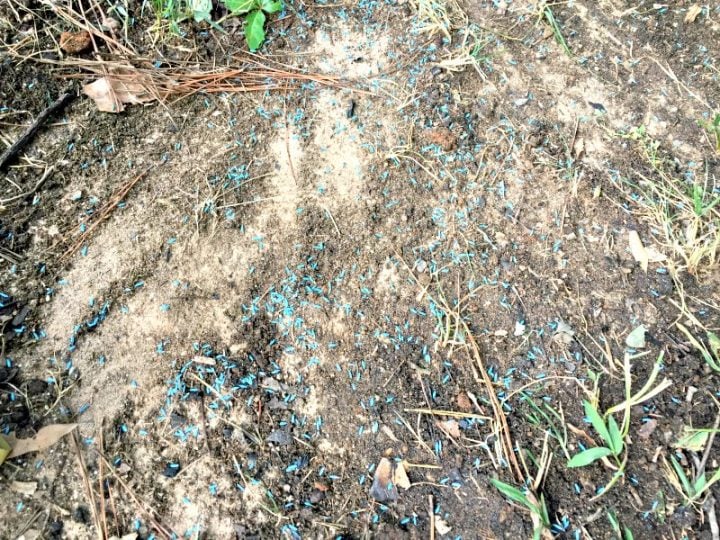 For the first time, I also tried shaking out a thin layer of straw over the top of the new seed. This is recommended as a way to both keep the soil from evaporating moisture too quickly (allowing the warm, wet soil to germinate the seeds), keeps the loose soil/seed from blowing or washing away, and helps shield it from birds looking to make a meal of the seeds before they’ve had a chance to root. 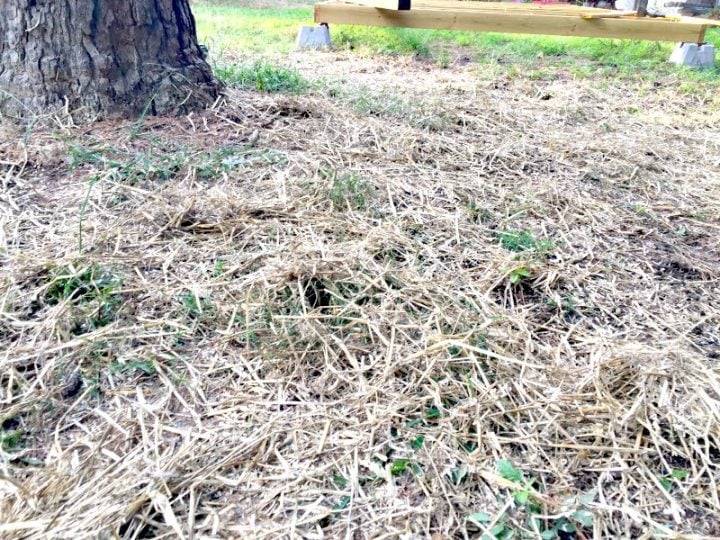 The mower will be temporarily decommissioned while I wait for the seed to start growing in, but the good news there is that it’s going to give me a little time to give my lawn tools some desperately-needed TLC. For the last year and a half or so, I relied on a hired neighborhood dude to maintain my lawn, and that worked out really well — until it didn’t (the lawn was mowed regularly and I thankfully didn’t have to do a task I loathe myself or deal with fixing my yard tools, but there were a number of lawn mishaps such as plants getting smothered and realizing a tool I really liked got accidentally buried in yard debris and subsequently added to the burn pile, etc.). After putting in all of this renewed effort to focus on fully upgrading my lawn care, I realized that my hands-off approach just wasn’t cutting it anymore (ha! unintended pun… get it?). And once I turned back to using my own tools, I realized that leaving things unused in my garage for that long might need a little care of its own. 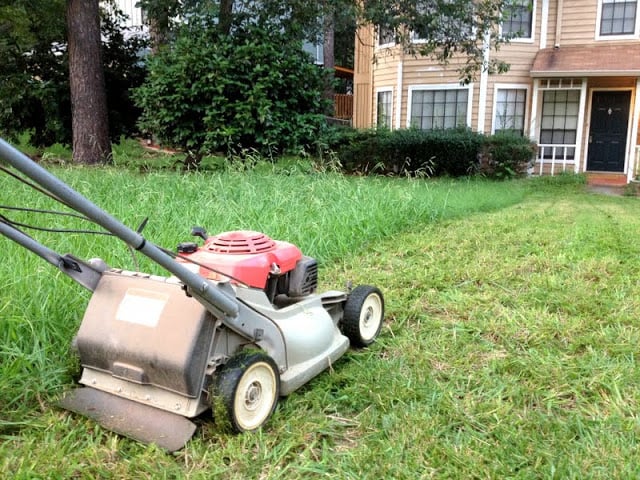 I’ll still have a helping hand (or two) though. One is in the form of a handsome bearded guy, who at least has enough genuine interest in this kind of stuff to share his expertise for my benefit (like figuring out what was wrong with my mower when it broke earlier this spring), and another is a new resource for DIY repair guides through a new fall partnership with Sears PartsDirect. Despite all of the home repair guides I’ve written over the years, anything mechanical has still been pretty intimidating to me, so partnering with them will be a no-brainer since they already have DIY guides on things like mower repair, sharpening mower blades, etc. I have a few other items that have broken down over time in this house too, so I’m sure that I’m going to have a nice long list on what to fix (and what parts I need) from them next!

So, that’s where I’m at so far. In a few weeks, I’ll also lay down some lawn starter fertilizer and make a final call on whether to lay down some winter rye (I’m heavily leaning toward yes, but we’ll see). I can already hear the sprinklers going off too (I have them go off at night — it is way too late/early in the morning right now!), but I think if I continue with overseeding to fill in patchy areas, I’ll have a lush, healthy lawn in no time. Got any of your own overseeding or lawn care tips to share?