Pin
Share
Tweet
Yum
(Some of you guys like hearing about behind-the-scenes blogging stuff; some of you don’t. This is basically a post about how awkward I am around other bloggers who I’m a big fan of. So feel free to skip it if you aren’t one of those folks. A conventional DIY update will appear tomorrow. Enjoy!)I’ve mentioned this before, but I don’t really have many books about design. I snagged a copy of The Handbuilt Home at a signing with Ana White a few months back, and when I found out that John & Sherry of Young House Love were having a stop on their book tour in Atlanta, I had to check it out. Their amazing blog and personalities helped inspire me to create my own (although the majority of it was a nudging from my friend Lauren, who insisted it was a better alternative to forgetting which friends I’d told my house stories to already). I’ve met them once before, last year, at the Haven conference in Atlanta and was stunned when Sherry told me she’d seen my blog before. I was incredibly awkward. But I snagged a pic and that was that. Happy fan. 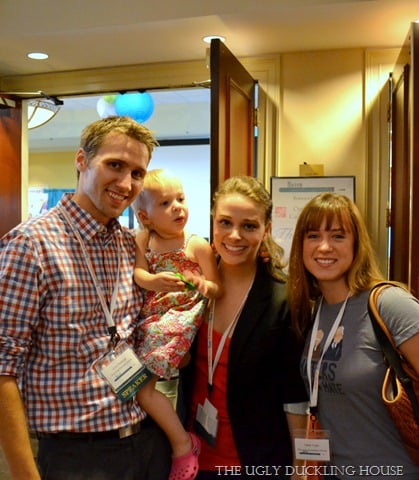 So I thought I might redeem myself at their stop in Atlanta for their book signing last week (for those who haven’t picked it up yet, it’s called – wait for it – Young House Love: 243 Ways to Paint, Craft, Update & Show Your Home Some Love). The signing took place in the Midtown area just a few lights away from Ikea (where I was the night before) at Flor. I first learned about Flor in 2011 when I was a part of the Solar Decathlon home competition in Washington, D.C. Flor makes carpet tiles that allow for custom rugs, runners and whatnot. Their concept is innovative, though I wonder how they really hold up over time.

John & Sherry have a habit of bringing the weather with them for each stop in their tour. For Atlanta, that meant cold rain and wind. It. Was. Freezing. And I know – we Atlantans can’t tough it out in cold temps. But once you get used to warm weather, a dip in the thermometer makes you an unprepared wuss. It just happens, even for girls like me who were born in Wisconsin. 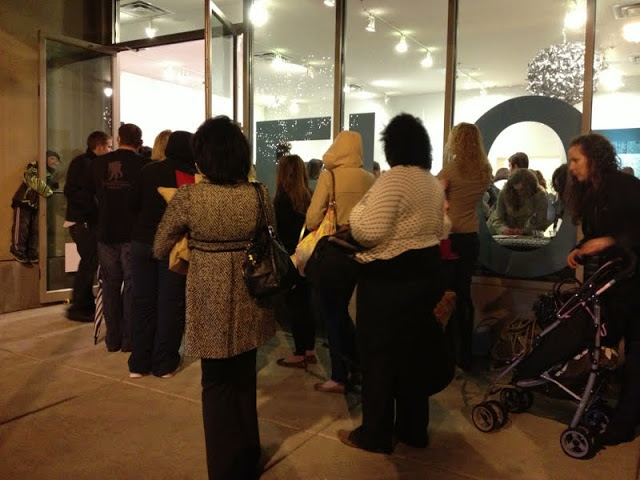 The line snaked around the building and into another empty office building next door. After a full day of work and fighting through traffic, I was lucky to get there just before the signing began. I briefly wondered how I was going to kill an hour standing around with nothing else to do. Luckily I’d thought ahead and asked for a line buddy the day before on my blog post, so I was very grateful to have one of my readers, Ellen, take turns with me for bathroom and yogurt breaks (there was a fro-yo shop next door and I hadn’t eaten all day – so thank  you, SO much Ellen, for helping me out!). We spent most of the time cracking jokes about accounting (she’s a professor at a local university) and home projects gone wonky. Because that’s what the cool kids who stand in line are doing these days. Eventually, we got up to the front of the building and the Flor staff had treats to give us a sugar boost. Yum. And they were good sports about me taking pictures. 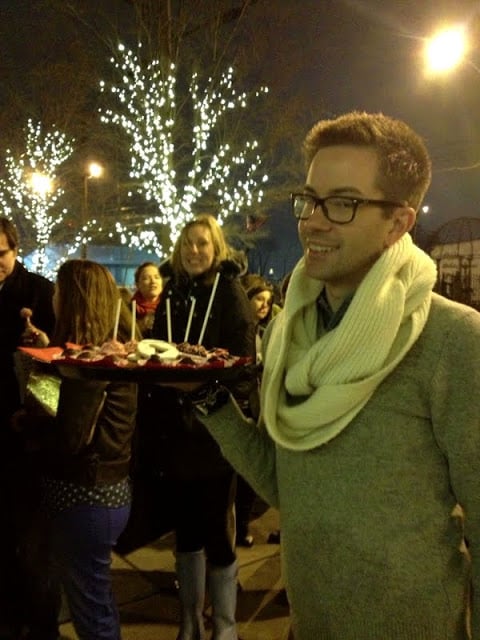 Once inside, they really hit it out of the park for me. They had booze. Hey – I didn’t know that this was a party! I was just excited to be warming up my icicle toes, but I appreciated that they thought things out (cold people can be very forgiving if you give them free beer and wine). I waited for Ellen to walk up to the signing table to get her pictures before stepping up to get my book signed, said hello…

…and was a total dork again. I was exhausted (seems to be a permanent state of being lately) and completely drew a blank. Sherry, John and I talked about, of all things… my wrinkled shirt. Sherry was quick to point out though that it was “grellow” (the color they painted their kitchen). I was still focused on the fact that I was late for work that morning and hadn’t ironed it. My shirt still had the creases from being folded and shipped to my house (straight out of the package, #represent). There was no blogger-to-blogger talk – for some reason, it just felt really odd to self-promote in that situation (which is what I felt it would sound like if I just started talking about my blog), and I was there as a fan. So I just said hello, made a few quirky comments about my wrinkled shirt, and one of the Flor staff snapped a picture with my phone. The downside was that the picture came out really fuzzy and my hair was out-of-control-windblown, but I suppose it pretty much captured the awkwardness of the moment. And what’s with my tiny head? 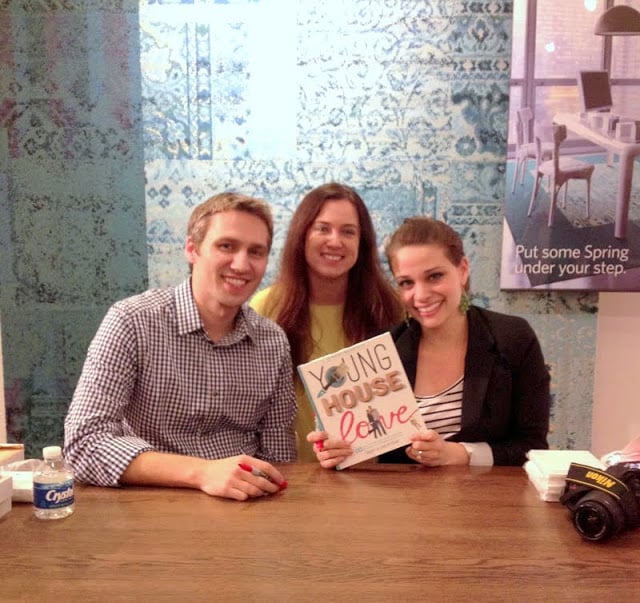 I got back in line… mostly because the next part of the line was heading toward the bar. But it was also because Katie Bower also made an appearance in another part of the room. And not only that, but Jeremy and brand new Weston were there too. Surprise! 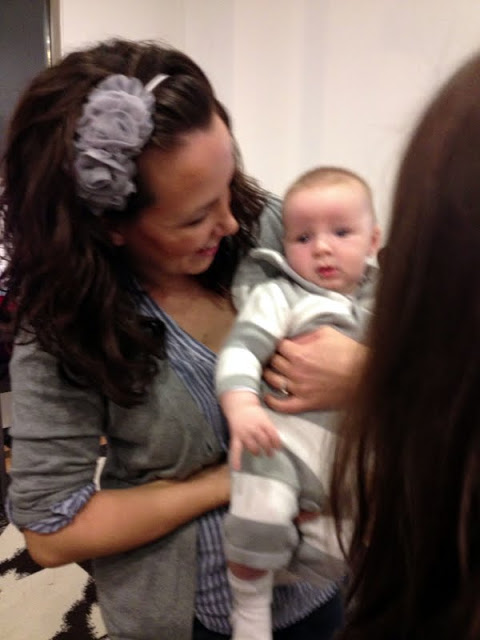 Okay, so considering I already Instagrammed and Facebooked about it, it’s not that much of a surprise for many of you. But I didn’t expect any of them to be there, and I was really excited. After all, I had hosted a Pinterest Challenge with Katie and Sherry, and now I was going to be a total dork in front of both of them in person. Score!

Before the end of the line (before my next awkward encounter), there was a fun little photo booth. I’d had enough wine to be making funny faces at this point (for those keeping count, that’s approximately less than half a glass, so it really could have simply been that my brain was warm again and I was relaxed). So then Ellen and I made funny faces. Her photos came out way better than mine. I just look confused, crazy, and a little hungry. That’s the photo hell trifecta, right there. Oh, and in one of them, I did a duckface. Really. What. the. frass. 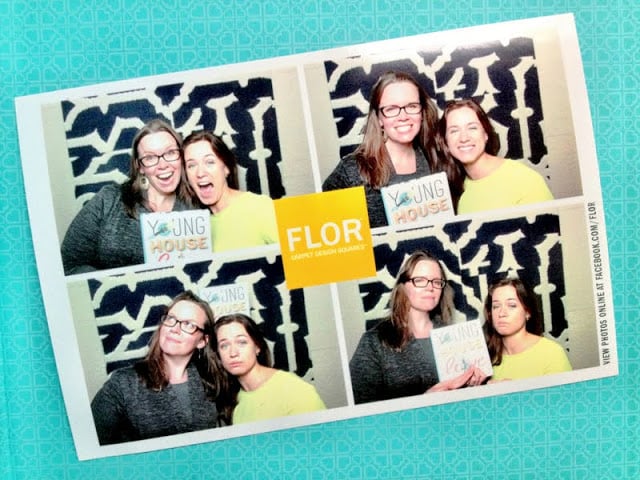 Do you read Katie’s blog? She’s adorable and lives here in Georgia too. Katie had her own feature in the YHL book (which is the section she signed for everyone). Jeremy’s her husband and they’ve just had their second little boy, Weston. This kid is completely adorable. He wasn’t very interested in taking a photo with me though. 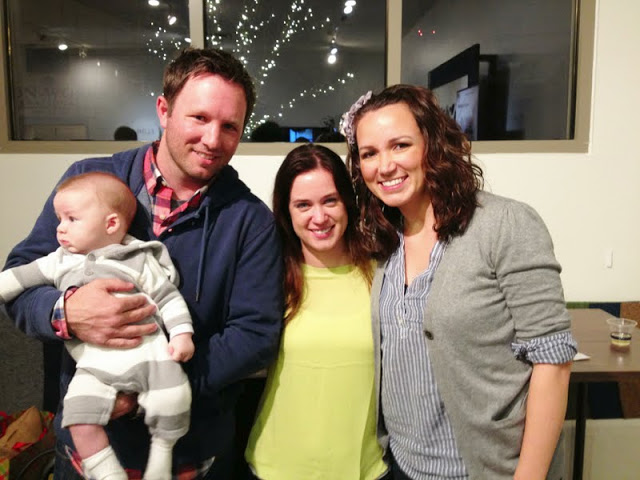 I finally fessed up to being a blogger when chatting with Katie. That’s the weird part about it I guess. You know other blogs, they might know you, and it’s all just a little weird until until you start piecing it together. Oh, right! I know your face! Plus, let’s face it – we’re talking big fish here. I’m in the world of being stunned to have even been nominated for a Homie – these folks made it through all the rounds, won, and oh yeah – are getting book deals (very much well-deserved, too!). My blog is still pretty small by comparison, and I’m stunned any time I hear someone’s even heard of the UDH. I liked how Katie put it though – that only ten people read her blog. That humble liar. For anyone wondering, Katie is just as sweet and funny as you read online. And she has no idea where to put her hands in pictures (she did a cheerleader pose in one of them for another fan).

After all was said and done, I headed out and said goodbye to my new line buddies. It’s always nice to meet local DIY enthusiasts, and I met another Katie too (she’s got a new blog called deranchification and I’ve already learned about a new tool as of this morning – cracked me up when she explained that all the blog names are taken). Just before I walked away from the remaining line, someone actually recognized my face – which was pretty surprising to me. It was another reader, Rhiannon, who frequently follows via my Facebook page. She was so very sweet! Of course, back home, it was back to the old routine (at 10pm, this is just how things are at my house).

Which brings me to my next Dueling DIY update tomorrow, so be sure to see how things are going. Kit’s been working on her donkey barn this week, so I don’t know how far she’s gotten with her stairs. Can’t wait to see everyone’s updates!