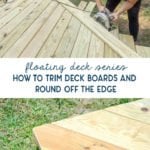 I’m building a DIY floating deck in my back yard! Catch the whole thing, start to finish, right here. In this chapter, I’m covering how I trimmed all the deck board ends and rounded off the cut.

Back today with more details on my big deck project! All week, I’ve been working on some final touches before the furniture builds and design begins, and I’m so excited to share those! But first, I’ve got to finish up the deck for you guys and answer a few questions. So I’ve got the next installment and video for you to get all the DIY details. If you missed building the frame or putting the decking on at a diagonal, you can catch up and come back!

How to Trim Deck Board Ends

I waited a few days after finishing the deck to get my confidence up. With cuts like these, you really only get one shot. While that kind of thinking isn’t necessarily productive (in fact, it leads me to procrastinate, believing I’m not ready yet), prep work on this step is key and will leave you feeling like you’re ready!

While I could have cut the deck flush with the supports, I knew I wanted things to overhang by about one inch (still haven’t decided if I’m adding contrasting trim or not underneath, but I wanted the option). I had planned that from the beginning, so the boards on both of the angled ends were overhanging by about that much from the installation. So basically, 2 of the 6 total sides I needed to cut were already finished, so I could use these as starting points for my cuts.

How to Set Your Cut Line and Circular Saw

Once I got started, it turned out a lot easier than I anticipated! I measured out my line, end to end, and snapped the chalk line on it so I could see where to cut.

Step 2: Screw down a straight board

Given that a lot of my supplies had been in the elements (a very rainy summer!) during installation, I had to carefully pick out the straightest board I had.

With the board picked out, I measured the blade offset and screwed the board down so it wouldn’t flex (both ends and the middle). You could use clamps if you’re able, but with this deck being so close to the ground, I felt much more comfortable making a few screw holes and patching them up later.

Take a deep breath, and go for it! I was very nervous I would screw up, but it went great!

I continued to the next side of the deck, and the next, until finally, I was on the last one. I waited until the end to do the one closest to the house since there isn’t an option for adding trim to that side (it butts right up against the edging stones of the hydrangea garden), so that edge was a little shallower to the base. But after a few starts and stops (and finally trimming back the corner hydrangea so I could see where I was cutting), it all worked out.

How to Round Off the Deck Board Edges After Trimming

Once I trimmed off the overhanging deck boards, I realized: that cut edge is a little sharp! Not only that, but it didn’t quite match up to the rounded sides of the rest of the deck boards.

Why I rounded the edge

I hadn’t actually planned on how to deal with it ahead of time. I considered I might do more harm than good by actually trying to fix a problem virtually no one but me would notice (please tell me I’m not the only one who thinks things like that!?!?). But, I also wondered if it might be safer (both for the dogs and my bare feet) to round things off from an everyday-use kind of thing. So, I headed into my garage to search for a quick and easy solution.

I could have pulled out my palm router, and I know some of my woodworker pals will laugh that I would choose anything but a router. But just before rummaging through my garage to find it, I ran into my angle grinder. And I noticed that it still had a high-grit flap disk attached from this carving project. So, being the lazy gal I am (plus, there’s the summer HEAT to contend with), I plugged in the angle grinder and went to town on the cut edge around the whole deck.

Imperfect, but it’s just fine by me!

Now, is it as perfectly rounded as it would have been if I’d used my router? Nope. If you’re a perfectionist, and especially if you don’t have recent practice with an angle grinder, the router is the better way to go. I still got a rounded enough edge to be happy, and I got it done faster than taking more time to find the router. If done is better than perfect, this was definitely win-win.

I continued to use the angle grinder on the rest of the outdoor projects requiring a finished edge (such as the deck on the pub shed platform and the pub shed bar, which I’ll share more about at a later date).

Next Steps: Stairs, Staining, and Styling

And that, in a nutshell, is the last of it! My new deck was installed, trimmed down, and ready for action. There were still a few things to finish up, like adding a small step on the narrow lip that leads to the fire pit (done!) and staining (also done!), but for the most part, it’s done. To be honest, I’m not even sure I installed the steps 100% correctly because I kind of winged it (I’ll post about that later if you want me to), but it’s not really that big of a deal since the floating deck is so close to the ground. I doubt they’ll get much use.

Next is decorating and landscaping, which is what I’m in the middle of doing as we speak (in fact, check out my Instagram stories today to see my dilemma in tracking down all the cushions I need for the yet-to-be-built sectional… I’m missing 3 and none of the stores around me have them! It’s problem-solving time unless I can find those last 3!).

And as for the dogs? They LOVE the new deck and are out on it every day. Charlie pretty much poses on it all the time. Follow along the rest of the series below!