Ready for a picture-heavy post? Last week, I took a short trip to Chicago to see a concert and do some sightseeing, as well as visit a couple of people who now live there. I have this little inside joke with friends that I promise to bring Atlanta’s sunny and warm weather with me whenever I travel, and despite the obvious magical thinking in that statement, I actually delivered this time. It didn’t hurt that I saw the city at one of the most spectacular times of the year, but I’m going to go ahead and claim a little credit on this one (because why not?). It was stunning.

Umm… yeah. I’ve visited Chicago many times before, but it’s been about five years since my last trip, so when I got wind of a concert I desperately wanted to see, I called up a friend and asked if I could visit for a few days. But quite frankly, I don’t remember it ever looking this beautiful. And just because traveling (even via a blog post) can be fun, I thought I’d share the highlights with you before we get back to some DIY updates.

I can’t remember which airport I flew into last time, but O’Hare had a pretty cool view to keep me company until I found my friend in baggage claim. It kind of reminds me of some recent light fixtures I’ve seen, but I’m a sucker for just about any decor that’s globe- or twinkly-light-related. 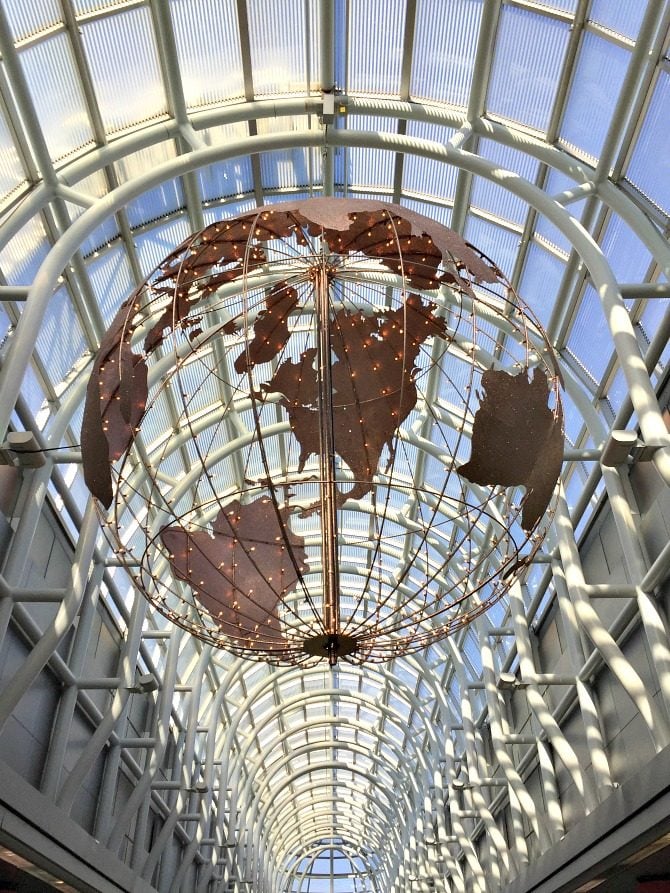 Atlanta isn’t exactly the poster child for public transportation, which is probably why Chicago’s “L” train looked so charming to me as I spotted it around the city. I didn’t get to see it spark at night (which my friend insisted I’d probably witness), though I still liked the contrast of older construction against the more modern backdrop. 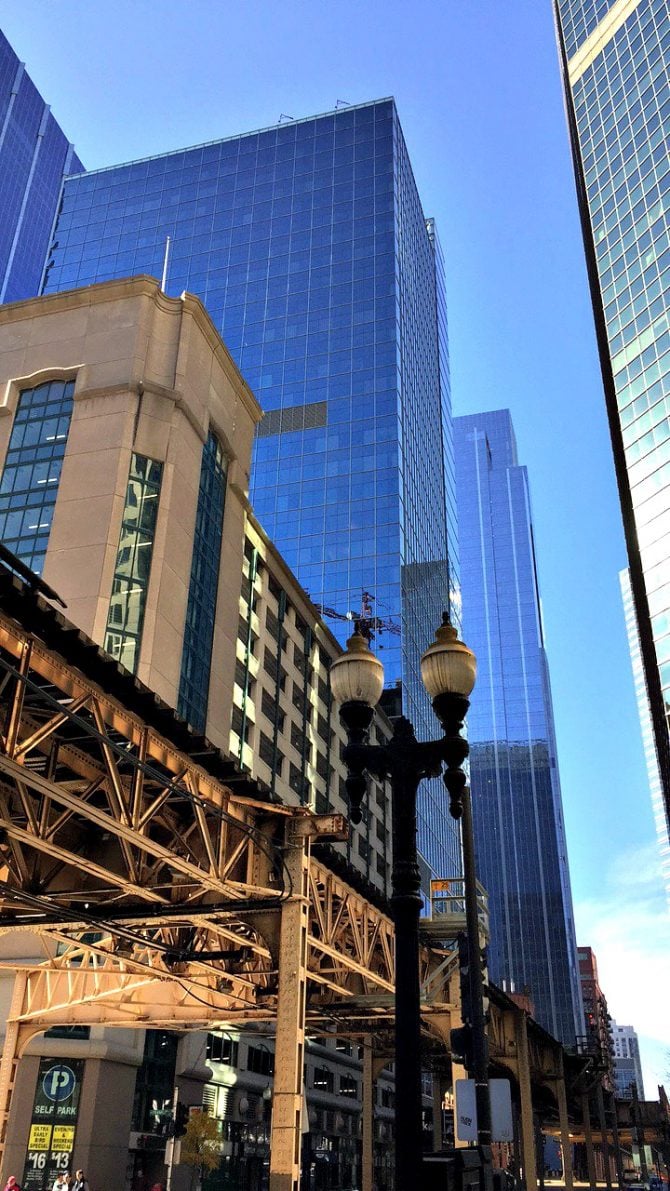 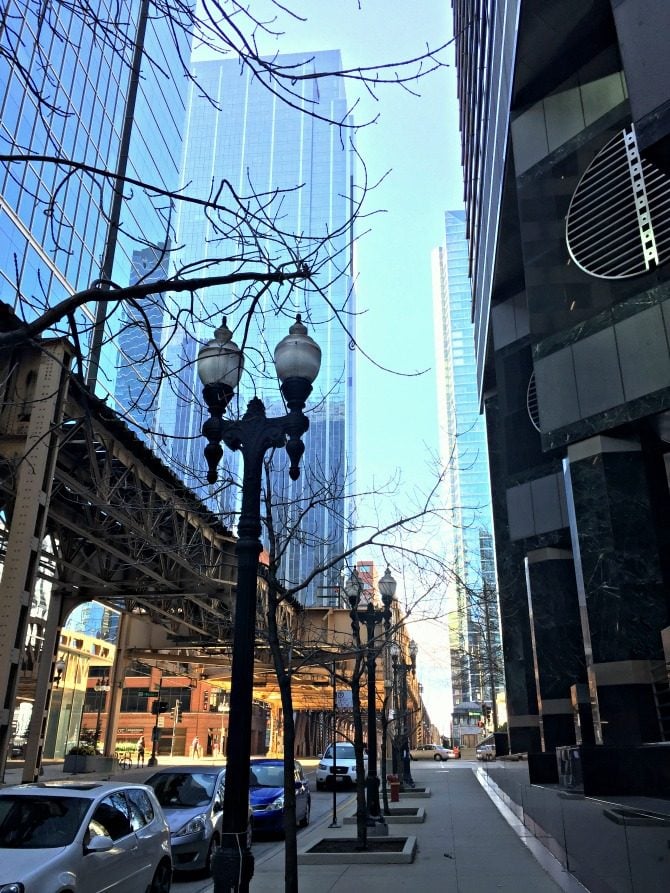 I didn’t see many landmarks on my last visit, so my friend suggested we take a walk around Millennium Park, which included some touristing by Cloud Gate, aka “The Bean.” With all of the other visitors putting their hands on it all day, the shiny surface got pretty murky once you walked up close, but it was still pretty cool to see the city skyline and fall trees in the reflection. 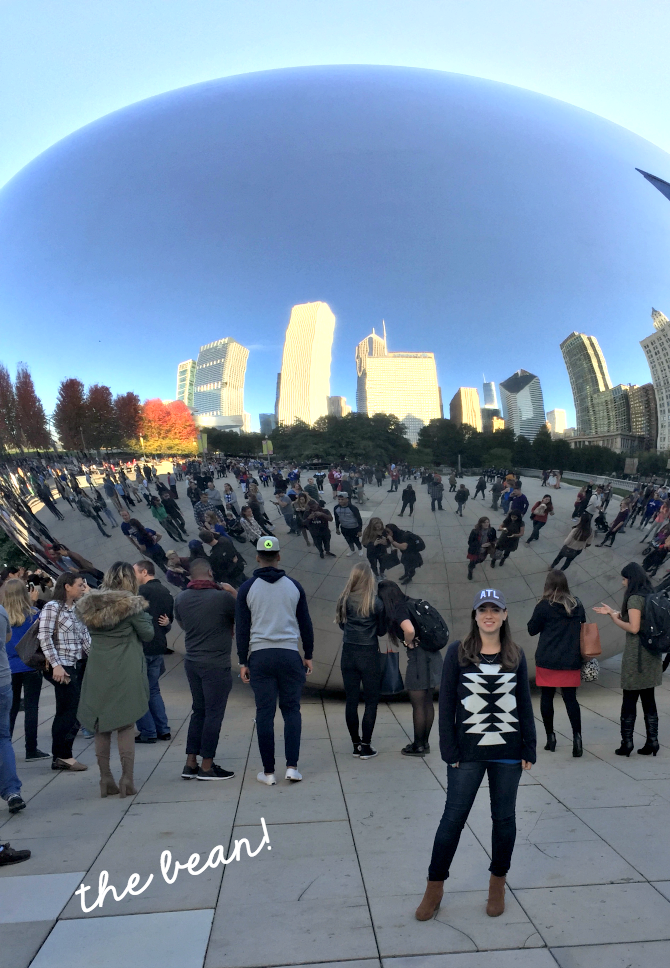 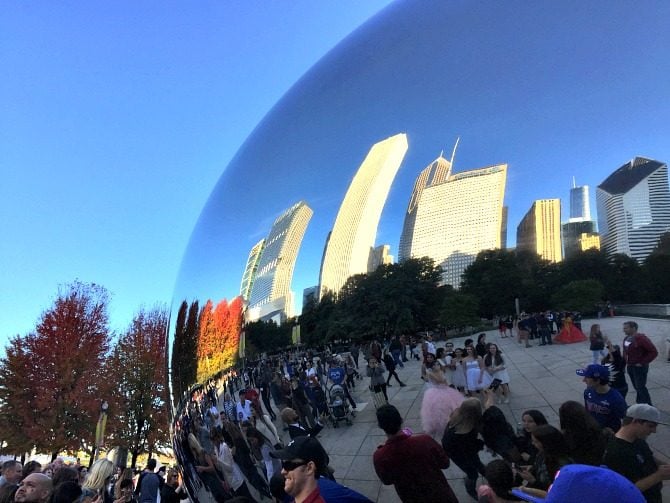 There’s nothing particularly significant about this building. I just thought it was cute. 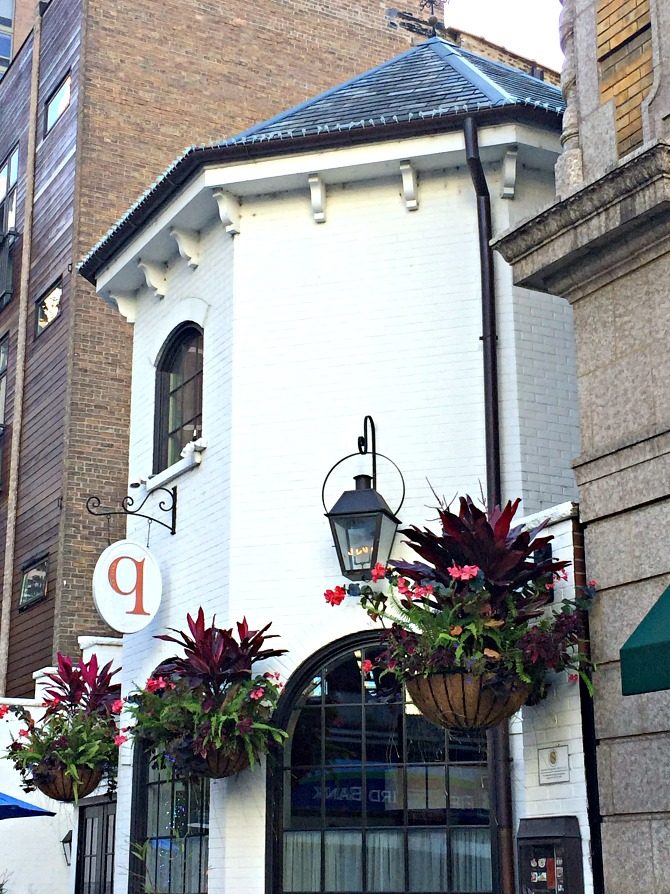 By the way, just a few weeks before I took this trip, I bought a hat at a local market and I’m totally smitten with it. I have rarely worn hats in the past, but I can’t seem to take this one off! Be prepared to see it in my tutorial videos and posts in the future! (Oh, and family – it comes in other colors, just in case you get stumped over the holidays…) 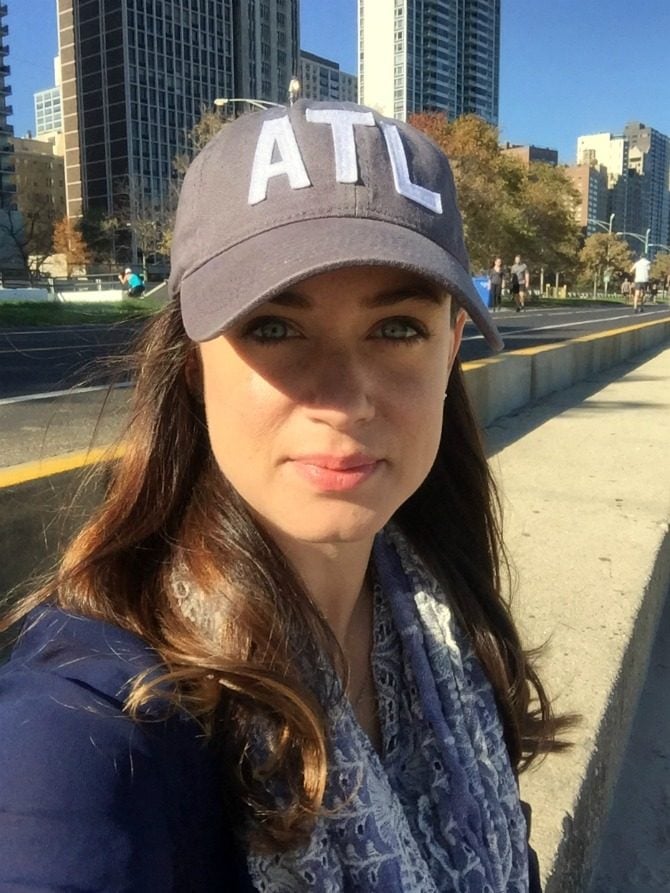 With all of the fall leaves blowing about everywhere, each neighborhood I passed on my walks around town became photo ops. And speaking of fall leaves… 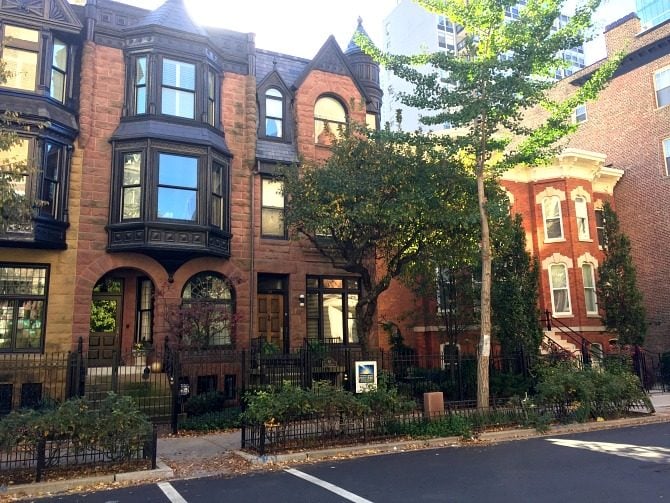 I know I already shared this one, but it’s worth repeating. BAM.

Swoon. I just… call it basic all you want — this gave me heart eyes emoji face. 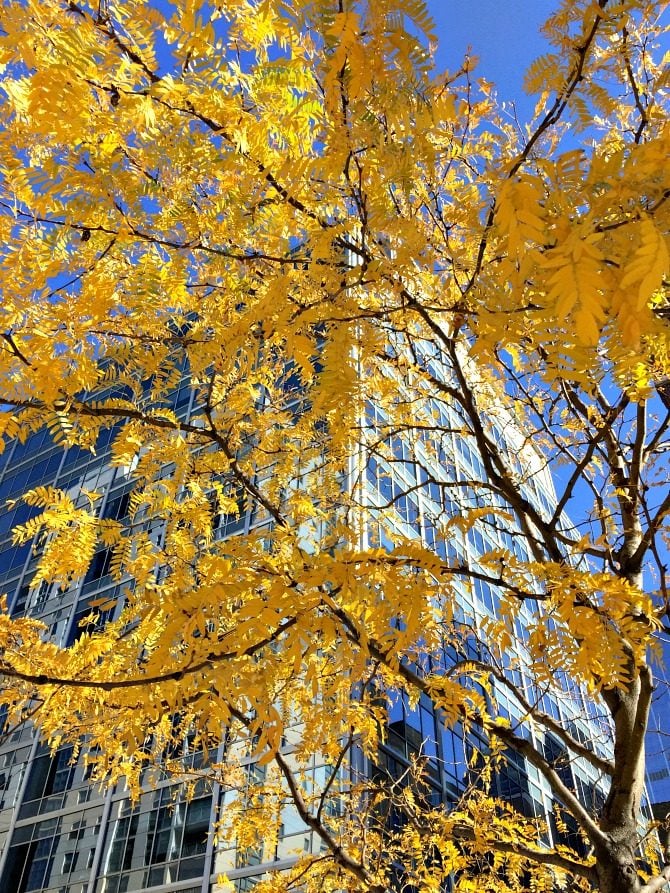 Because my friend lives in a high rise in the West Loop area, I had a lot of fun snapping a few skyline photos. Both during the day and at night — the view was pretty incredible!

The shape of the building below is specially designed so that when you walk near it at ground level, the bottom curved area is at the exact angle to reflect the river as you walk by. 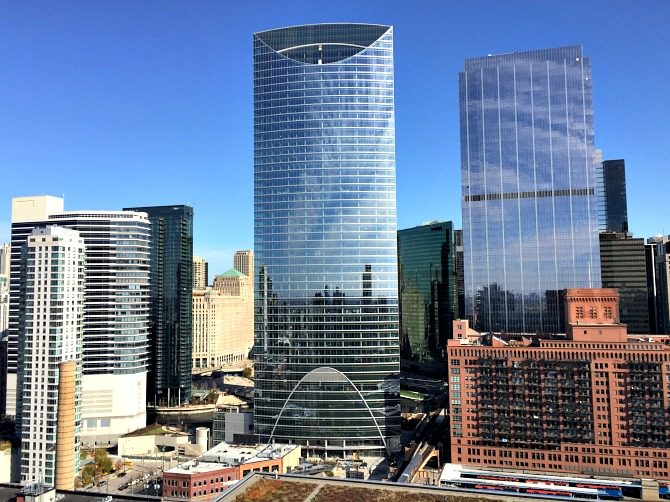 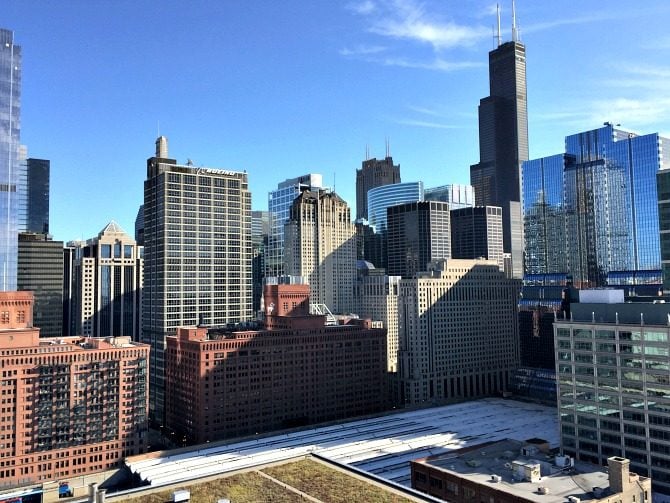 And as you might have heard, Chicago had this strange little phenomenon going on around the entire city… W’s everywhere. I wonder what that could be about?* 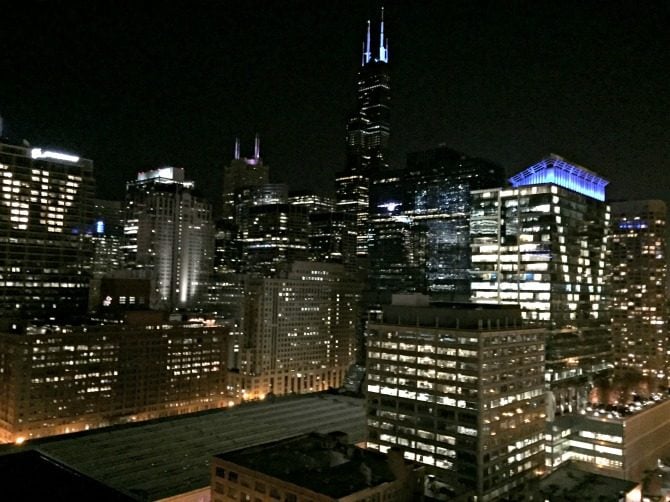 Of course, I wasn’t going to miss seeing Wrigley Field… especially after a certain 108-year wait to see Chicago at a time like this! Most of these pics won’t reflect it (because I deliberately tried to leave strangers out of my photos), but I was in awe of the sheer number of people. It. Was. Insanely. Crowded. I added some video on Snapchat during my trip, so hopefully some of you got a chance to see! 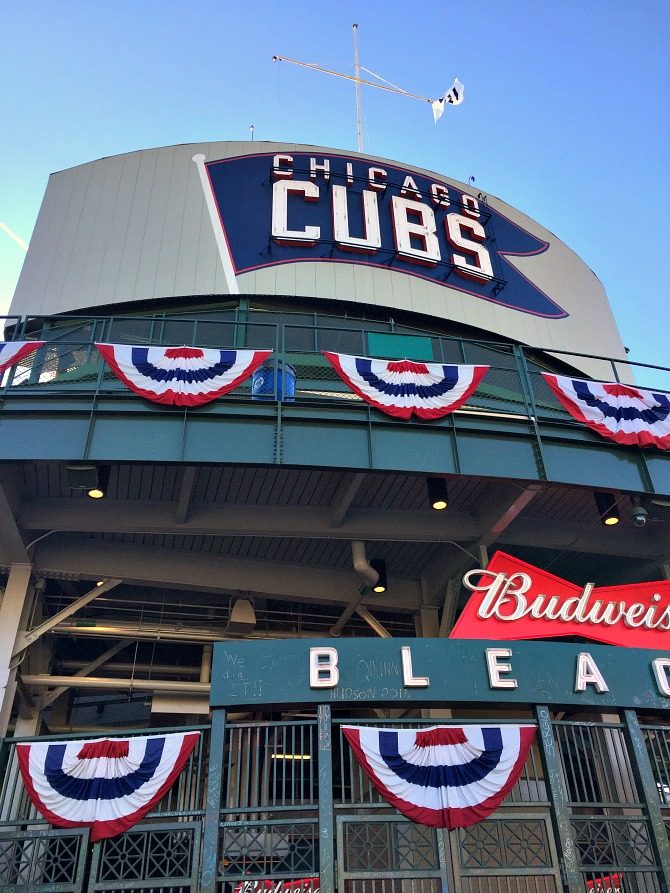 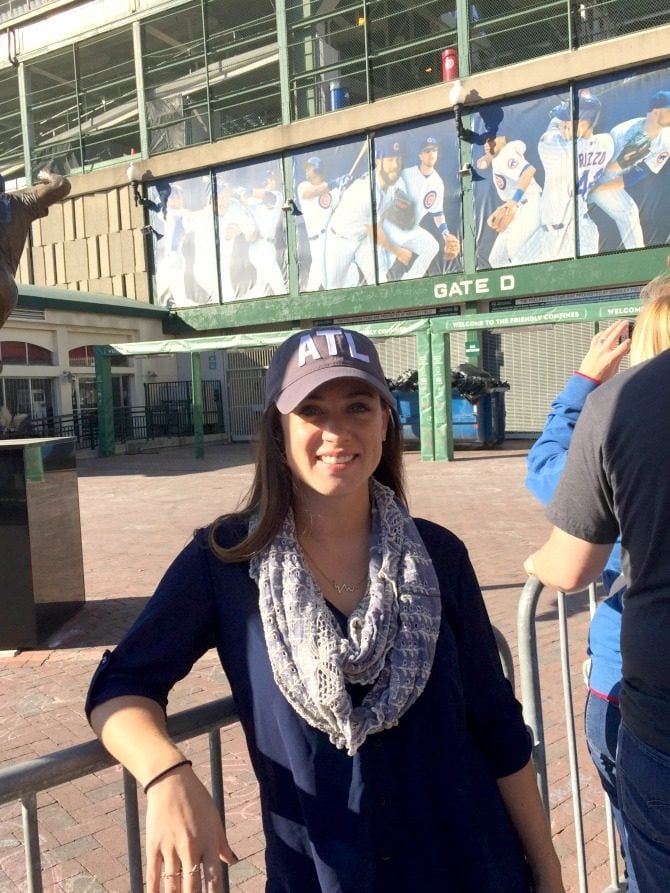 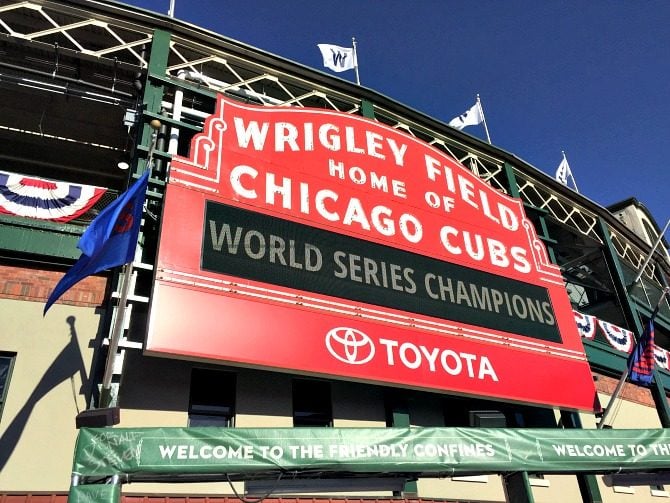 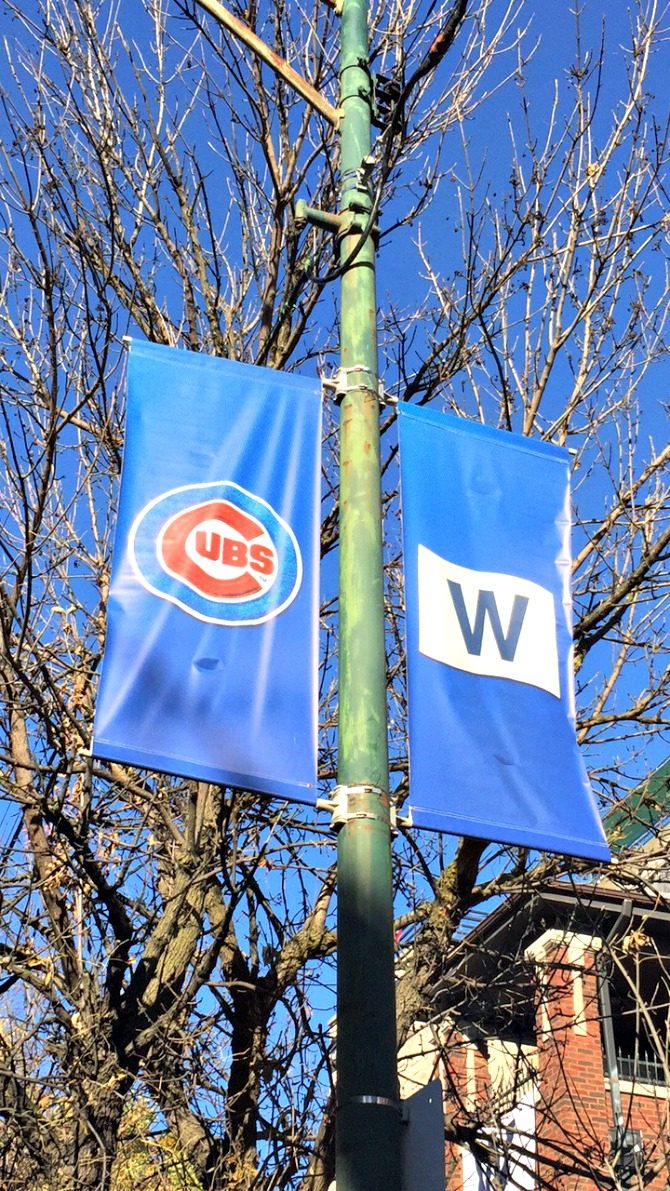 Nearly everything — especially the bricks along the outer bleacher walls — was covered in chalk messages. Many were written in memory of departed Cubs fans who didn’t get to see their World Series win, and it was a really touching sight to see in person (especially with so many kids and entire families all dressed up in Cubs gear, too). Since leaving town, they announced that they have discontinued this for the season, but witnessing (what Chicago fans hope to be) the birth of a new post-season tradition felt pretty cool. 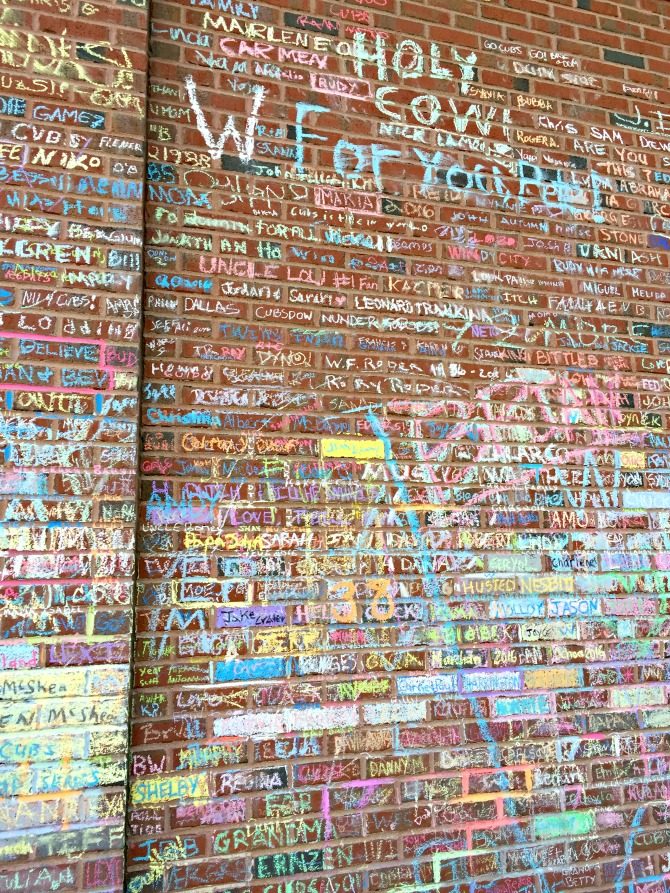 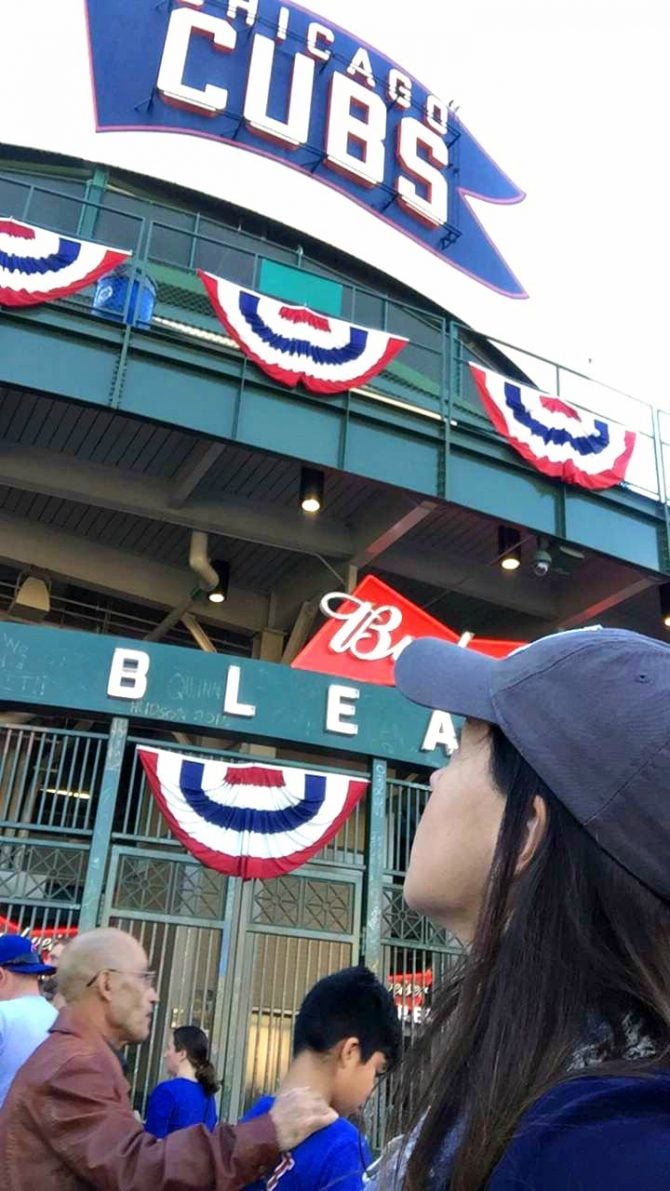 Let’s be clear about one thing on this trip: I stuffed my face with a LOT of food. 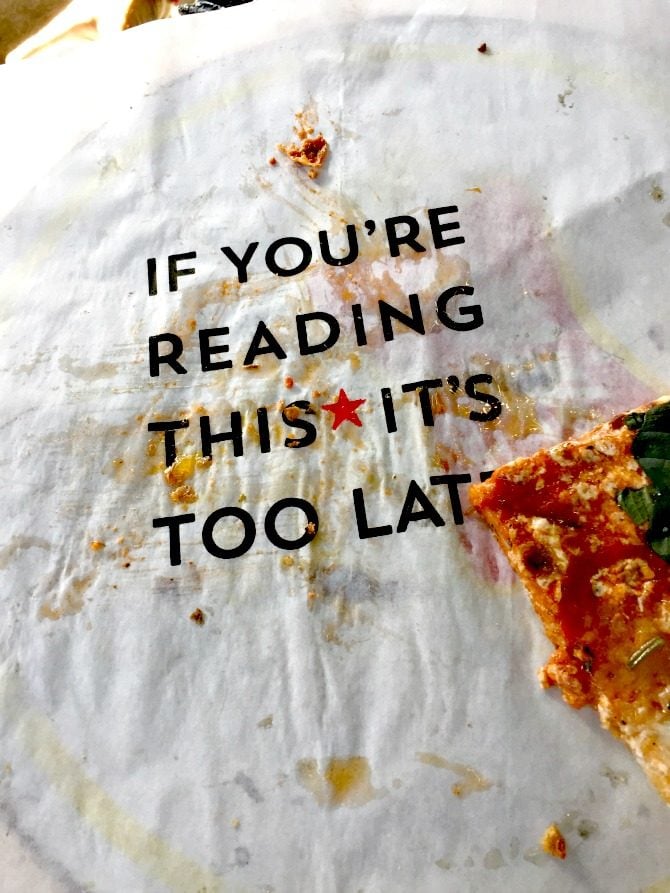 That whole pizza was ALL mine.

The Chicago weather was perfect for eating outside in most cases, so that’s exactly what we did. Oh, and I think I’m starting to really like Old-Fashioneds — as long as they have a good amount of citrus (and are accompanied by watching lots of football). 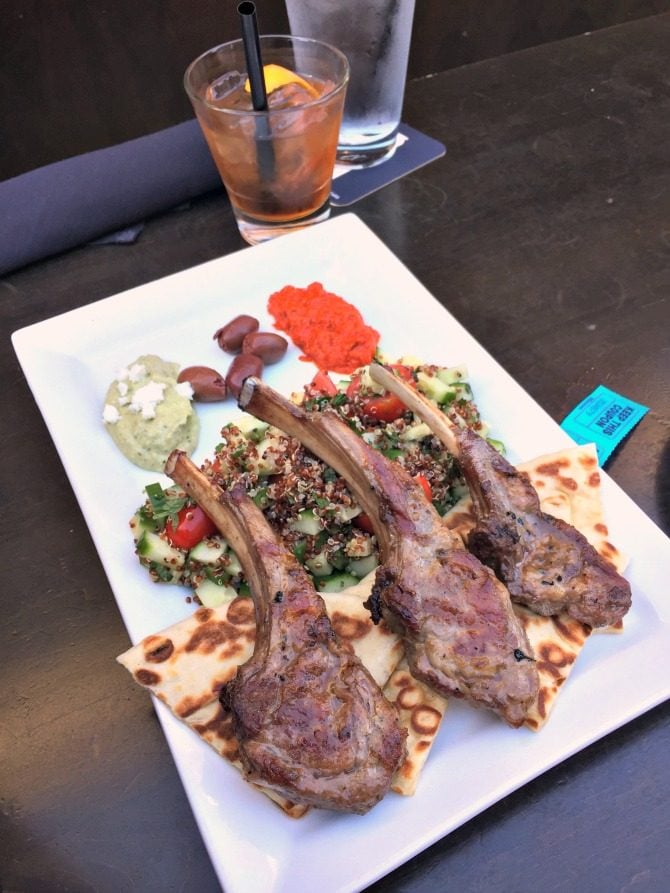 Last but not least — dessert! My friend made a comment about me looking a little skinny lately (something I’m planning to elaborate on more in a later post… there’s a thing going on with that & this summer, so I’ll get around to it), so we headed over to a restaurant (Bar Siena) one night for bombolonis (a puffy Italian donut) and a giant ice cream sandwich. I shared… I promise… a little. The best part was the candied pretzel bites used on top! #nomnomnom 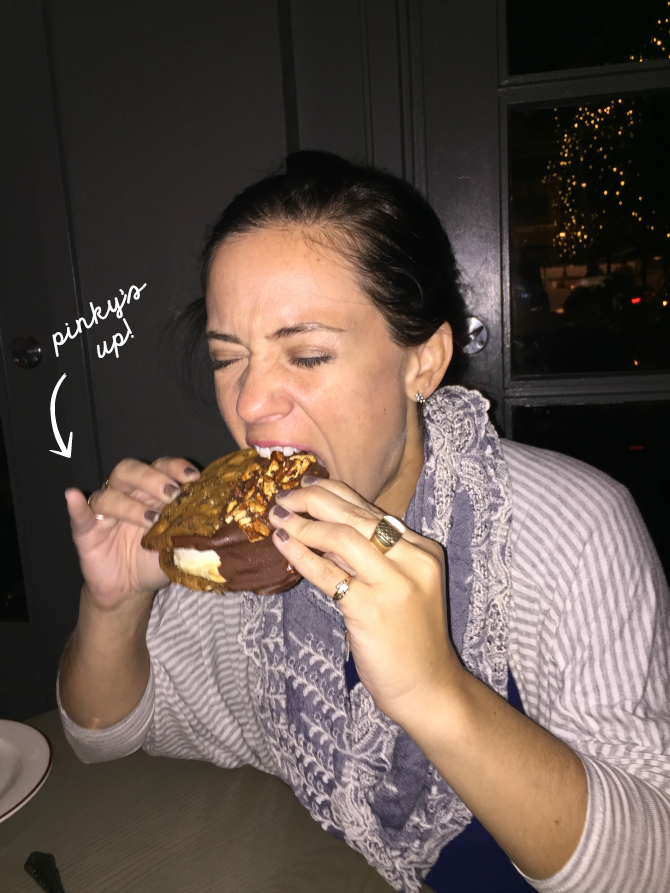 Does the face below face look familiar? It’s Ann Marie from White House Black Shutters! Normally we only see each other at blog functions like Haven, but it was wonderful to meet some of her kiddos and spend the afternoon catching up with her at the zoo. I’m always kind of in awe at how some of my most meaningful, genuine friendships these days are all because of this blog. I wouldn’t have met her or some of the other amazing people in my life without it. And I’m so grateful for that. <3

The actual point of the whole trip was to not only visit friends, but to see one of my favorite artists (Joshua Radin) as a sort of make-up trip for having missed him performing in Atlanta this summer (I was going out of town at the time). I usually don’t make a big deal out of meet and greets, but I (surprisingly) spotted him just as he made a beeline back to his bus, and he graciously agreed to a quick photo (the excitement of which you can see in my face… but maybe not so much his). 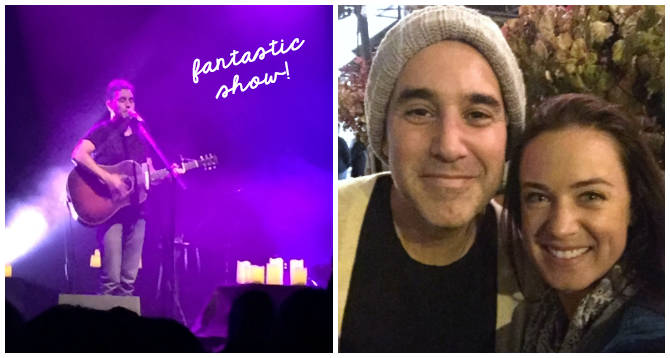 All in all, the whole trip was one of the best I’ve had. Traveling is so restorative for me… it just helps me find some inner peace and reminds me of just how big the world is around me, which is nice to reflect on. There’s a lot of truth in the whole, “pay for experiences, not things” mentality, and Chicago even proved to give me a home-away-from-home feel… something I consider pretty rare. 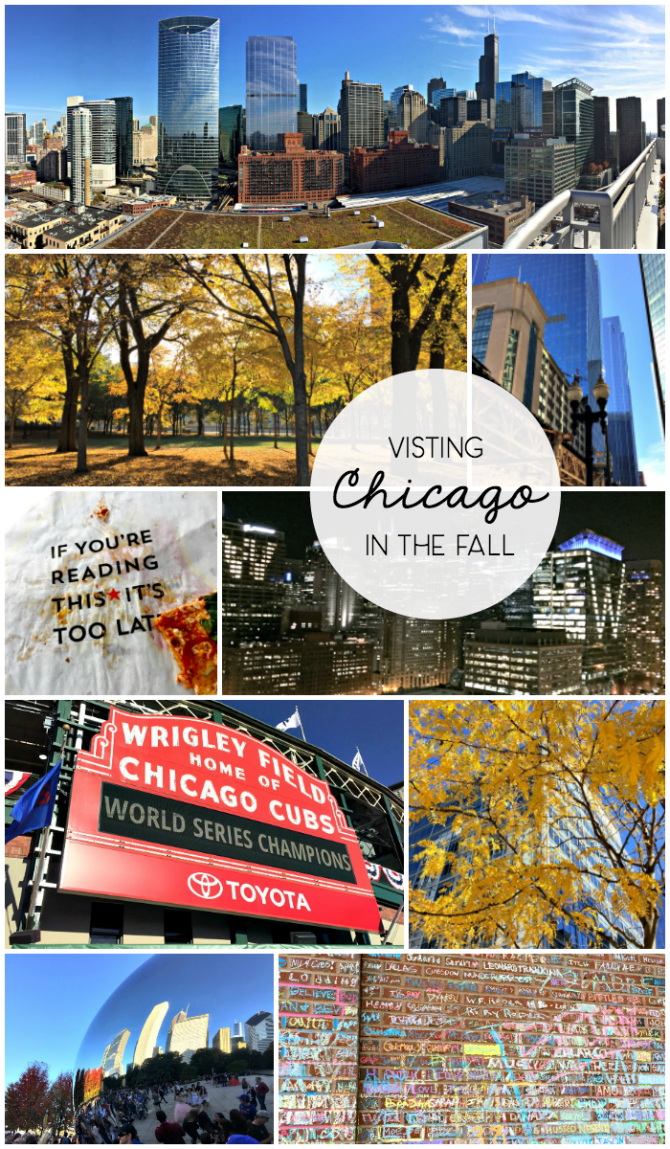 How about you? What was your last trip? Where are you planning to go next? What cities give you that home-away-from-home feeling?

« Reader Remarks: What Is Your Biggest Home Pet Peeve?
Tips for Selling Furniture on Craigslist »