On my last dining room update, I shared a glimpse of the new rugs going into the room: 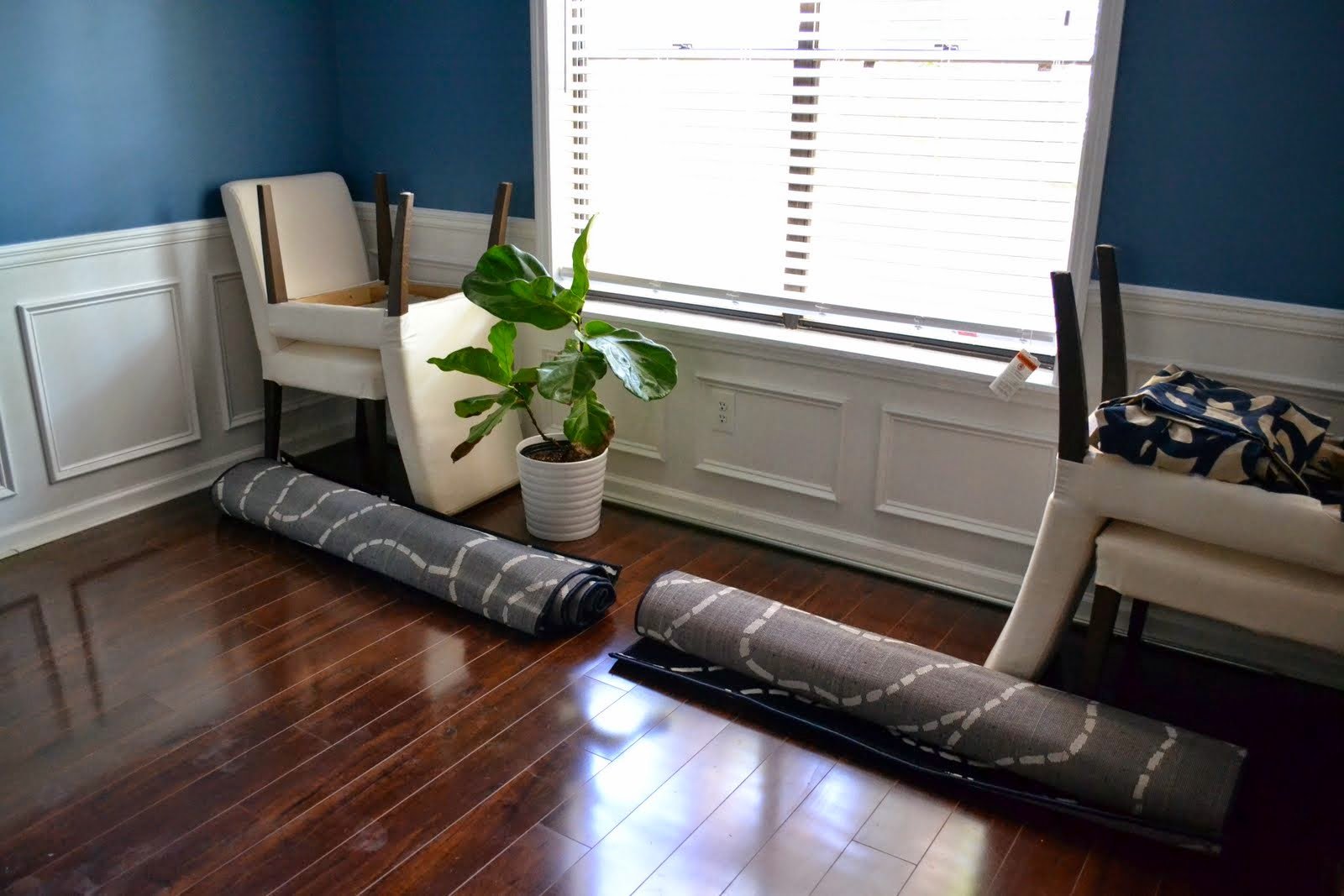 You long-time readers might recall the last rug in this room. Like many budget-conscious decorators, I bought what I thought was a large enough size, but wound up looking wimpy. 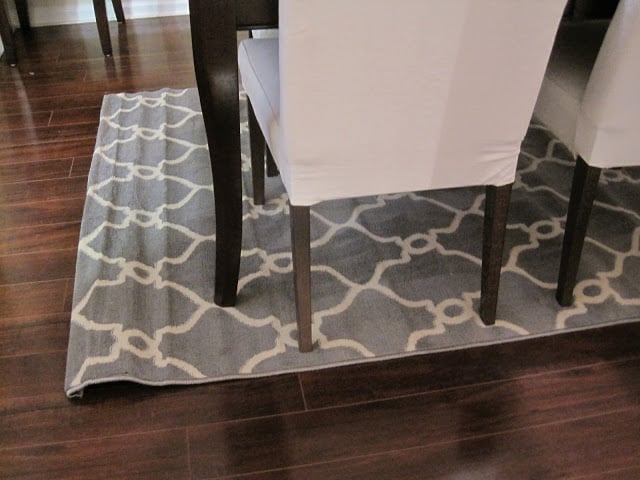 While budget is still an unavoidable priority for me when it comes to decorating, I’ve since learned that a 5×8 simply wasn’t going to cut it. I needed something larger (according to most design guidelines, I needed a rug big enough to allow the chairs to be pulled out and still be on the rug). Which, of course, would solve one problem (size), but present another ($$$). With larger rugs pushing to well over the $200 mark, I wanted to find something budget-friendly, but still sizable for the space.

So, I did what any similarly-minded DIYer might do:  I faked the look with less expensive materials.

If you were to look online, you’ll probably find a number of these tutorials already; however, instead of using duct tape (as many of them suggest), I went with no-iron, single-sided carpet tape. The main reason for this is that carpet tape comes with a mesh-like fiber weave in it, so the tape is reinforced and doesn’t rely solely on the strength of the adhesive itself (which can sometimes be an issue when you’re trying to stick to a fabric or rubber backing). Plus, I distinctly remember from high school how effectively sticky carpet tape was for pageants (another post, another time, ha!). Most carpet tapes come double-sided, so here’s a pic of the single-sided version I purchased (so you know what to look for): 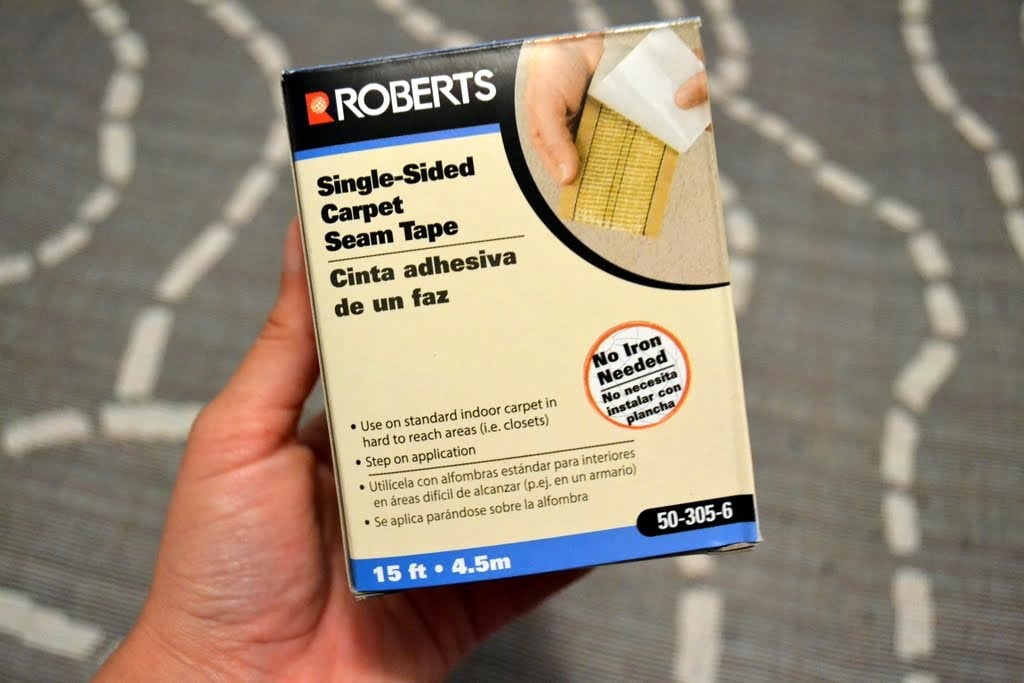 There are duct tapes made similarly, but I couldn’t find them on two separate trips when I went looking (all I could find were the colorful varieties and the ones that say they’re strong but don’t have the reinforced backing that I wanted… which have let me down in the past).

Alrighty, on to the tutorial. Some of these photos were taken at night, so you’ll also be able to see how drastically different this rug looks in different light (I just love how dark it is, though). <links may contain affiliates>

1. Lay out both rugs, backing-side up. Since most rugs come slightly curled if they’ve been rolled up and packaged for a while, allow it time to flatten out. This will help you keep both rugs perfectly straight along the seam. I failed to do this enough before taping things (trying to protect a new rug from dog hair will do that to ya), which is why you’ll see my lovely fiddle leaf fig sitting on one end of the seam to keep it from curling in the last couple of photos (a temporary measure until it’s had a chance to lay flat). 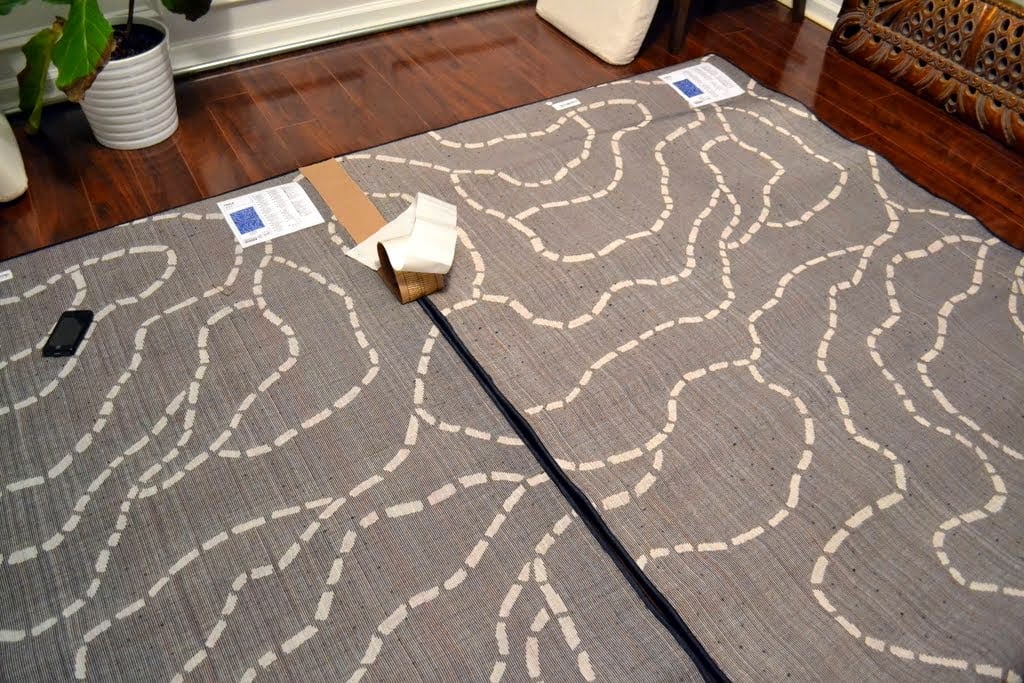 2. Join both rugs along the seam you want to tape. It’s best to lay it out completely and see if the corners will match up. Even though you are supposed to have a rug that’s exactly 6’5″ (or however long yours is), one may be slightly longer than the other (after all, it’s not a super expensive rug), so you’ll want to work both of them until it looks balanced on either end.

3. This project is easy enough to do on your own, but if you have help, have them force the seam together as tight as possible (even though it may seem like it’s laying as close together as possible, when you flip it over, you don’t want to see the fibers of the carpet tape peeking through). A helper ensures that both sides are pressed tightly together while you tape, but it can still be done solo. You will just need to lay down the tape in shorter lengths and keep joining the seam as you go.

4. Remove the backing from the tape and press down firmly with the tape on either side of the seam. Carpet tape is especially sticky, but can still peel it off if something goes wonky (and is sticky enough to use again, so you don’t have to start over). 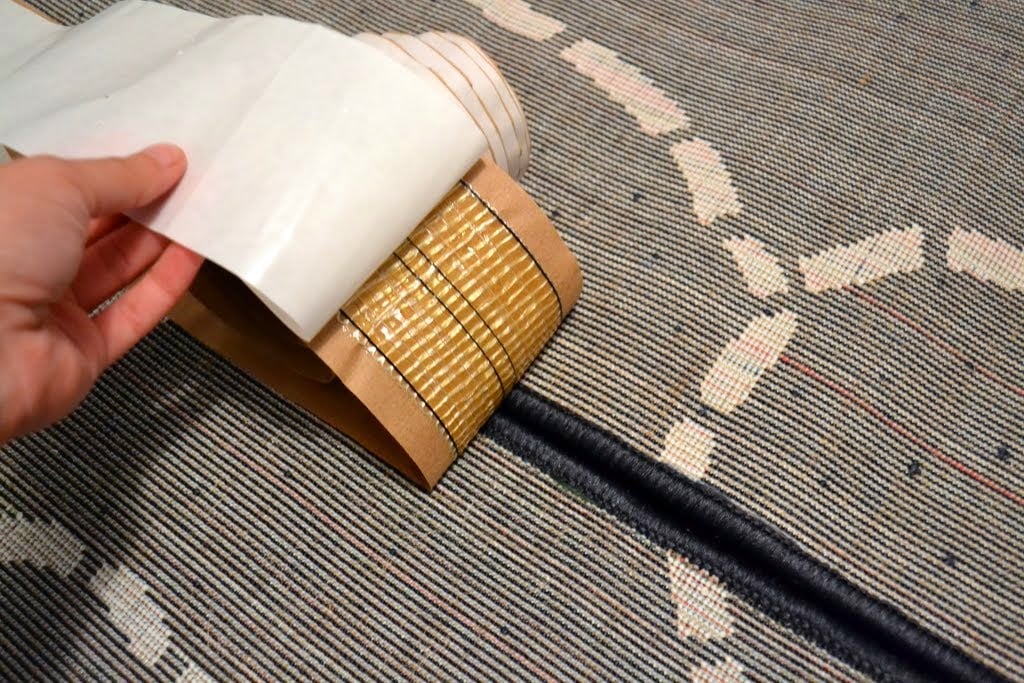 5. Repeat steps 3 and 4 until you get to the other end of your rug (pull/push the seam as tight as possible, remove the backing and tape that length of the seam, repeat). Cut off the excess. If you’re joining two 5×8 (or approximately-sized) rugs together, a single roll of tape should yield about two large rugs.

6. Flip everything over and mash the seam with your feet (this is the pro way to do it; it even says so on the box). 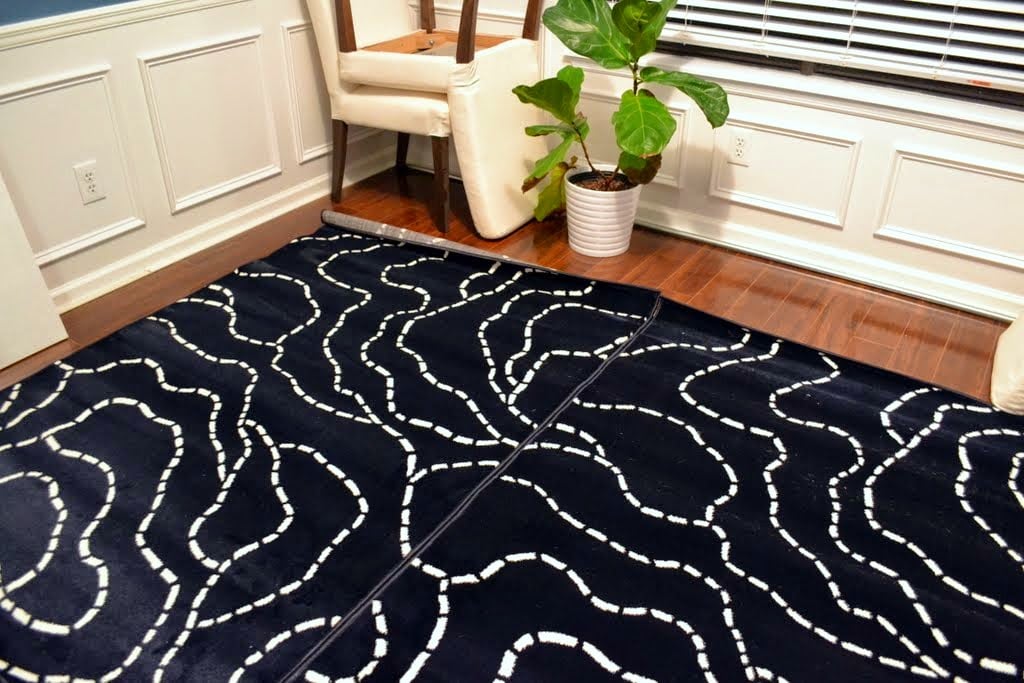 The two rugs I used (FERLE, from Ikea) were $29.99 each, so when adding the tape into the cost, I essentially paid about $65 for my new rug. The seam runs directly under the table and has enough clearance on all sides for the chairs when they are pulled out (and a small strip of the flooring on all sides so things look balanced), so I’m pretty happy with the result. Here’s what it looks like in the daylight, now that the table and chairs are moved in as well: 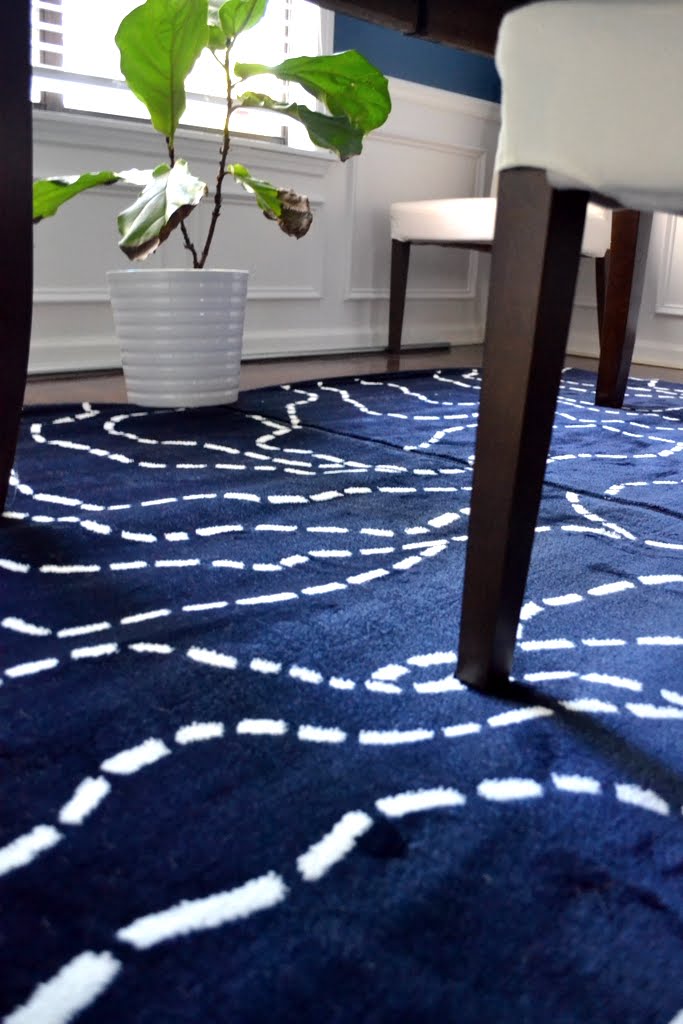 Things are still being moved around, but the pic below shows how little you can see the seam when you’re not specifically photographing it. This is one of those guests-will-likely-never-notice types of projects, which is exactly how it should be. 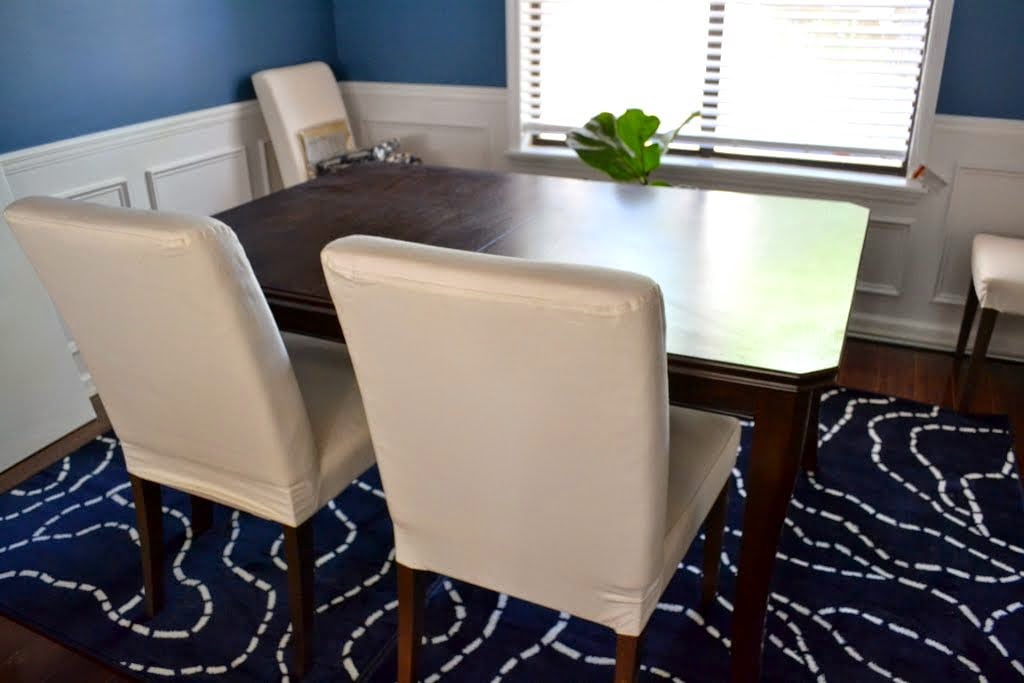 Looks like this room is finally looking like a dining room again, eh? A few more decorative projects (curtains, lighting, art), and we will be able to call this one done in no time.

…Or about six months in Sarah time. 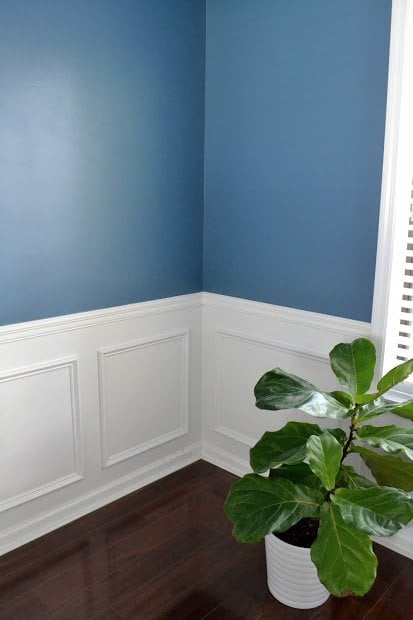