I guess you could say I’m on a wallet-draining roll lately. In addition to my spontaneous purchase of two vanities for the master and guest bathrooms and the splurge for a laptop table, I also went to Ikea after work one day last week.

Every time before this experience, I’ve gone to Ikea on a Saturday. As much as I love their prices, the other circumstances surrounding a trip to the store (the parking, the crowds, the more than 30 minute drive, the odd smell of meatballs in the morning) always made me feel like it was, well, a chore. Getting through the store takes forever, which I realize is on purpose, but by the end of the dizzying maze, I’ve usually misplaced the second or third list I’d created hoping to get to the right products, getting flustered/distracted, and ultimately snarling at a stranger who gave me the stink-eye because I couldn’t control my cart (why do I always get the cart that only wants to go sideways?).

I realize that my opinion may not be popular in the Ikea-obsessed blog world, and I certainly don’t hate their products, which is why I continue to return despite the dread I’ve felt before planning a trip. But I find the experience of shopping there on a Saturday akin to visiting Walmart on Christmas Eve. In other words, H*LL on Earth.

This time around, I decided to go after work simply because it’s a shorter drive from my office than it is from my house, and I’d been window shopping online for an anti-slip rug. Most stores that sell them in the size I need are $30 or more, which means I’d be $60 in the hole for something that goes under something I’m trying to decorate the house with. It won’t even be seen, and I’m cheap. Ikea sells them for $9.99 for the large ones, and you can trim them to size. Perfect.

But if I’m going to head over to a store I consider a chore, I’m not going to make the drive just for two rug underlays. C’mon, I might as well make it truly worth my while, right? So instead of my usual and impractical “I don’t need a cart” method (which turns into my “Four dollars no way I need six where were those carts?” method), I had a better game plan:  I made a list of what I wanted to get on the ikea.com site, emailed the list to myself, and pulled it up on my phone as I walked through the store. Not only did this eliminate the putt-putt golf pencils (does anyone else have this association too?), but it meant that I actually had a budget.

I arrived with the list in hand phone, and immediately felt less stressed than previous trips. And to my surprise, the place was nearly deserted instead of the usual madhouse I was used to.

After the experience of visiting the store on a weeknight, I’ll say this:  I’m never shopping at this store again on a Saturday. The difference was – delightfully – night and day. The experience was so jarring to me, I actually took this photo of one of the model kitchens with my cell phone – and no one in it. 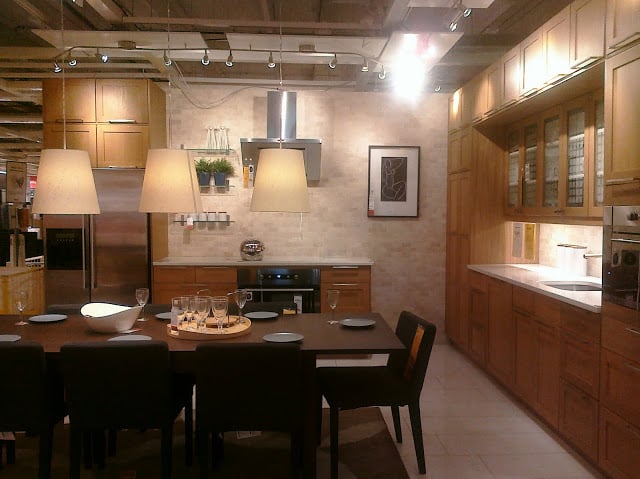 I realize I’m making a really big deal out of this, but it was just so fun for me. Instead of feeling awkward with my sideways cart and getting annoyed at others (I know the people there on a Saturday are just as annoyed, if not more so, as I am, so I don’t blame them really for the attitude – but sheesh, get out of my way already!), the entire stroll through Ikea this time was different. I could casually walk through the store as fast or as slow as I wanted to, take note of the little rooms on display, and even turn around and go back for something I thought I’d missed. Try to do that on a Saturday, my friend.

The fact that I could easily go back and change my mind about a purchase made it easier to stick to my budget. I felt free to think:

As you can see, I left the place with quite a haul, and this isn’t including the two larger boxes I had to precariously lift and fit into my car for the desktop and bed frame (the days I wish for a truck to haul things are few and far between, but on those days, I have to remind myself how much money I save on gas). 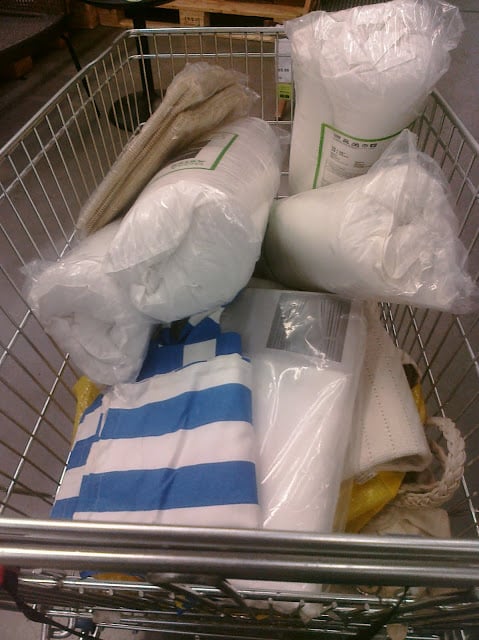 You can probably guess where I’m planning on putting a few of these items, but we’ll get to all of those projects in time. I’d like to be able to say I left without any impulse buys, but I did walk out with one:  this adorable blue bag that I plan to use for an upcoming beach trip. It was only five bucks and the perfect size for a beach towel, magazine, and sunscreen. 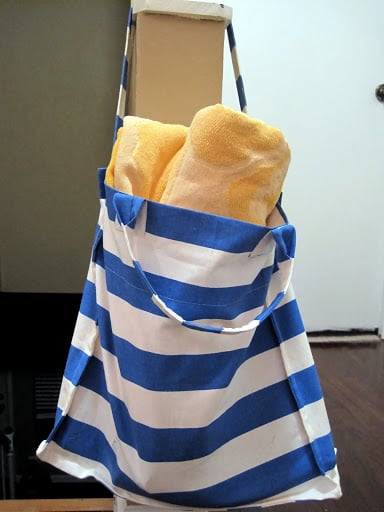 Alright, enough blabber for today. Time for your feedback. Do you usually plan out your shopping trips, or do you wing it? Does anyone share my distaste for crowded stores on weekends? I know I can’t be the only one. 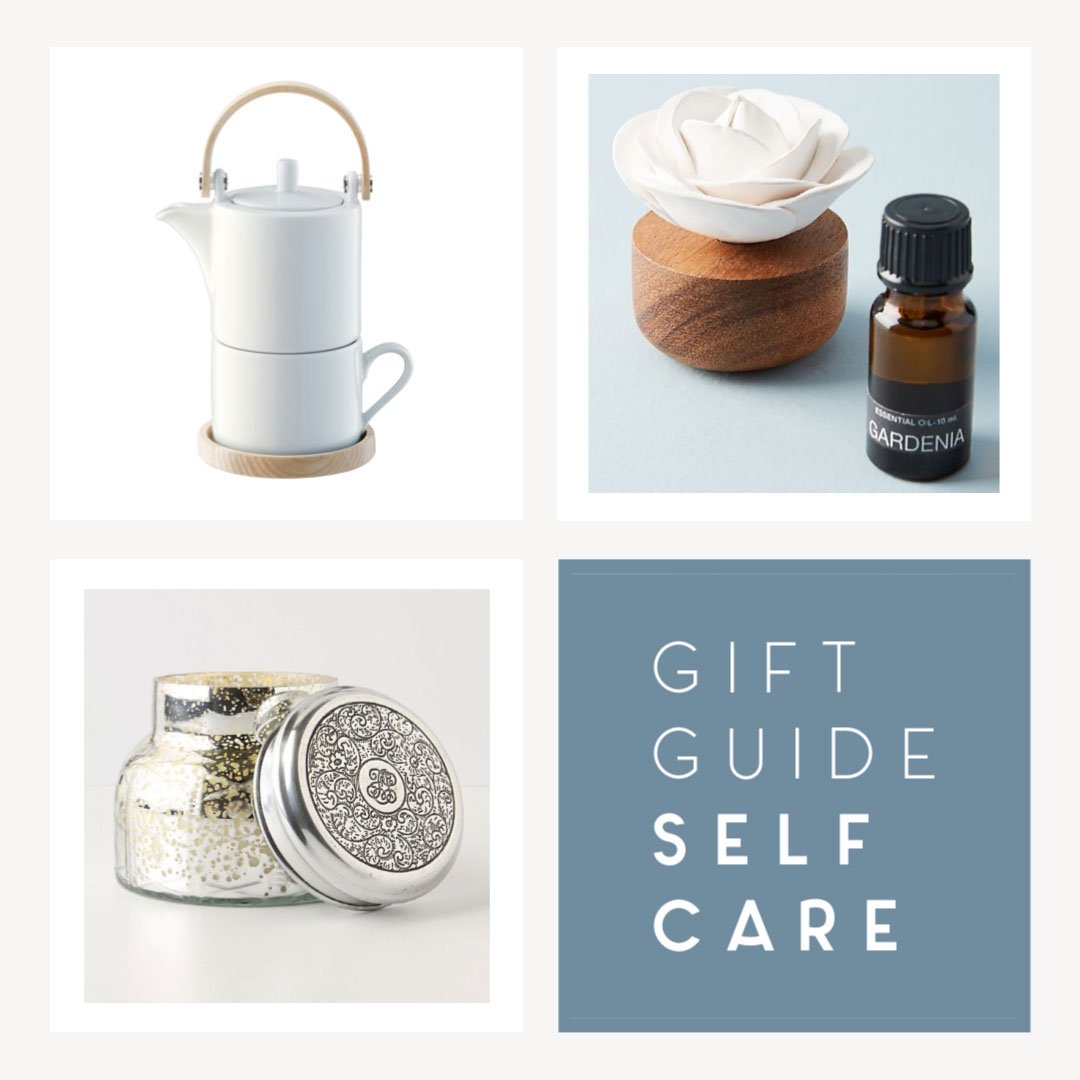 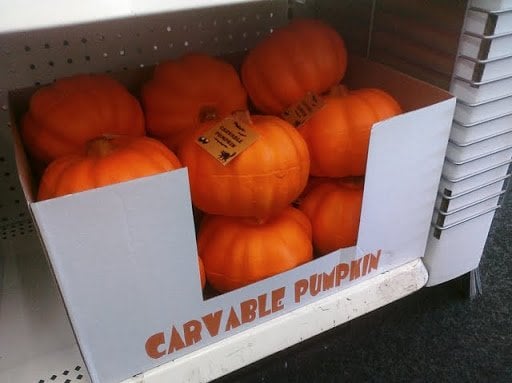