This is one of those kinds of posts where there are a lot of little things going on to update you about; some of it is mushy, and none of it really warranted its own post (because most of the pictures are crap). It’s just going to be a jumbled mess of completely random things… like what it’s usually like to be inside my head.

This year, I decided not to attend the Haven Conference in Atlanta (which started on Thursday of last week). I have gone every year since it first began and really enjoy seeing everyone (see recaps here, here, and here from the last three years), but I just felt like this year wasn’t in the cards for me. Still, since I live nearby, I got to do the best part after everyone was finished with classes: stop by their hotel for dinner with some blogging besties, like Ann Marie from White House Black Shutters. I am still so very glad that she and I met the first year of Haven. She found a selfie stick in her swag bag, so we had a little bit of fun trying to get it right. 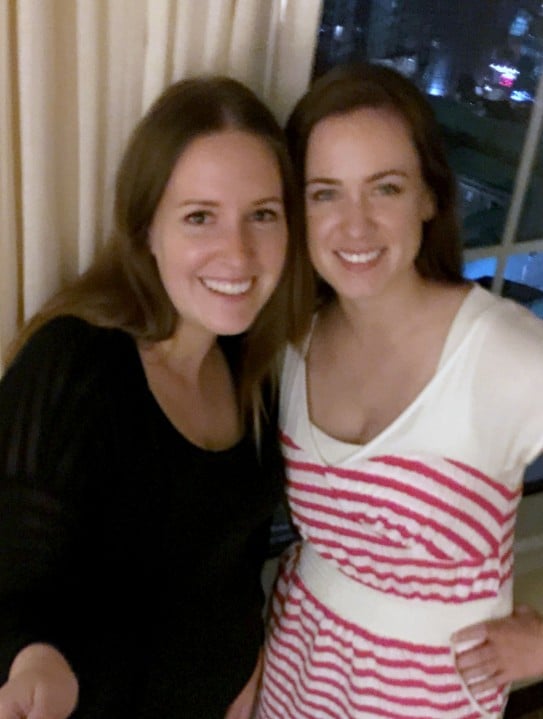 And, I also got to meet baby Kate…

One down, four to go (unless she has more, of course).

On Saturday night, Brittany from Pretty Handy Girl had a small get-together that I also stopped by for, and then we all went down to the lobby to say some final goodbyes. So, of course, pictures had to be taken even though we were all tired and had terrible lighting. 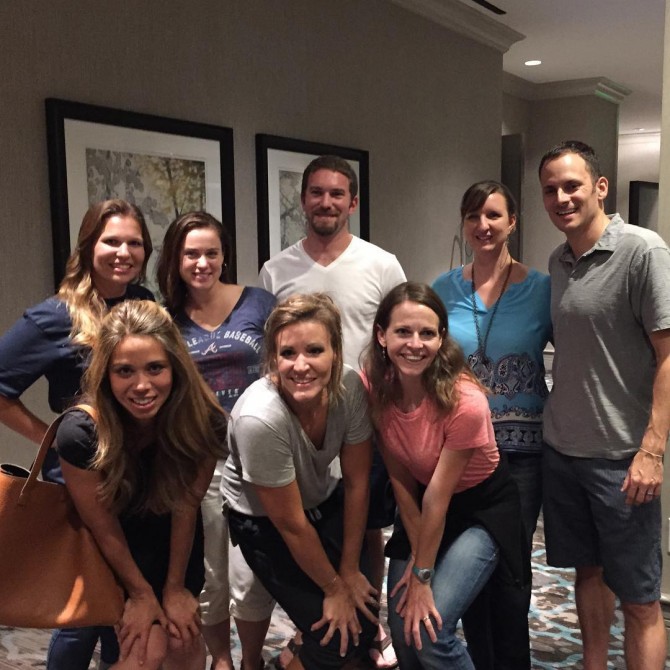 I came directly from a baseball game, which made things a little comical since there were some afternoon showers that soaked me through. I looked like a drowned rat (and my jeans were still wet!), but I’m thrilled we at least got one. The fact of the matter is, we bloggers love to TALK, and there’s very little time to do it. I always walk away wishing I’d had more time to spend with them. I guess the lesson here is that this is what real friendship sometimes looks like; we simply burn through the hours of great lighting and high energy, and instead put down our phones and just catch up with each others’ lives. 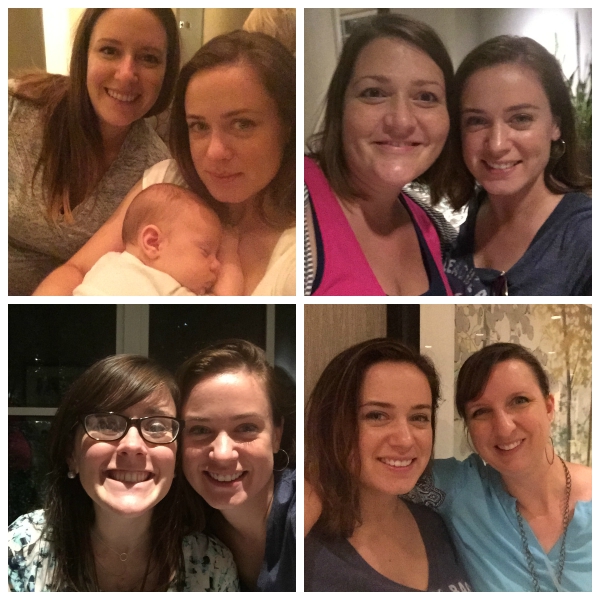 Earlier that same night, Brittany filmed a bunch of us (live on Periscope) as we sat around talking. Which, holy cow, I think is going to be my new favorite app thing to make foolish decisions with. 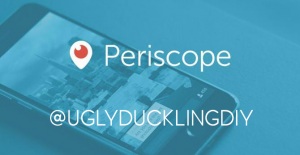 It’s pretty narcissistic as far as apps go, but it’s also a lot of fun to see and interact with folks in real time. As I looked through it, I immediately thought of the likeliest subject lines you might see in the future if you were to follow my account (download the app and look for @uglyducklingDIY if that’s the case):

To be honest, it will probably be more of the fun-to-shoot, behind-the-scenes stuff that I share (or just me, being awkward) rather than DIY tutorials. Since the Periscope broadcasts expire after 24 hours, any instructional stuff I think is useful will be made primarily for Youtube (I know I keep saying that I’m trying to do videos, so maybe Periscope will make me less camera shy?). I’m going to go ahead and apologize in advance for anyone who hasn’t yet figured out that I have a colorful vocabulary.

After a couple of days of hanging out with DIYers who love talking projects, I have quite a few on my mind that I’m dying to get to, including the counter for the laundry room, finishing the kitchen walls, and some additional build projects for the workshop. I do have to say though: after last week’s participation in Jen’s #oneboardchallenge, I have a new found respect for the DIYers who take time every week to post building plans. Guys, the work that goes into those tutorials is some serious work. I’m looking forward to the next challenge, but I’m going to need to kick my butt into gear and make sure I bring my A-game come September (click on the image below if you missed Friday’s post).

To start off on the right foot this week, I’m nearly finished with some Adirondack chairs for the backyard patio. I finished putting them together in my living room while watching TV (mostly because the weekend weather was muggy and blah, and I sometimes get the energy to build at night, so in front of the TV was really convenient!). They are now sitting in my living room corner while I try to figure out whether to stain or paint them (and what color). Any suggestions? 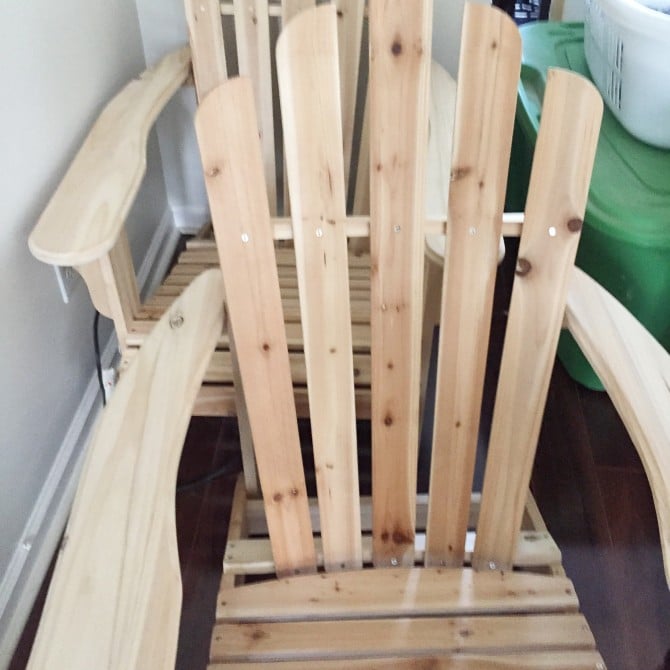 I’ve also been getting some new quotes for fixing the exterior siding. I got a few quotes earlier this year, which led to the whole tree-cutting thing, and then I just sort of stopped (which was kind of strange, since the exterior was the more important job, but I did the trees first because it made my summer project list easier). But after procrastinating again, I am more aware than ever that this project just can’t be put off any longer. Dollar signs are noisy little assholes, don’t you think?

I’ve finally settled on a new logo (!!!), which means that the new site design will be ready to launch soon! Possibly as early as next week. The layout will be a bit different than what’s going on now, but hopefully even better organization, better mobile, etc.

Finally, this… just because it made me laugh. 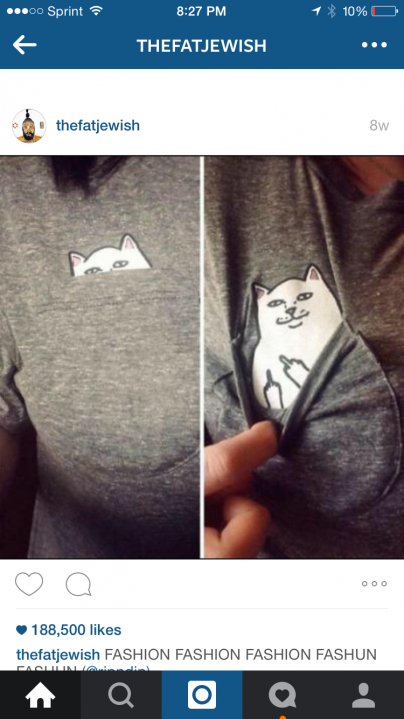 So, that’s what’s been going on lately. How about your world? What’s next on your to-do list?