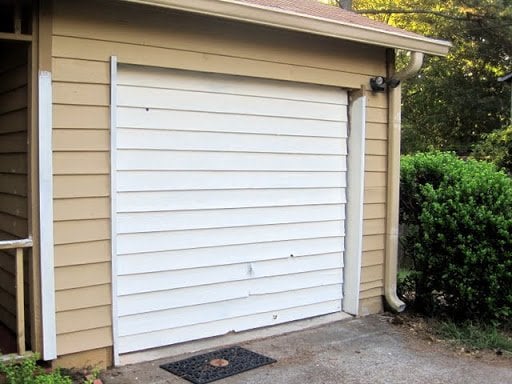 Yesterday, I revealed an updated look to the garage, which now looks a little something exactly like this: 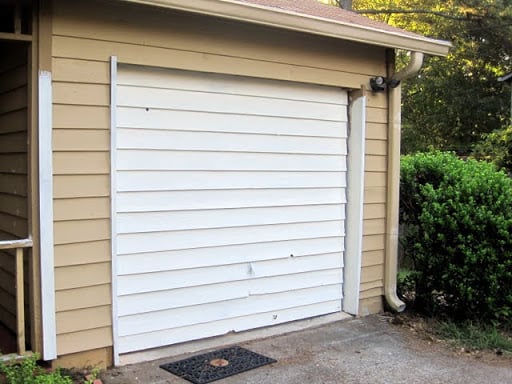 In case you were wondering, I stuck with the same colors as I revealed before. The main house color is a rich, gingerbread-y color called Basketry, made by Behr. I promise someday soon, I’ll manage to get a photo that isn’t at 9 AM or 8 PM so you can see the house color in the midday sun. 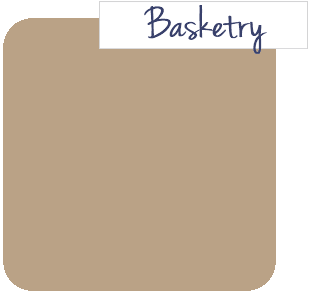 Painting the exterior of the house is no overnight process, but thankfully my neighbors are being patient aren’t throwing stones and waving torches (yet). For the trim, I’ve chosen a creamy white called – well, they didn’t get too creative – Rustic Cream. Also made by Behr. 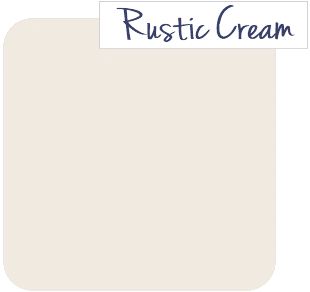 The paint on the exterior of my home needs to hide a multitude of sins. Luckily for me, keeping the paint at a low sheen (flat for the siding and satin for the trim) is doing just that. And did I mention the caulk? Thought so. Also, I’m using the paint-and-primer-in-one combo, which is going on really smooth and thick. Considering the rough surface of the cedar siding, the paint is going in all of the right places and getting plenty of coverage in two coats or less (with the subtle color change of the current dark brown to medium tan, one coat pretty much does the job; with the trim, it depends on how smooth the surface is to whether or not a second is needed). 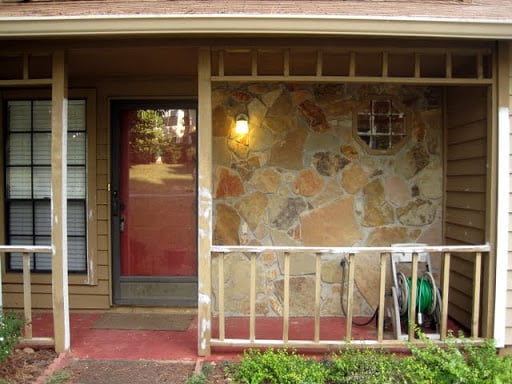 So far, the plan right now is to tackle the garage and porch front door area by hand instead of using a sprayer. I want to use a paint sprayer for the sides and back of the house, but the front cluster of windows and trim just didn’t make sense to do it any other way than by painting with a brush. Plus, it allowed me to work at my own pace and get a much better idea of what the whole house will look like with this color combo without turning it into a large weekend production (knowing my own failure rate for being happy with paint colors after first picking them, I didn’t want to get other people involved until I was absolutely sure I would like the finished result). It may take a little while longer, but I’m now much more confident in my paint choice and will be thrilled when I see it on the rest of the house.

As for the front door and painted stoop, I’m not 100% sure which direction I’ll wind up going. Not there is anything wrong with red, but the particular shade of red the door is painted with (combined with the general age and unkempt look of the house in its current state) reminds me of tetanus. I remember when I first went house shopping back in 2009, I referred to each house I looked at based on the first impression I had. There was the “green carpet” house and the “ugly bathroom” house and the “I think he got that tile for free” house. I certainly don’t want people to think of mine as “Oh, right – I have a doctor’s appointment next Tuesday.”

Black seems like an obvious choice to go with the tan and white, but each time I think of it I’m reminded of Guinness. I suppose that’s better than tetanus, but now I’m convinced I must be an alcoholic if I come home each night to a beer-inspired house. Perhaps instead, a nautical navy blue will bring a posh look to my so very not home. Hmm – beer, or Nantucket?

Since both of the paints I picked out were made by the same brand, I decided to give their online color tool a try. Most paint manufacturers have some variation of this, but Behr’s is called ColorSmart – you choose one or two colors that you want to use, and the tool makes additional color suggestions to coordinate with your other choices. In my case, I wanted to pair Basketry and Rustic Cream together and wondered if I was in the ballpark with black or navy for an accent color. And wouldn’t you know it? 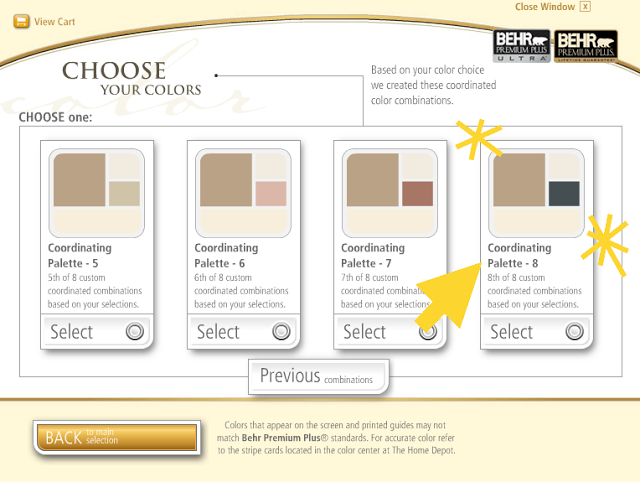 Bam, hybrid. The accent color is called Dark as Night, and is neither black nor navy. Or rather, it’s both. It’s dramatic. It’s moody. It’s drah-moody. And I love it, so right now it’s the top contender.

This post is getting rather long, so since I got too lazy to remove the “other updates” part of the post title promised you additional updates in the post title, I’ll keep the list to just two. First, Charlie has developed a unique feature as of late:  one of her ears has folded over onto the top of her head. It’s like she’s permanently doing a Donald Trump impression. I don’t know if it will stay that way, but for now, it’s really cute.

Second, we’ve got a new sponsor at the The Ugly Duckling House. Fish Foam™ professional grade glass cleaner is a product that claims to not leave any streaks or haze. Considering that Fish Window Cleaning is the largest window cleaning company in the world, you could probably just take their word for it that this stuff really works and call it a day (which also seems justified considering that they sell the product not only in individual cans but by the caseload on their site). Instead, they’ve also sent me a can and dared me and my loud mouth to tell it like it is. And you know what that means – another giveaway! So if you have a moment, stop by their site and take a look around. Then be on the lookout for the chance to win their stuff for free later this week! 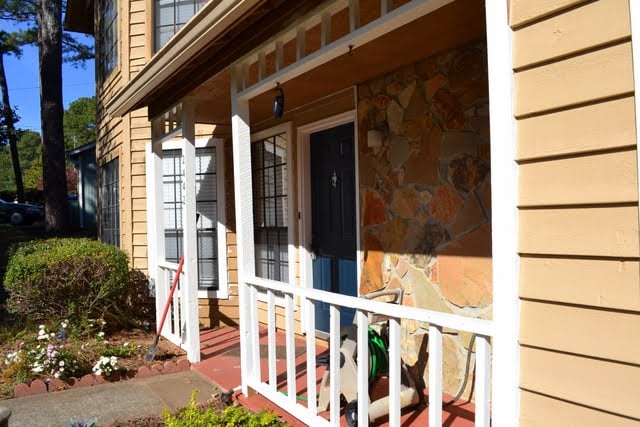 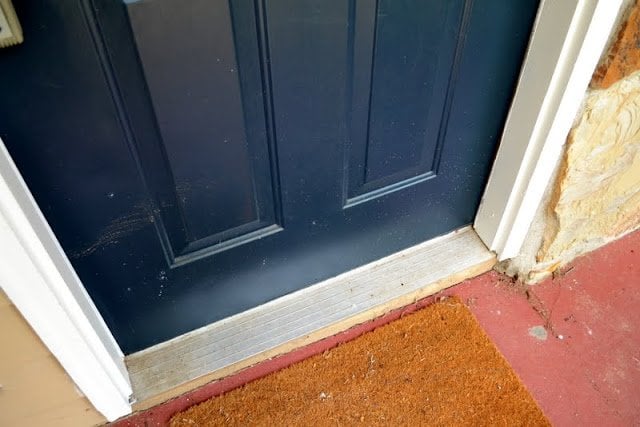 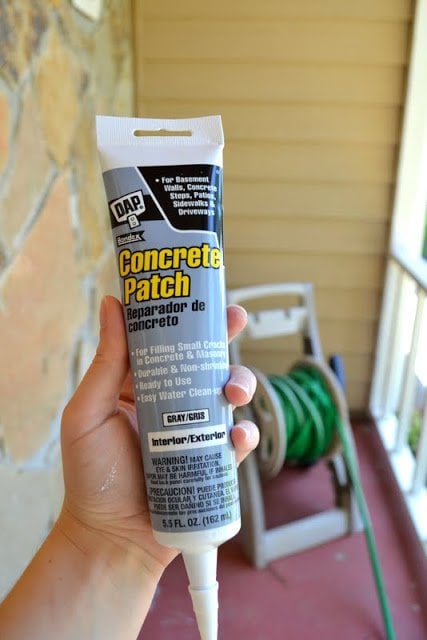 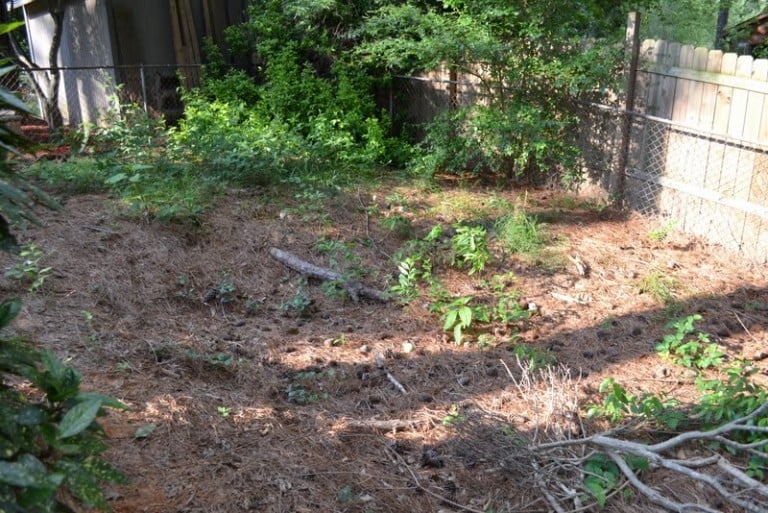