Waiting for a good sale at the local home improvement store is a decent way to save money on gravel or mulch, but if you’re willing to buy in bulk through landscape supply, you can save even more!

Now that we’re heading into fall and cooler temps in the Atlanta area, it’s the perfect time of year to turn my DIY attention to the yard once more (the summer just makes things too miserable to work all day in the heat!). I have a long to-do list, but you guys have already seen a few things already:

So since all of this is obviously a lot of work, I’m breaking it down for you guys post by post (it’s probably both easier for you guys to get all of the details this way as well as easier for me to write updates about). Note that these pictures span the last few weeks of making improvements in a lot of different areas, so you might see peeks of a few of these other projects too. Let’s start with gravel and mulch — a topic that seems boring, but actually makes for an incredible difference in the yard! 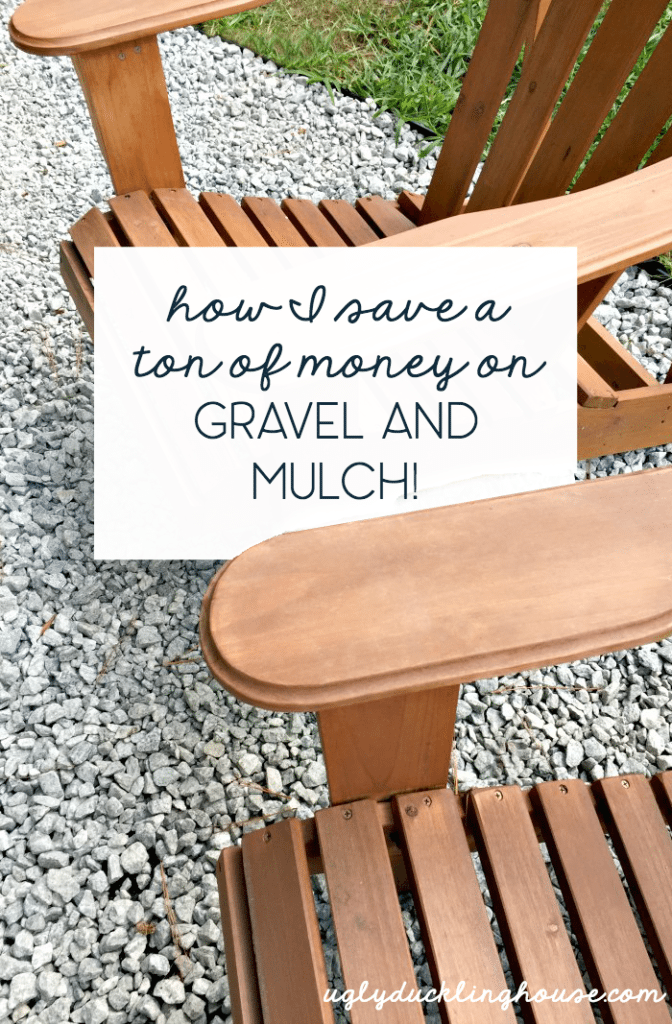 How I saved a LOT of money on mulch and gravel

When I last updated you about the fire pit, we ended here — with the new pit installed (save for a few tweaks, like leveling out that one uneven stone), plus a new ring of landscaping fabric and edging that needs to be filled in with gravel. 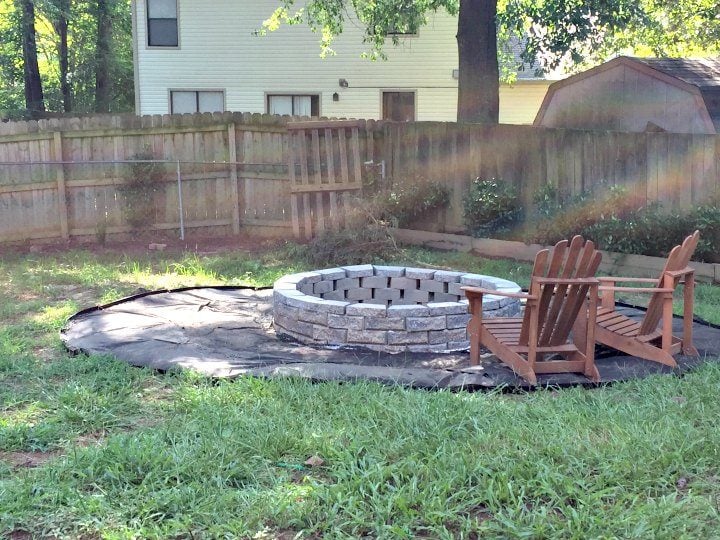 Considering the size of the ring I wanted to fill in, I figured doing things the same way like I did with the space around the A/C unit (with bags of egg rock) would be a really time-consuming process. Things like gravel and mulch go on sale at the local home store at least once a season, but I found an even better source in a local landscape supply. 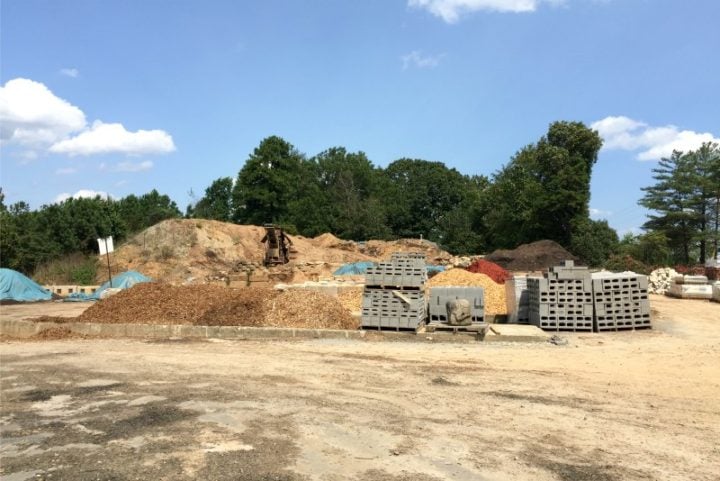 Finding Cheaper Gravel Than at the Big Box Stores

There are a few suppliers in my area, but one of the closest was Green Brothers Earth Works* and had all of their prices listed online, which made it a lot easier to plan out. The general idea was to get half a ton of gravel and see how far that would take me, then go back for more (I now borrow my bf’s truck for these kinds of hauls, so time constraints aren’t nearly as stressful as when I had to get my dad to travel to my house and borrow his). My total cost: $15!!! 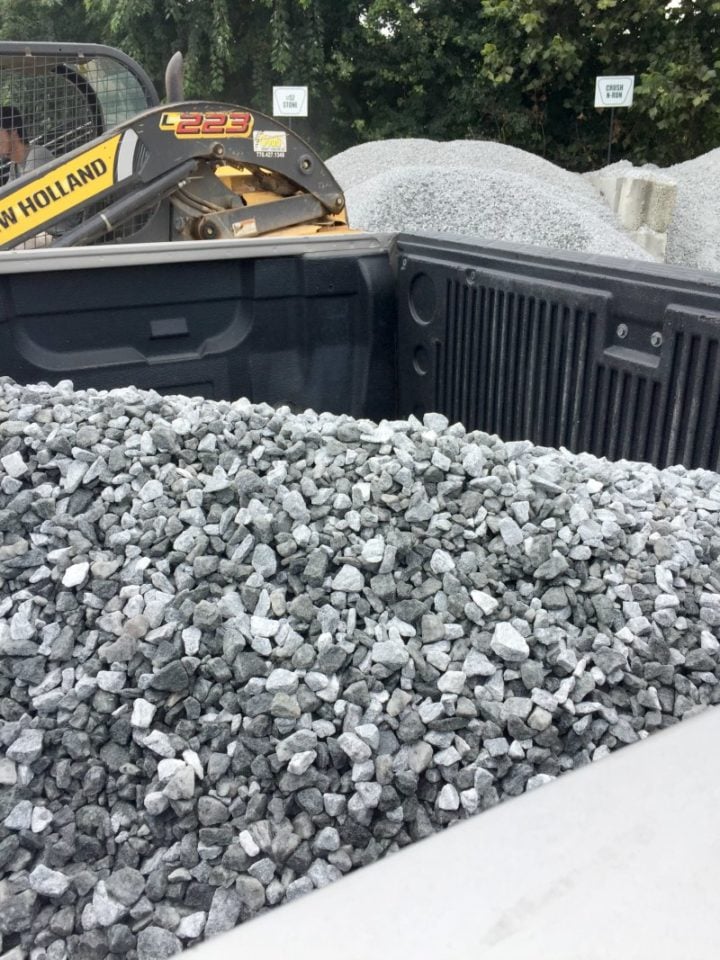 It was fun to watch everything scooped up and deposited into the truck. It was also super straightforward (specify the amount you want to buy at the front desk, pay, drive the truck around, fill) and they have quite a lot of options to choose from. I did some research online before going so I knew already the type I wanted, but you can also walk around and look through all of your options before making a final decision (gravel, mulch, paver stones, sod, sand, topsoil). I chose a crushed granite that was a medium-ish size — the idea being that it would likely stay within the confines of the edging in the yard (small stones like pea gravel have a tendency to spread and travel all over the place, which isn’t the greatest thing for when you want to mow the rest of the lawn). 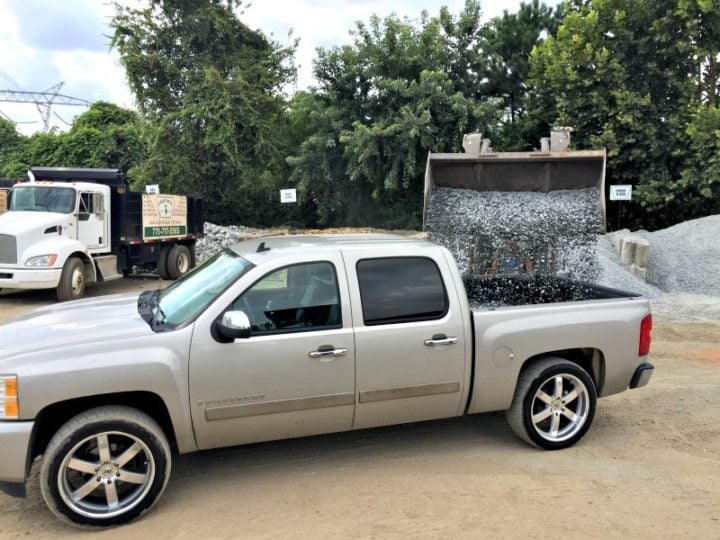 Once I got home, we unloaded everything via wheelbarrow and spread with a rigid tine rake.

When we got toward the end, a push broom helped scoop out the rest from the truck (not particularly interesting, but I thought it was a smart solution). 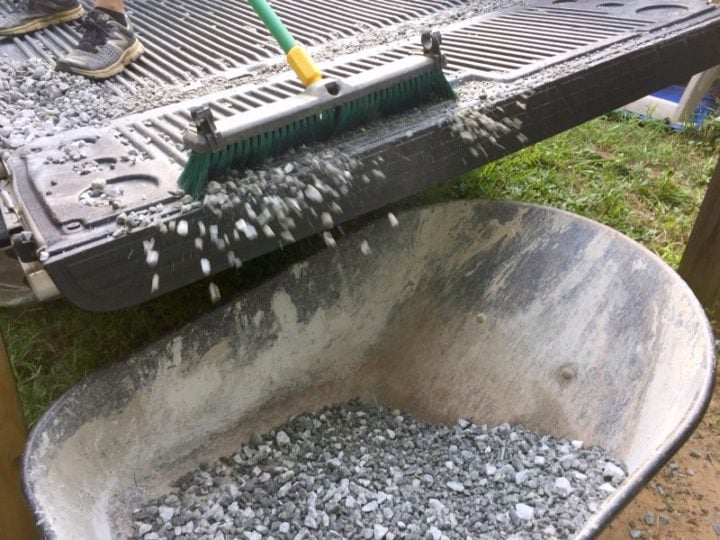 I swear, I wish I’d started going to a place like this sooner. The savings alone! Though I should be clear that even though their prices are listed by the ton, it wasn’t an actual ton of how they measure things out… it’s based on the scoop of the bobcat (one scoop = one half ton, regardless of actual weight). Still, it’s considerably cheaper than the equivalent amount at the local home store when you buy by the bag (which even when on sale is around $4 per bag), so I’m very pleased with finding an inexpensive supplier. 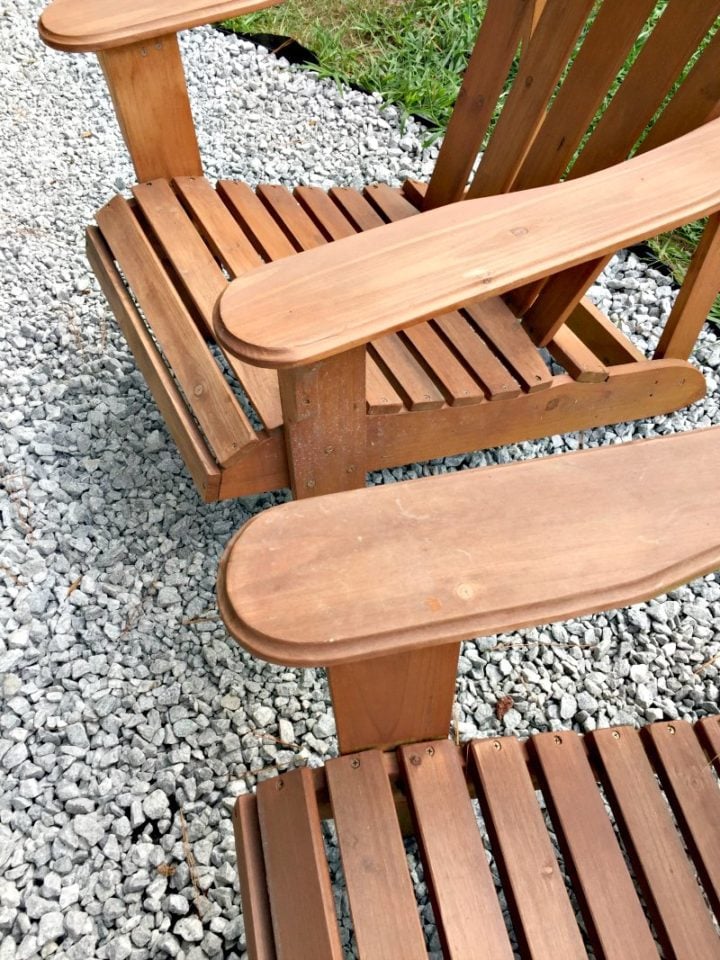 Saving money on mulch — there’s a better deal than bags at the store!

The truckload filled in about half of the gravel area, but I’m going back this week to get another. I also took time over the weekend to get a truckload of dyed brown mulch and spread it around to the rear hedge line along the back fence, in the gardenia beds, and in the corner garden with all of the new hydrangeas (that area also needs gravel, but that will be taken care of with the next pickup!). It makes a HUGE difference in how cleaned up the yard looks! Here’s one example with the back hedge line: before… 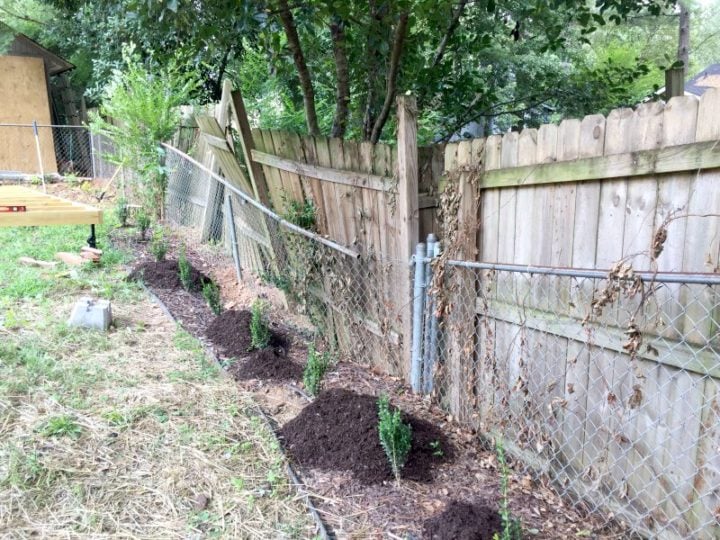 And after! Granted, the chain link fence was also removed over the weekend (I’ll have a separate post about that… along with what happened to my neighbor’s broken fence, sigh), but all the new mulch looks spectacular. 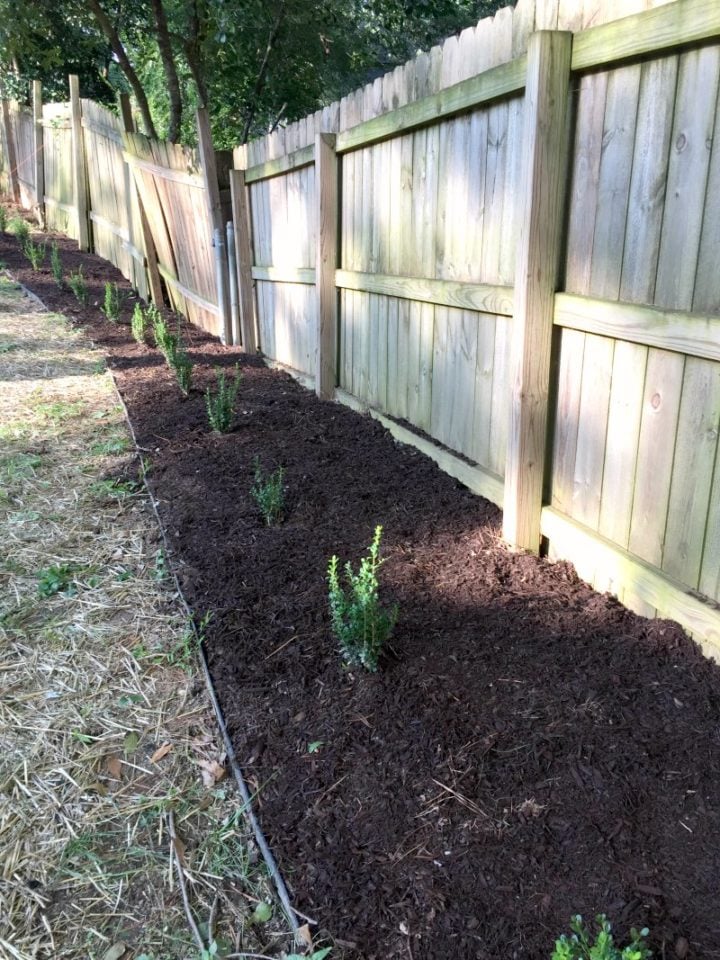 Not bad for pre-fall progress (and don’t forget to pin so you can save this tip for later!)

*Just in case you guys were wondering, this isn’t sponsored, but I know you local readers might want to also check this place out! 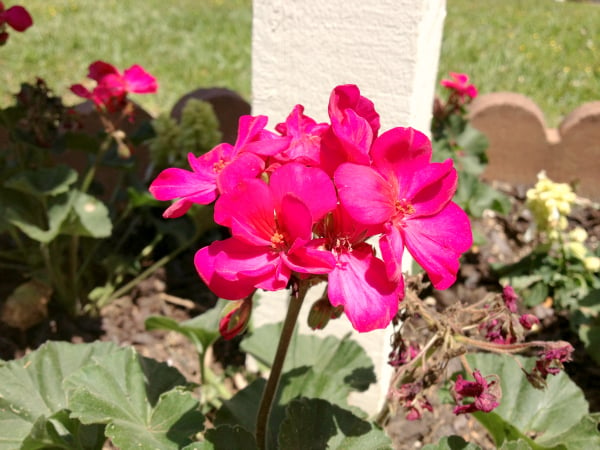 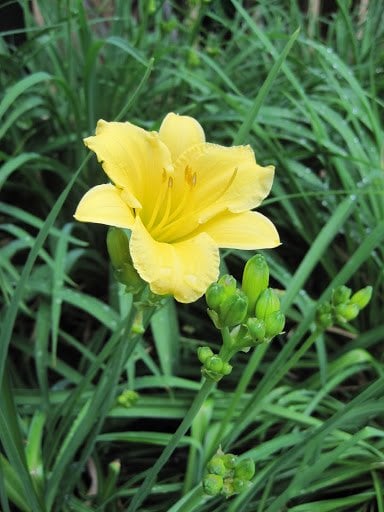 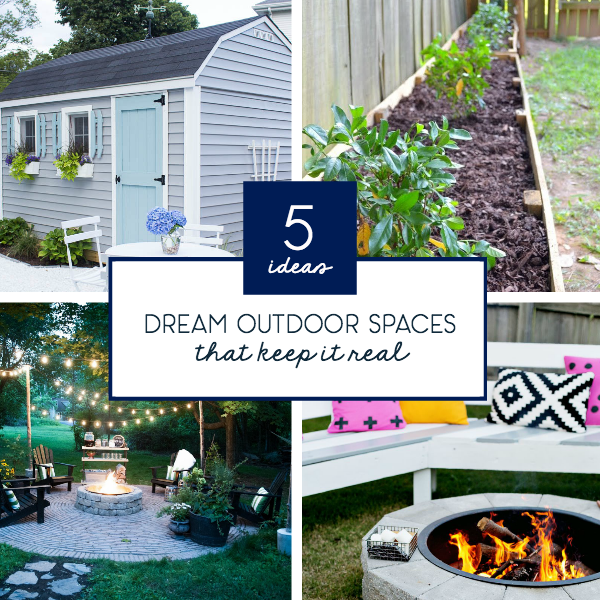