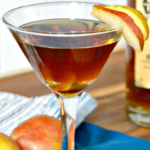 I’ve been craving a cocktail that tastes like fall, and I think I’ve found it: this spiced pear manhattan with homemade brown sugar simple syrup is like having fall poured right into a glass.

So, the story of how I came up with my first cocktail recipe for the blog is kind of a weird one.

First, I was in a local restaurant chain called Marlow’s Tavern. My boyfriend loves their steak, while their “New Old Fashioned” is one of my favorite splurge cocktails (both in terms of calories and the fact that they aren’t cheap). They have seasonal menus as well, and about a month ago, I switched things up to try their “pear manhattan” — whiskey, pear liqueur, and spice. I loved it. The Georgia heat still hadn’t faded yet, so drinking this cocktail was about as close to autumn as I was going to get at the time.

Fast forward to these last few weeks, and I really got a craving for that pear manhattan again. I’ve been saving up for a very expensive trip to celebrate a friend’s vow renewal (first time I’ve used my passport since 2011!), so rather than rack up another bar tab, I decided it might be worth it to finally start learning how to mix these tasty things back at home. Even if the liquor itself might be more costly upfront, it’s better for my wallet long-term, and having things at home where I could serve them anytime definitely appeals to my wants-to-hibernate-all-winter side. :)

It didn’t really go as planned, however.

I found the exact recipe online and had no trouble tracking down the whiskey — High West Double Rye — and the bitters were a quick order through Amazon (affiliate).

The other two ingredients proved to be a little trickier. I couldn’t find a spiced pear liqueur anywhere nearby, and I really haven’t had enough opportunity to travel across town to find it. I also couldn’t find Cardamaro, and mostly had a lot of confused faces when I asked for help in the stores I went to (I’ll admit I was a little annoyed as a customer at all four of the places I went to — clerks not knowing their inventory, the puzzled shrugging at me because they couldn’t identify a good substitute, etc.).

So, I did what I always do when I get frustrated: did some more research, used a little ingenuity, and fixed it my damn self.

First, I figured out that Cardamaro was in the flavor/spirits family of Amari (if I’m even getting all of this new vocabulary right) — basically a group of herbal, sugary liqueurs with bitter notes on the end. So, that meant that even though it might differ from the exact flavor of the one I was searching for, I was in good shape if I could find anything in the ballpark. I found Cynar, which is supposedly more bitter than Cardamaro, but since I love a good hoppy beer (and sad songs), I know I can handle the bitterness just fine. ?

The other ingredient was spiced pear liqueur — of which, I could find exactly squat nearby. I did find a pear brandy, but since that is actually an ingredient in what makes a spiced pear liqueur, it meant that I would need to make the liqueur homemade, or else the cocktail would be all booze (not that I tried it like that, coughcough).

To make the liqueur, I needed to mix the brandy, pears, spices, and simple syrup… which I also didn’t have. But I figured that since simple syrup is just a 1:1 ratio of sugar and water over heat, that would be the easiest part.

Except, upon looking through my pantry, I didn’t have any regular sugar. I only had brown sugar. It was old and needed to be broken up before I could actually measure it out (holy hell, this cocktail better taste good).

At this point, I was both more determined than ever and also laughing at myself on these obstacles. I’ll post the final spiced pear liqueur recipe separately once I get it just right, but since it’s also supposed to be pretty good with fruit and ice cream, there’s no harm in posting about it twice (once I do a few taste tests of said ice cream dessert, of course).

Anyway: brown sugar syrup, then mixed with brandy and another pear, then allowed to steep for a little while in a mason jar. I learned that simple simple syrup (with no fruit or spices added) actually lasts much longer than when it’s flavored, so I’ll have to try that next time.

After all of that, I most definitely needed a drink. As it happened, I had one ready to go. ;)

This spiced pear manhattan made frm brown sugar simple syrup is all of the best fall flavors swirled into a single cocktail.

To make the simple syrup

To make the liqueur

To make the pear manhattan

With these shots, I think you can kind of also see the evolution of my learning how to work lighting around a smaller object (since normally I take photos of DIY and rooms, taking food pictures is like learning how to take blog photography all over again… not that I was an expert at it before).

Not to mention, working during the winter (getting dark around 5 now!) and with my only source of natural light at the kitchen window, having the space to really capture color and texture is a lot tougher than it looks! I want to work on making the light a little softer in the future, but overall, it turned out as I wanted: it tastes just like fall.

The cocktail also looks pretty snazzy, if I do say so myself. Do you have a favorite fall cocktail?

P.S. For more cocktail ideas, you should check out my contributors, Biscuits and Burlap, who are sharing some of their ideas periodically on this blog as well in my Recipes section — to keep us all well-imbibed during this awkward-family-interaction season. ;)

more recipes
While every effort has been made to ensure the accuracy & effectiveness of the information displayed on this website, The Ugly Duckling House is for entertainment purposes only. All tutorials and demonstrations are not intended to be professional advice (nor substitute as such), and I make no guarantees as to the procedures and information here. Creating with my suggested methods, materials, and tools is under your own risk. Please ensure you are following proper guidelines with anything used, and seek professional advice if you don't know how to do something! Read my complete disclosure here.
344 shares

« The $3 Cure for Last-Minute Decorating: Eucalyptus Greenery
The Saddest Little Guest Bedroom, Probably Ever (and Video!) »