The last week of the year can be pretty cathartic; I get to purge the past year’s misgivings, look back at favorite projects, and start making plans for a better year to come. But, I can’t deny that I also have a tendency to dwell more on what I didn’t accomplish rather than what I did. And I was going to, until I realized that I actually set and met a lot of the goals I made for 2015. Weird. 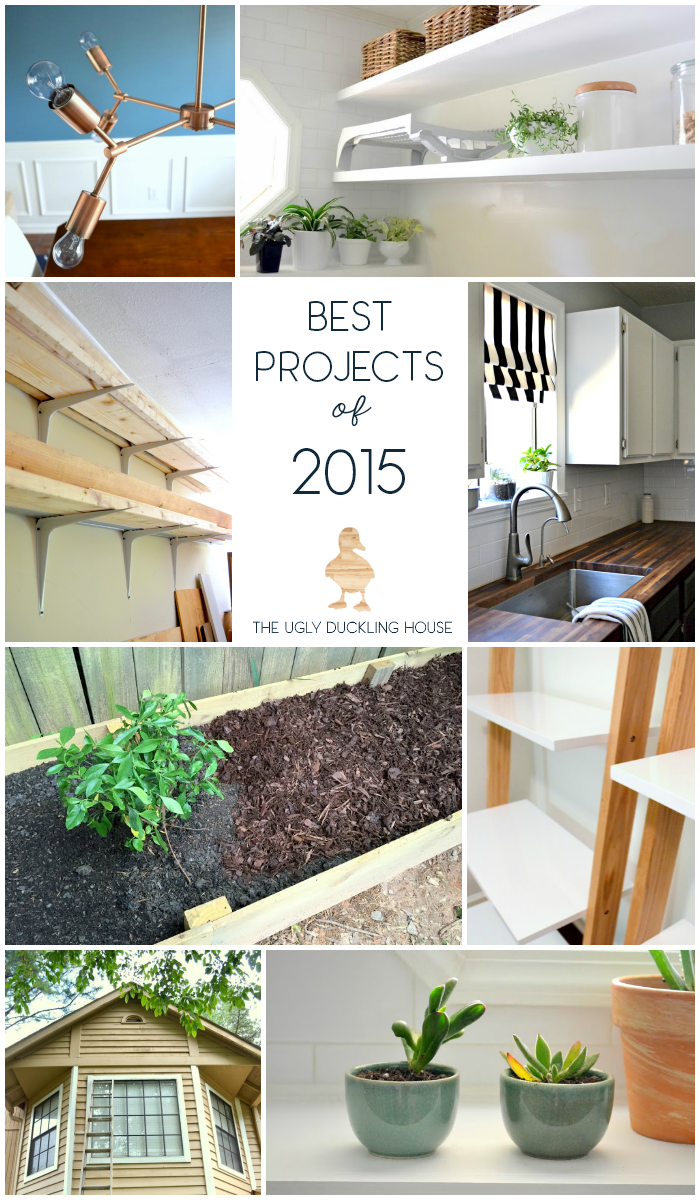 First off, I’ll start with the personal stuff and a few blog goals, since they all kind of tied together.

Create a separation between work and home, declutter, get outside: This year, I wanted to force myself out of the house more often as I learned to manage working from home. I also wanted to declutter the things around me, which would also help me to feel less buried by being “busy” and more free to untangle. And the result? While I’ll probably never find (and honestly don’t believe there is truly such a thing as) a true “balance” between work and home, I did a much better job of recognizing when I need a break — and here’s the important part — taking them when needed. 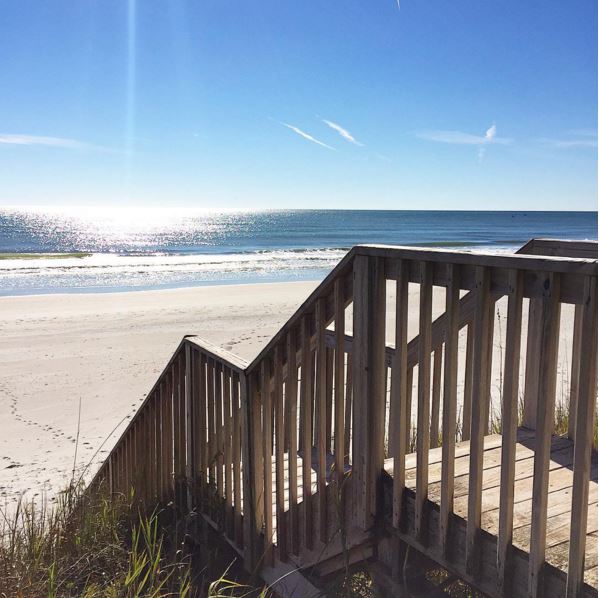 For starters, I joined a weekly running group and a weekly softball team; this got me out of the house and gave me a schedule that required accountability to others that I needed to work around, which led to better time management. In 2016, I’m planning on joining another softball program that will mix things up even more. I wouldn’t necessarily recommend forcing yourself into more activities in order to declutter your life, but this made a lot of sense to me and opened the door for a slew of new friendships, which I will admit I really needed this year. Especially since even though I did force myself out of the house for dating as well, that was far less fruitful (that felt more like a backslide, actually).

I also took a few more trips this year… and some of it was to see familiar faces (though not always human). 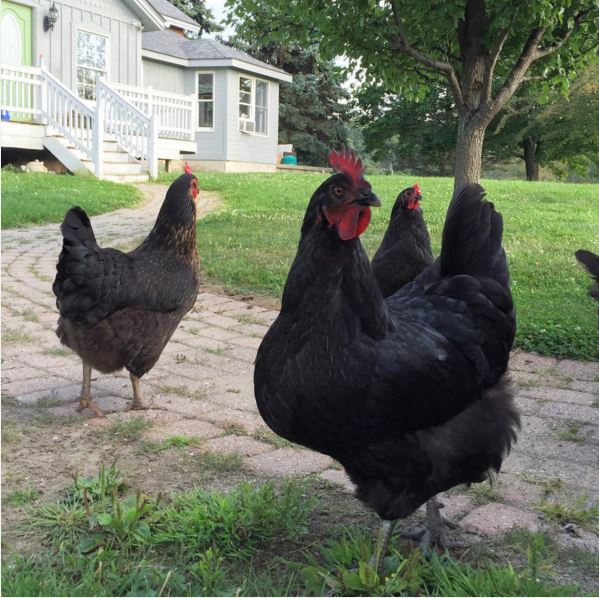 As for decluttering in general, I did a lot more inventory this year: professionally, financially, socially, physically, etc. I took 300% more trips to Goodwill than I did last year. I spent more time on friends I wanted to know better and let the toxic ones go. I feel like I purged more things from the house than added to it, and while I still have plenty room for improvement (though not more stuff!), I know I did better than 2014… which means setting the same goal in 2016 is going to be worth the effort.

The Great Purge continued yesterday. Cannot find my keys today. Proving once again that in this house, cleaning is a punishable offense.

Blog more frequently, more honestly, get creative: Okay, so I didn’t necessarily publish posts on as structured of a schedule as I first intended, but I do think that I put more effort into blogging in my own style this year, and I do feel like it paid off (for me, anyway). I really enjoyed writing certain posts, and I hope you guys enjoyed them too; I’m also glad I allowed myself to share my grief over losing a loved one. Suffice it to say that if there’s something that’s worth talking about, I will and have, and it’s led to some interesting discussions. Especially because of the comments I get from badass readers on posts where I let myself open up more (as always, you guys ROCK). 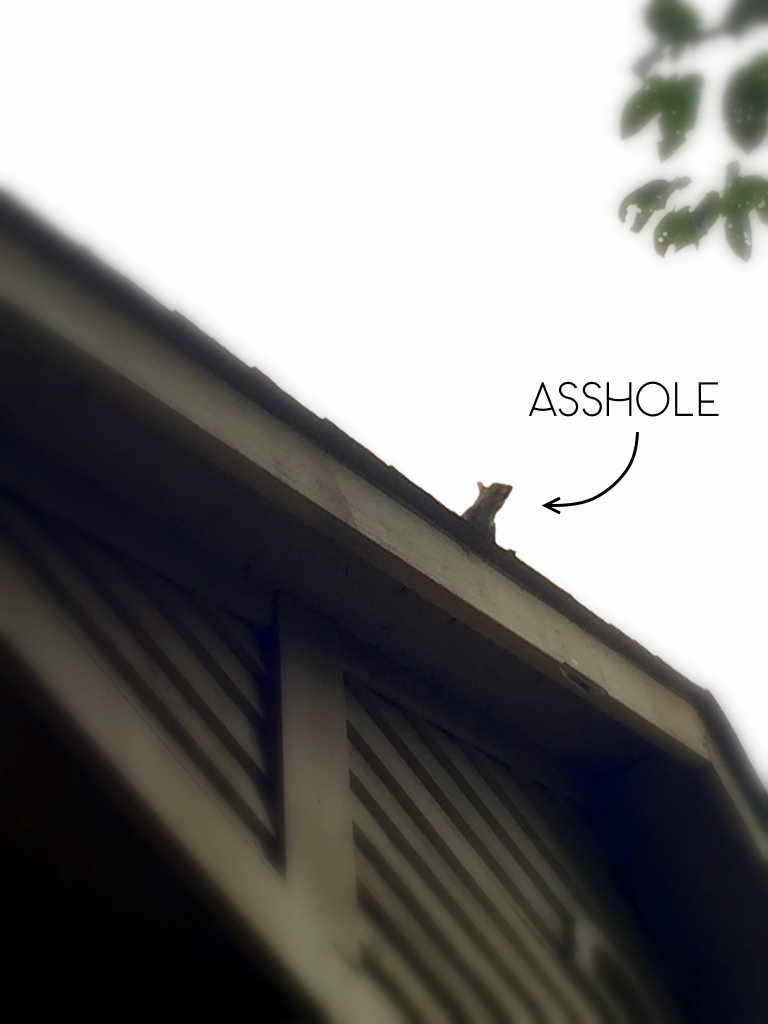 I also pushed myself to do some creative projects. While not as frequent as I first scheduled myself to do this year, they were a lot of fun, and creativity tends to morph and inspire in different ways over time. So, more of that in 2016 for sure. 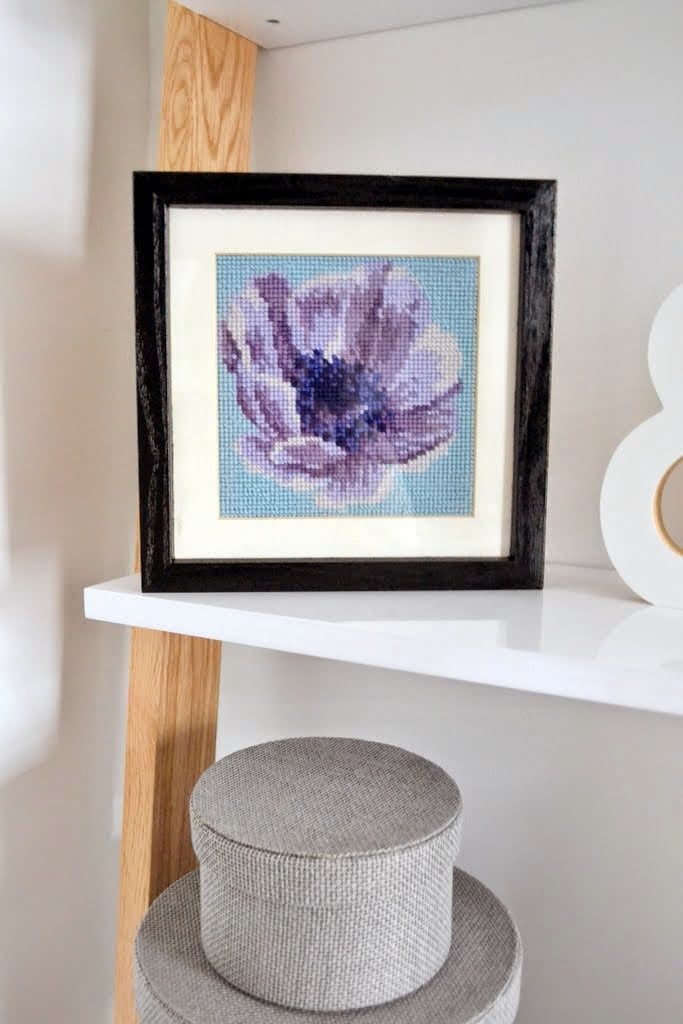 Alright, this is mainly a DIY blog, so let’s get to the juicy stuff.

The kitchen: I did, in fact, manage to finish the walls, get some window covering up, and complete a few other random things (even enough to actually decorate for the holidays!). There are finishing touches and a few surprises still left to go, but I told myself to make this a functional room again, and it is. I can even brew coffee in it without getting drywall dust in my cup. 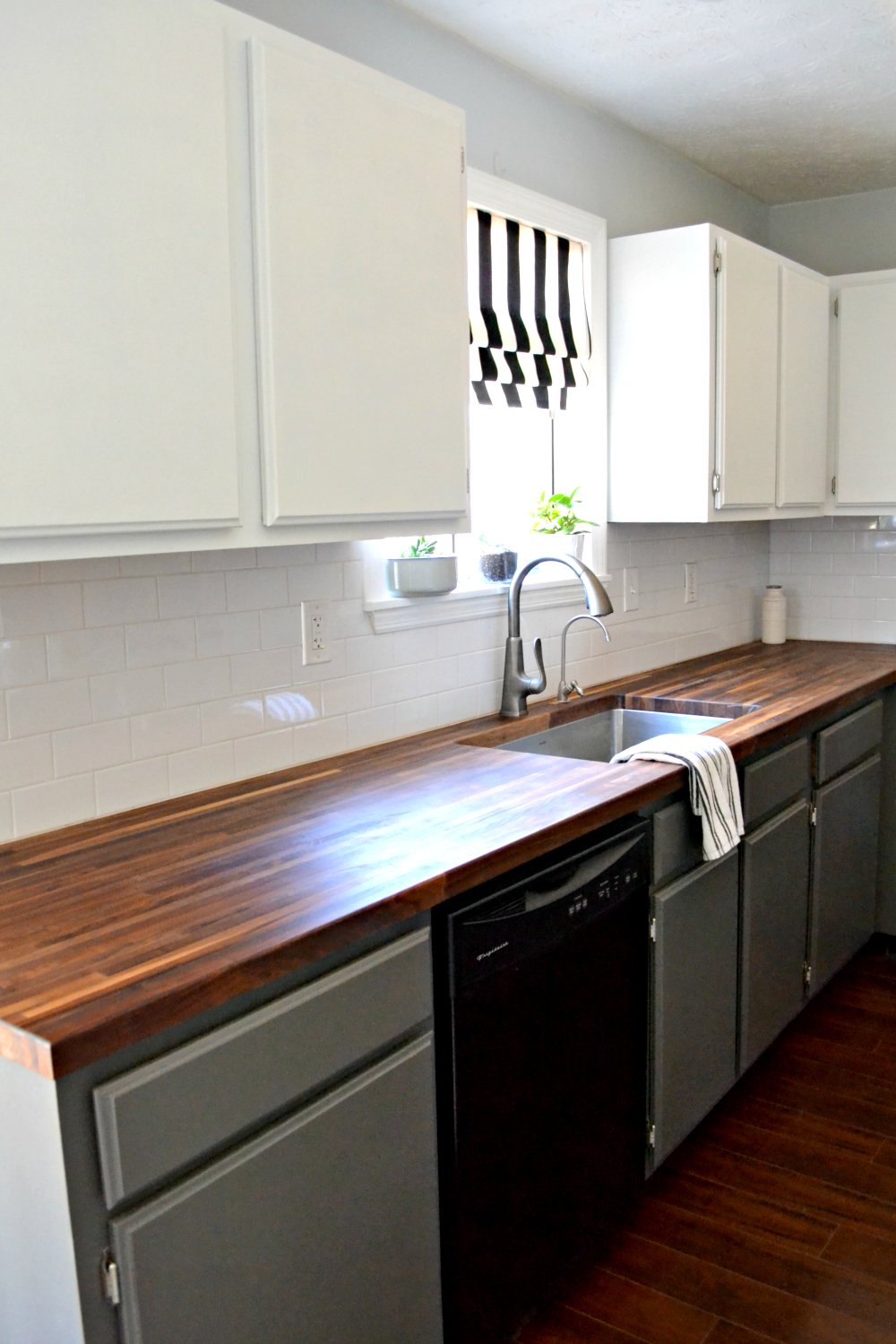 The laundry room: I added crown molding, floating shelves, plants, and started building the countertop. Not finished, but not half bad for a project that wasn’t my only priority. 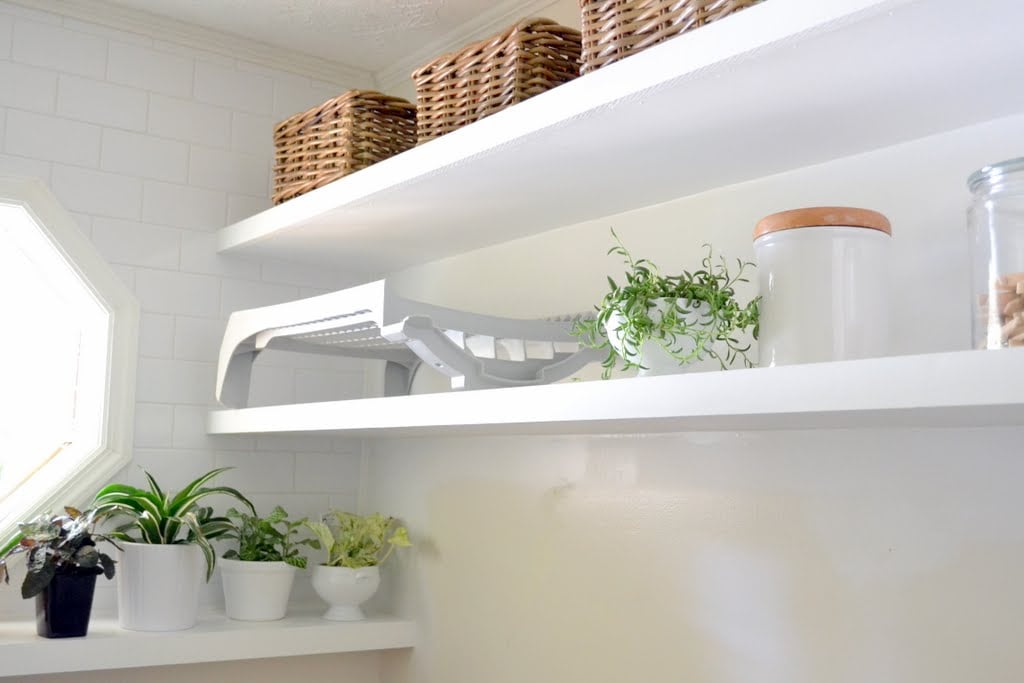 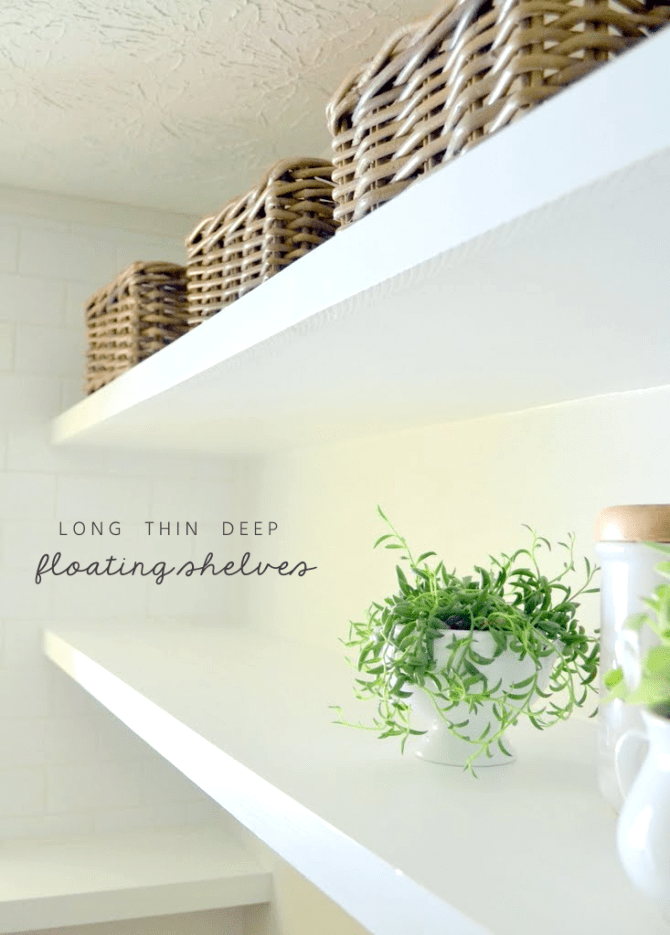 The office: Okay, this room still has more to go too. But I did get it far more organized, added some bookshelves, added some nifty storage spaces, and will soon be sharing the new DIY light fixture! 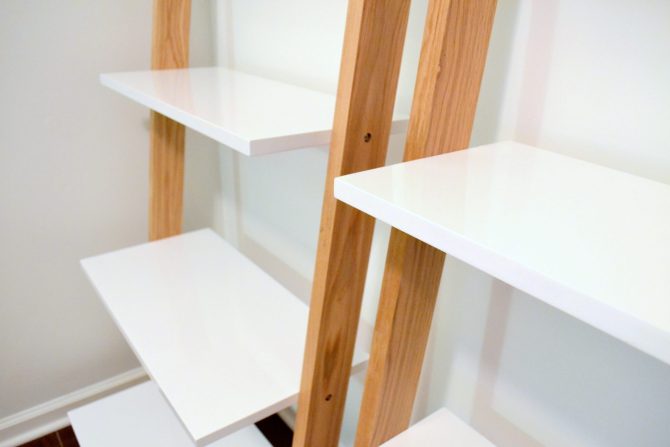 Landscaping and exterior work: out of all of my home goals in 2015, I feel that this definitely wins the Most Improved award. Not only did I take out pine trees from the front and back that helped with yard and roof maintenance year-round: 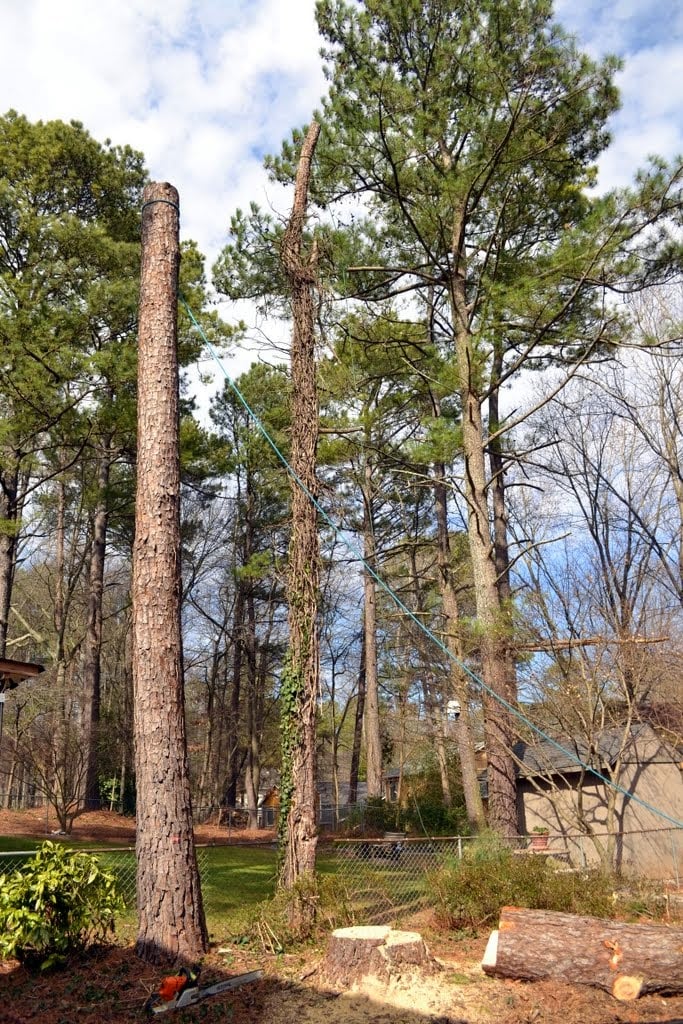 …but the repair work needed on the exterior siding was completed: 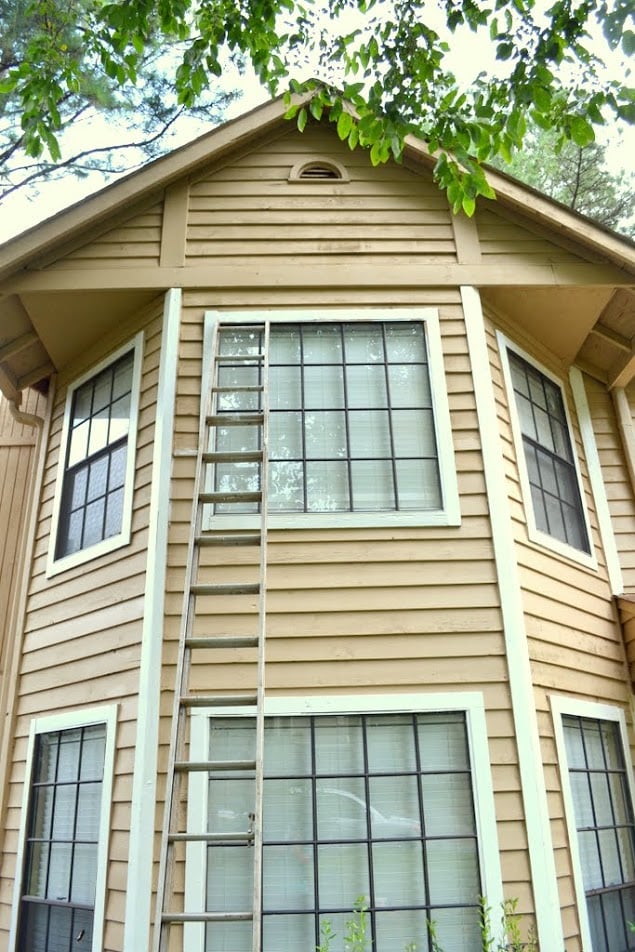 …the front trees were trimmed back, and I found a reliable landscaping guy to take over some of the irksome jobs so that I could concentrate on other projects. 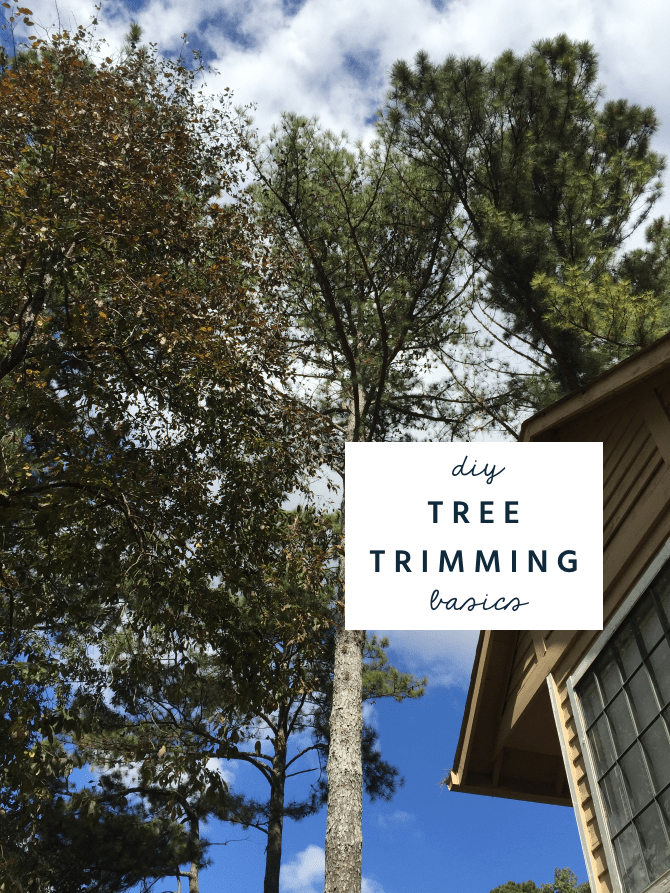 I also built some great DIY garden beds along the back yard fence line and improved the garden area along the side of the house. 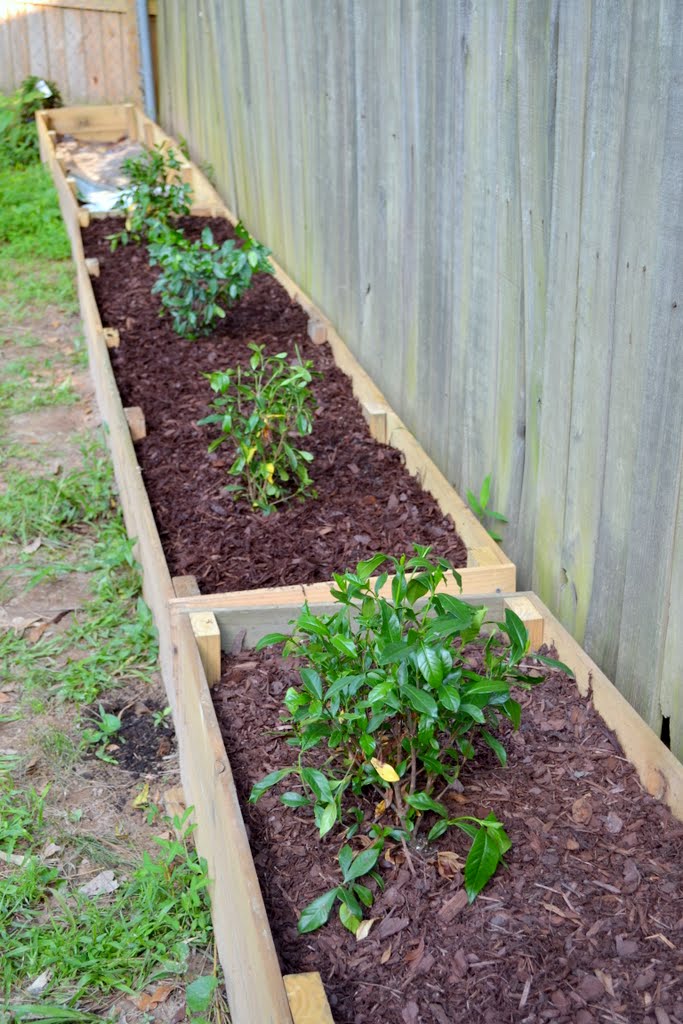 My landscaping guy has been helping me prepare the back yard for more improvements next year (so so excited!), so I am really looking forward to what the next 365 days will bring. More on that later. 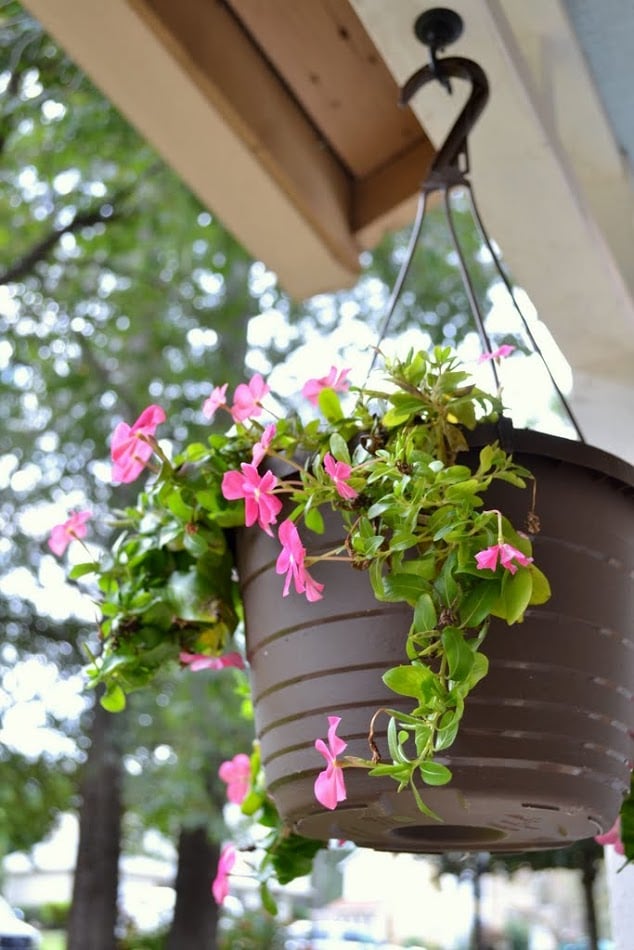 Other rooms: I can’t stay in one room for too long without wanting to do another project elsewhere, so there was nothing unusual about a few other rooms that saw improvements in 2015, such as my dining room light fixture. 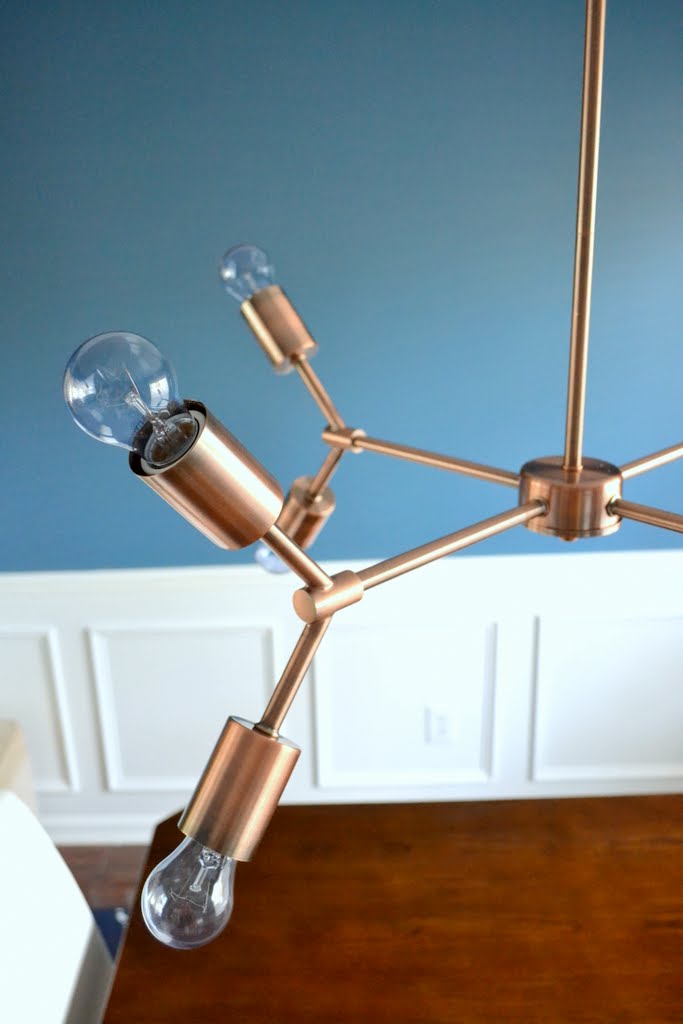 I also realized that I was going to have a much easier time with DIY projects if I had a neatly organized garage, so after cleaning it out and reorganizing, I added a lumber rack using some inexpensive materials, built in a new pegboard wall, and installed new lights that give me much more light to work in! 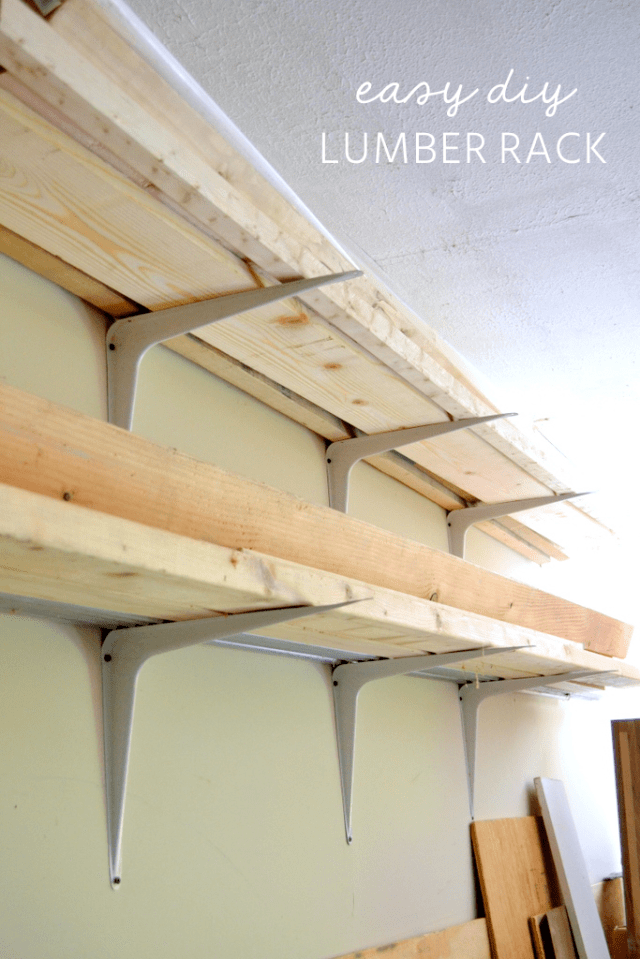 And not to mention, I got to actually decorate for Christmas! As in, my house was actually organized enough to decorate for the holidays without things like paint cans and step ladders in the way. Score for 2015! 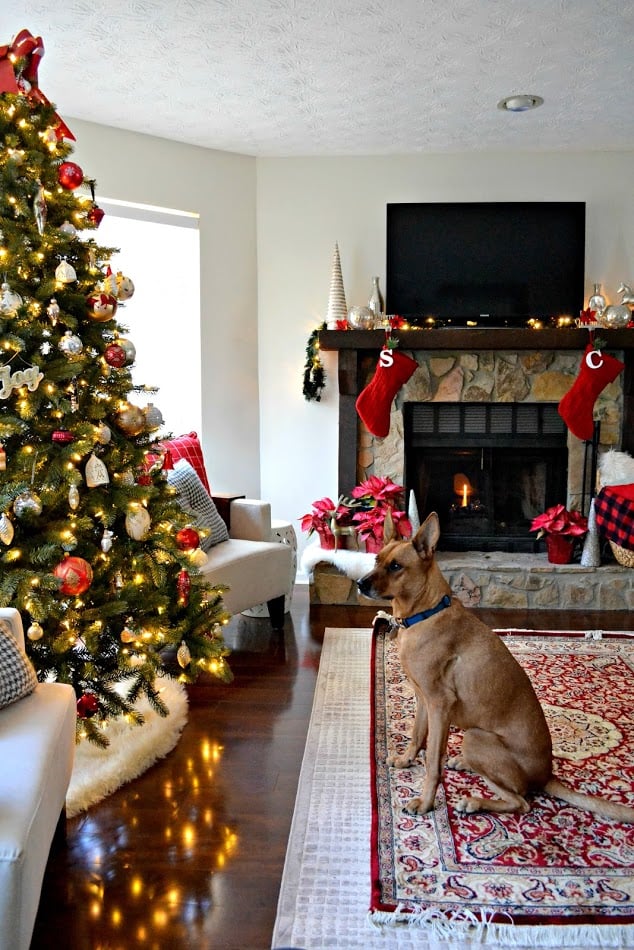 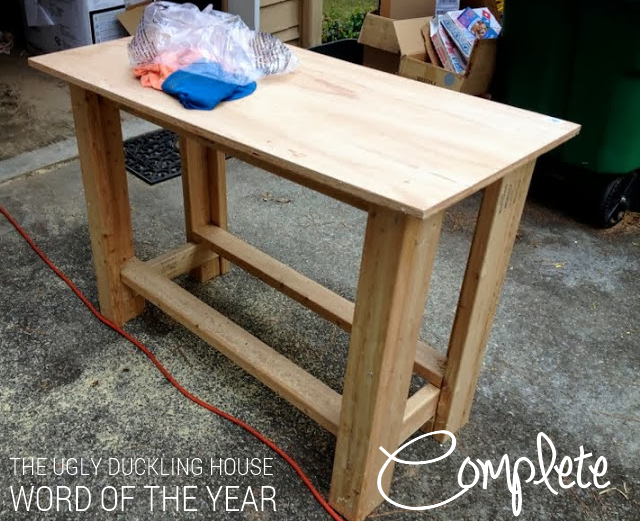 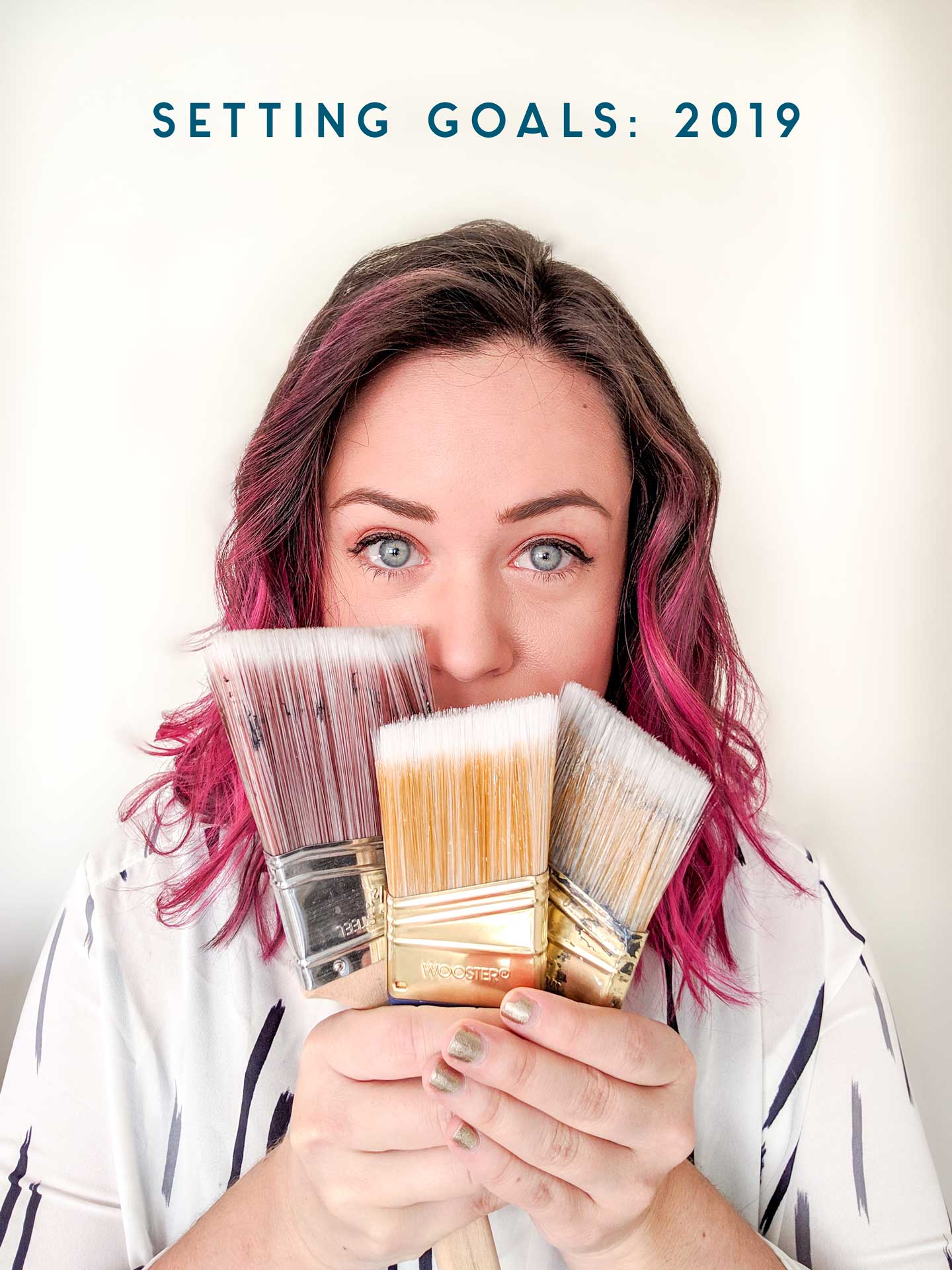 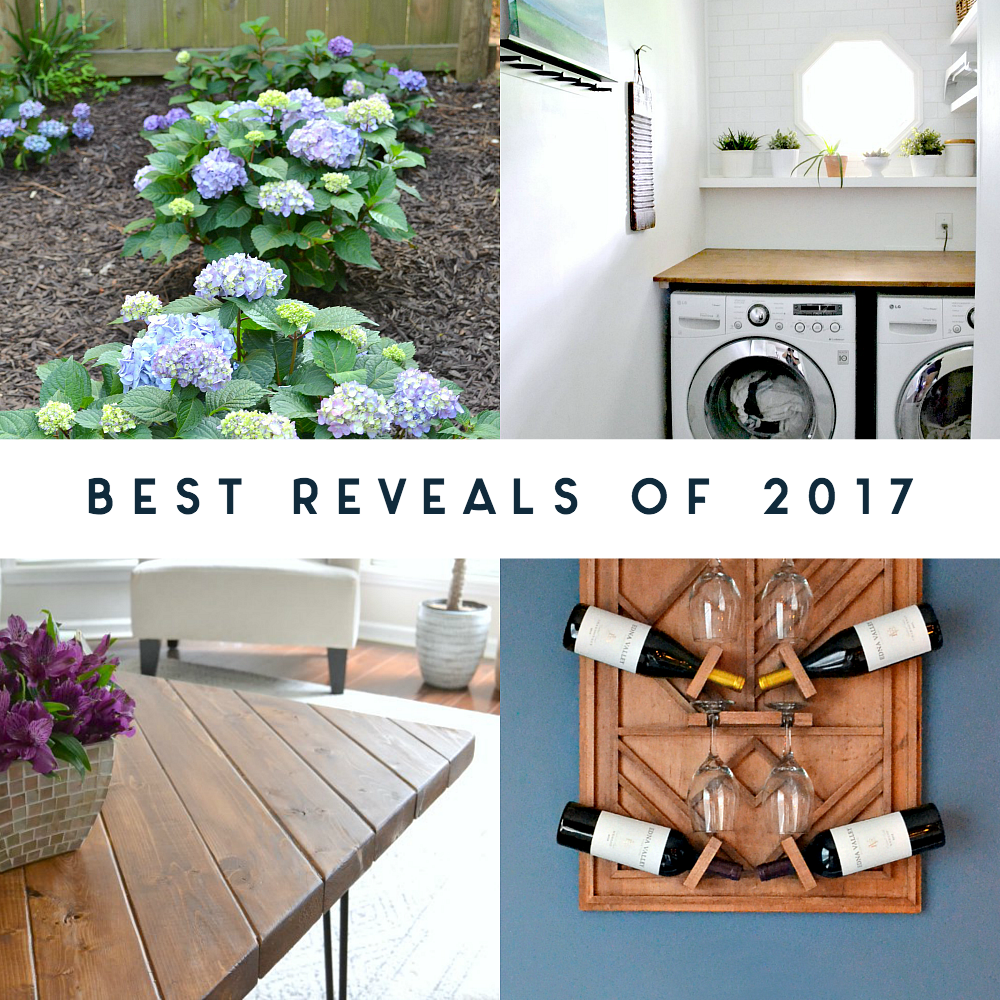 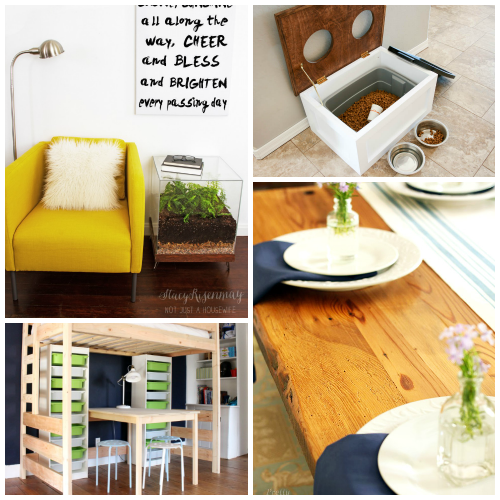 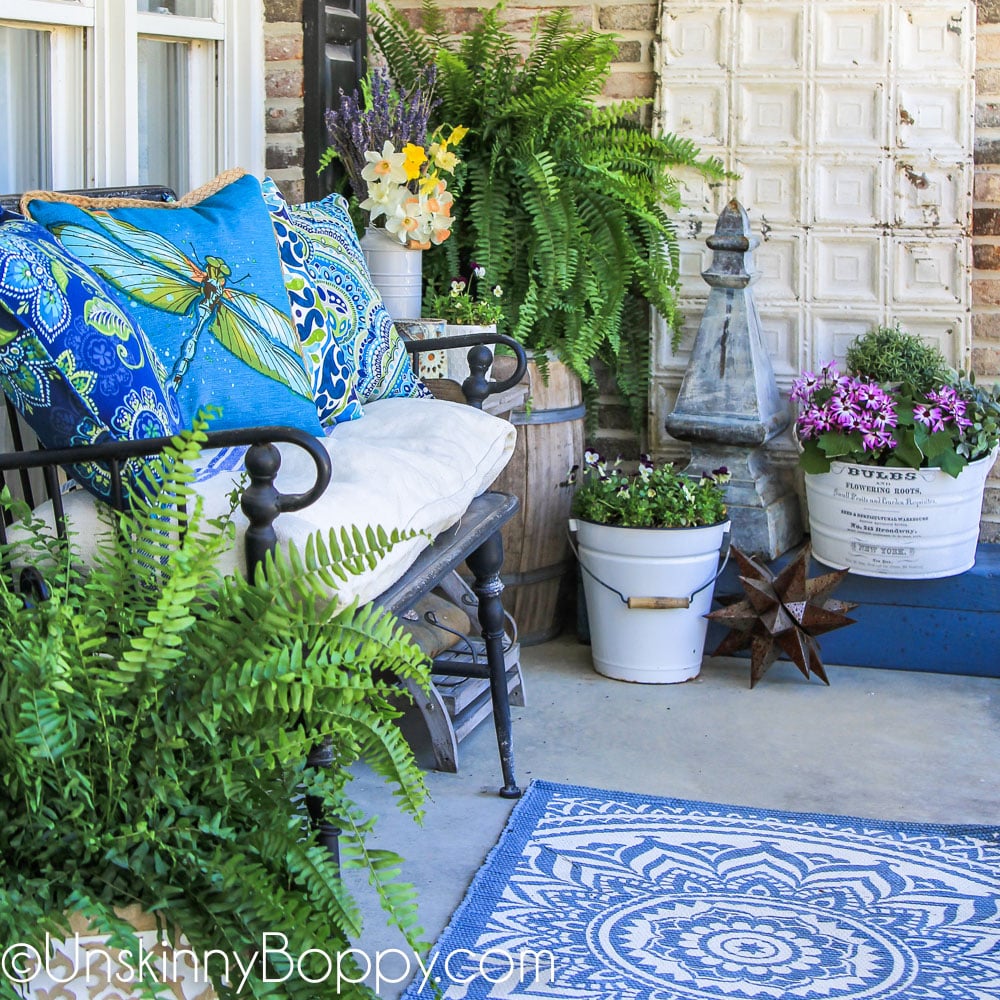